What I’ve learned about living in Geneva (so far) 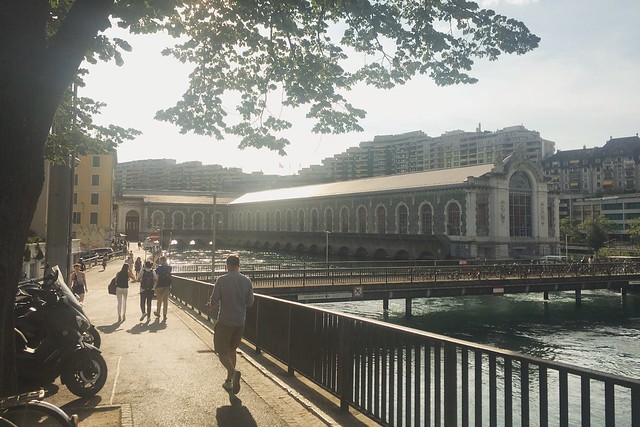 Today marks… 37 days since I relocated to Geneva!

These 37 days have simultaneously felt like a) the blink of an eye and b) forever. For me, the move happened rather quickly; I was offered the job at the end of June and relocated in mid-July. I did have some time to read up on the quirks of living in Switzerland, but there is still so much to learn yet. In the meantime, here are some things I have learned in my first month.

Public transit operates on an honor system. Unlike in DC, where you’d swipe your metro card when getting on the bus, here you either need to hold a monthly/yearly transit pass or buy your ticket in advance at a cash-only vending machine next to the bus stop. There is technically nothing stopping you from just jumping on the bus or tram and riding it gratis except for the possibility that you might get caught during a random ticket inspection.

The Swiss take recycling seriously. The recycling system here is very meticulous; my apartment building has separate containers for regular trash, paper, and compost in the basement, and there is also a recycling station nearby with designated containers for aluminum, PET bottles, and glass (in several colors, too). I’ve started composting for the first time, since it’s so convenient.

You have to weigh your own produce. Whereas in DC, you could weigh things like unpackaged fruits and vegetables during checkout, here you have to take these items to a scale, weigh it, input a number associated with the type of produce, and wait for the scale to print out a custom bar code for you to stick on the produce. This was one of the first things I had to learn about grocery stores in Switzerland (and #2: the fact that they don’t refrigerate eggs. WUT.)

The Genevois do speak English, despite what they might tell you. In my first days here, I’d go up to a counter, inquire if the person spoke English, and they’d be like, “ehh, a leetle.” And then proceed to have a perfectly fluent conversation in English with me. That’s no excuse not to learn French, though; public signage, product packaging, websites, and restaurant menus are rarely available in any language besides French, and the locals will always speak French to you by default. I do find myself requesting English less and less, thanks to my (helpful but torturous) French classes. Today I managed to get through my first hair appointment in Geneva–speaking only French.

Unfurnished means LIKE REALLY UNFURNISHED. It blows my mind that a lot of apartments here don’t come with refrigerators or stoves. Like, I can understand not providing a microwave, but I visited one apartment that was like “the previous tenant is willing to sell you their stove.” Me: ?????

Friendly neighbors. I am constantly surprised by how it’s almost a reflex for my neighbors to greet me when we pass by each other or get in the same elevator. “Bonjour/bonsoir” when we first see each other, and “au revoir/bonne journée” when we part. It always catches me off guard and I sometimes forget to say it back.

Amazon isn’t a thing in Geneva, but there are plenty of other sites to do online shopping. I was at the post office today and saw five Zalando packages on the pickup shelf; it’s an online retailer mostly for cheap-ish clothing and shoes. I bought a pair of work loafers for around 30CHF, and they are not super comfortable, but the delivery was lightning fast (I think only 2 business days). I’ve also used Brack to purchase kitchen stuff, like a steamer and a toaster oven. I used Ricardo, a popular site for mostly secondhand deals, to buy a deeply discounted Nespresso machine, but then Ricardo suspended my account because I have a ‘c/o’ in my address since I’m on a sublease. And then thankfully there are plenty of sellers on Ebay and Etsy who ship to Switzerland.

Still trying to figure out how to watch my favorite TV shows legally. I can’t watch Hulu anymore because apparently it’s not available outside the US, so I have no idea what’s happening on The Handmaid’s Tale. I also can’t watch NBC here, so I need to figure out how to watch The Good Place when it comes back next month. Would rather not have to deal with VPNs, so hoping to find a solution soon.

I’ve only just scratched the surface of life in Switzerland, of course. Looking forward to what the next year will bring.