I am back from a short but satisfying weekend in Amsterdam! This was my first trip to The Netherlands, and I am already looking forward to going back in the springtime, when tulips are in full bloom.

For this trip I flew with KLM. It was only 1h20m each way by plane, so the timing worked well. I worked from home on Friday and took a bus to the airport a little after 5pm. There were delays due to bad weather in Amsterdam; I landed after 9pm, took an 18-minute train to the Amsterdam Centraal train station (cost: 5.5 EUR), and then walked 5 minutes to my hotel. 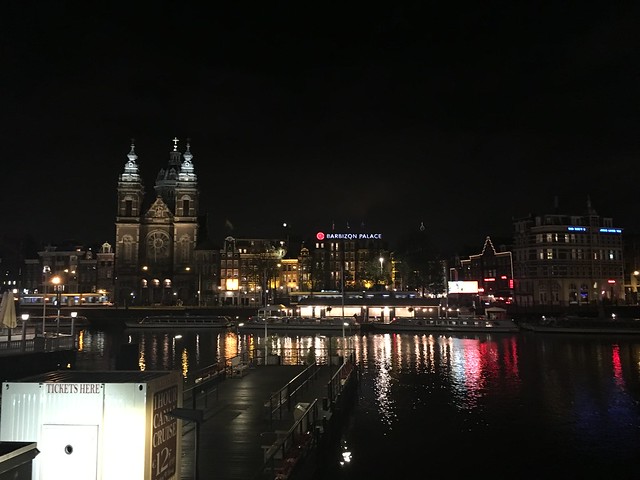 Greeted by this scenery walking out of the train station. Amsterdam at night is a vision. 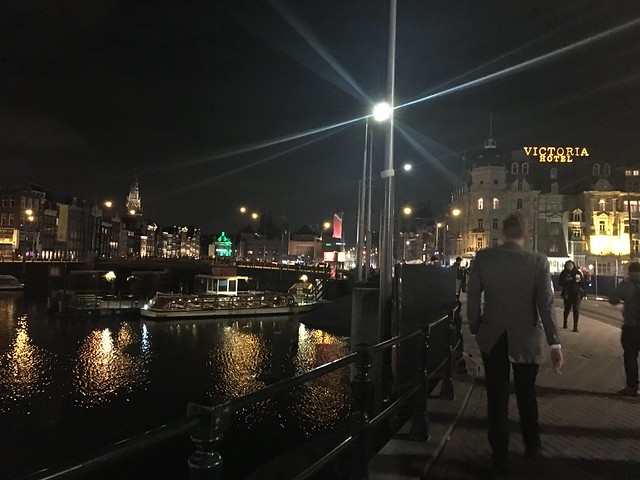 I was not a big fan of the hotel I stayed at this time. I had booked a boutique hotel called The Exchange, which claimed to have 61 rooms each decorated in a unique and artistic way. The photos on the website were cool, funky and modern, with lots of minimalist white spaces and bold art installations. So imagine my surprise when I arrived to this. 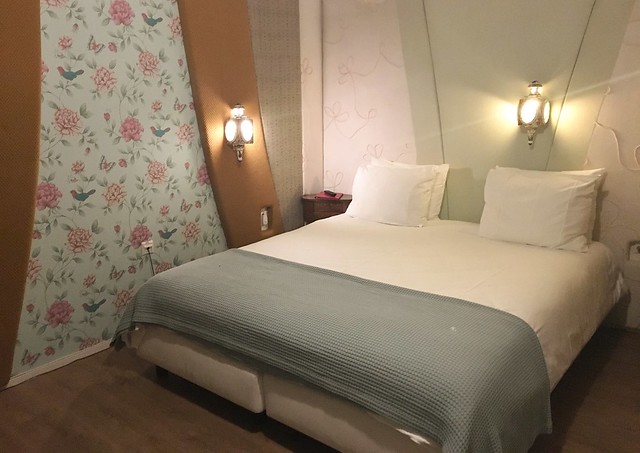 I suppose it was, in a way, minimalist — there was no closet, no chair (unless you count a tiny loveseat that only fits half of one’s butt), no mini-fridge, and no tub or sliding doors for the shower. I am only complaining so much because it was such an expensive hotel stay at over 500 EUR for 2 nights, and the value for money was just not there.

On to the main day of events.

I really only had one day to explore Amsterdam, so Saturday was PACKED with activities. At 9am I headed out to the Van Gogh Museum, which was a half-hour walk away. 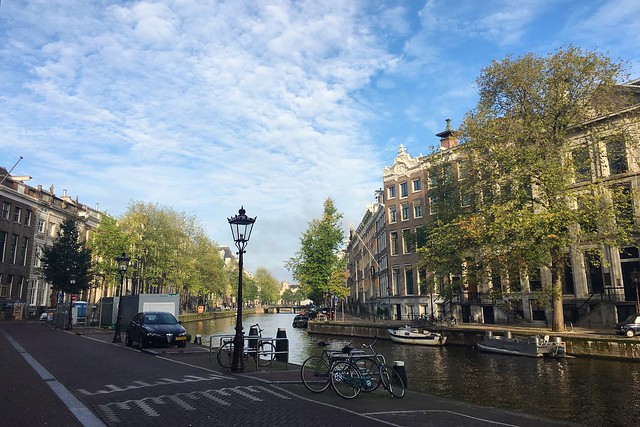 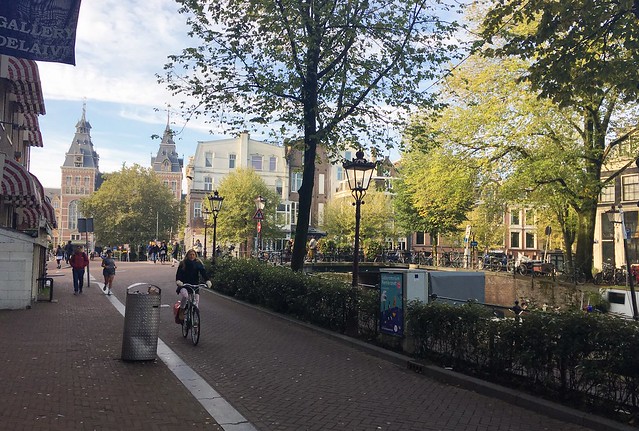 I don’t really know anything about art or art history, so this was not a particularly enlightening experience. I saw the bedroom painting, though the more famous ‘Starry Night’ turned out to be in MoMa, which was closed for renovations when I went to New York earlier this year. 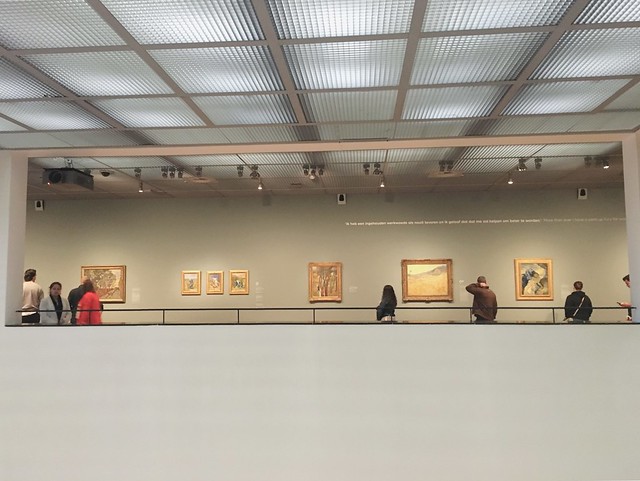 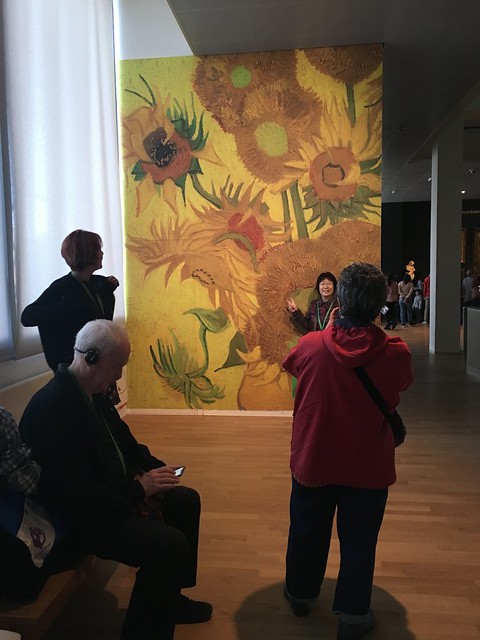 One fascinating thing I did learn from the museum was the relationship Vincent van Gogh had with his brother. Theo was three years younger, but supported his older brother financially for all of his working life and just really believed in him and his art when nobody else did. They wrote to each other every week, but the vast majority of the letters that survive are from Vincent, because Theo meticulously kept every letter from his brother whereas Vincent didn’t. But it’s clear how much Theo cared about him. I spent a lot of time on this website afterwards, reading the full text of the letters. 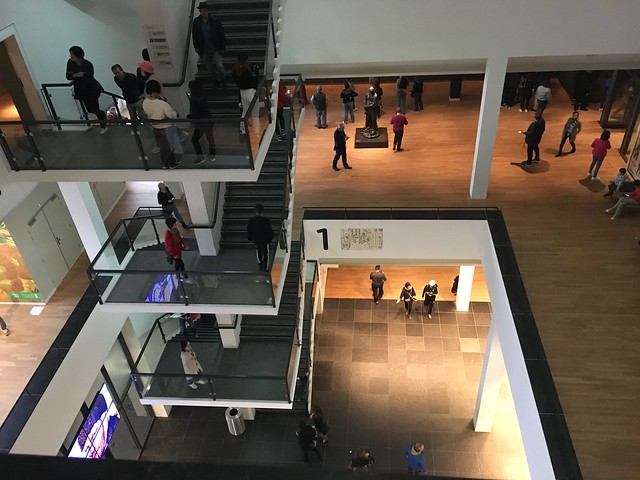 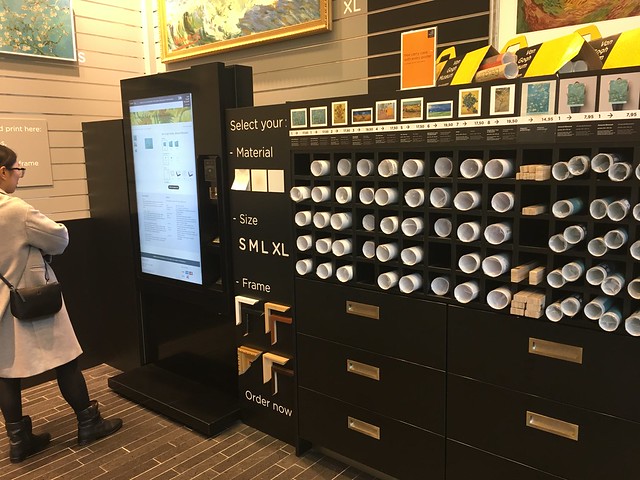 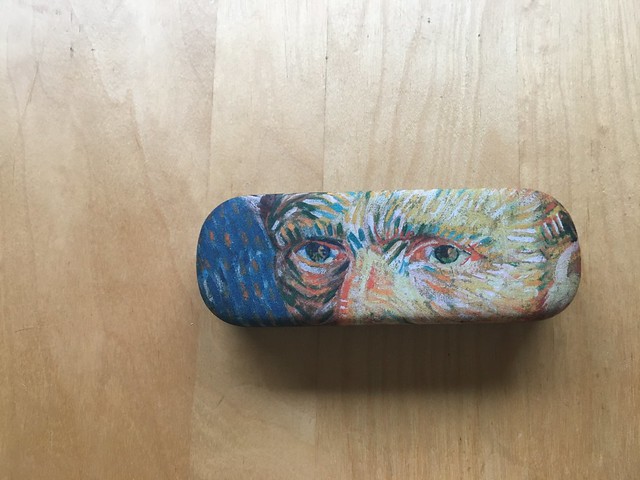 Bought an eyeglasses case from the gift shop. 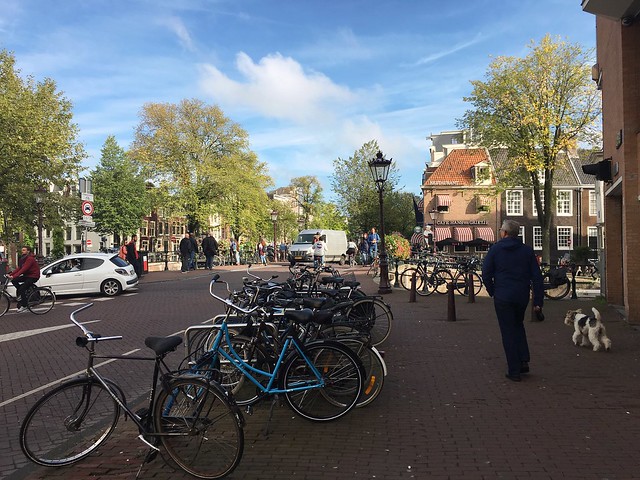 After that I headed northeast towards the Verzetsmuseum (Dutch Resistance Museum). 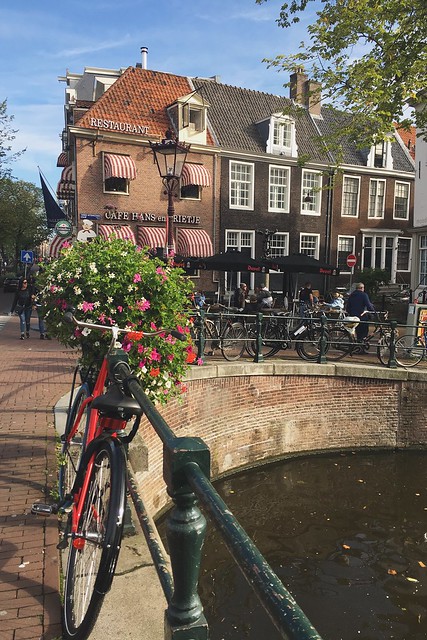 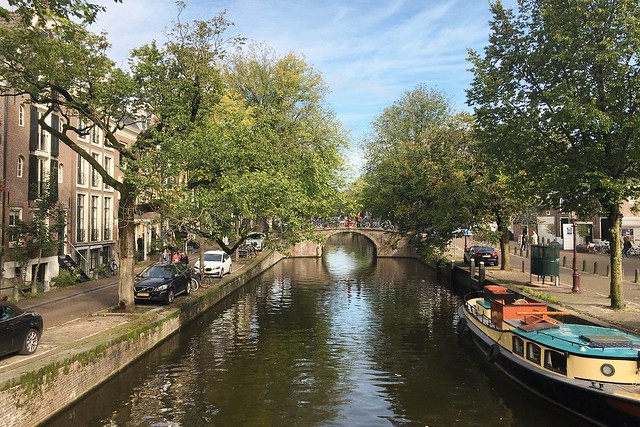 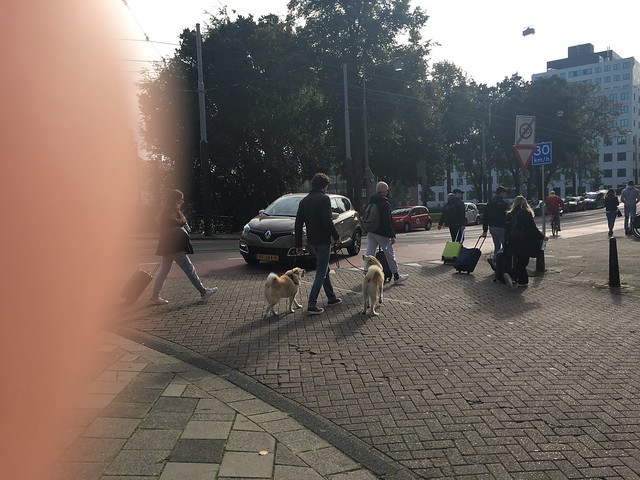 Above: 2 angry shibes! I was so excited to see them that my hand partially obcured the camera. Below: one friendly cat. 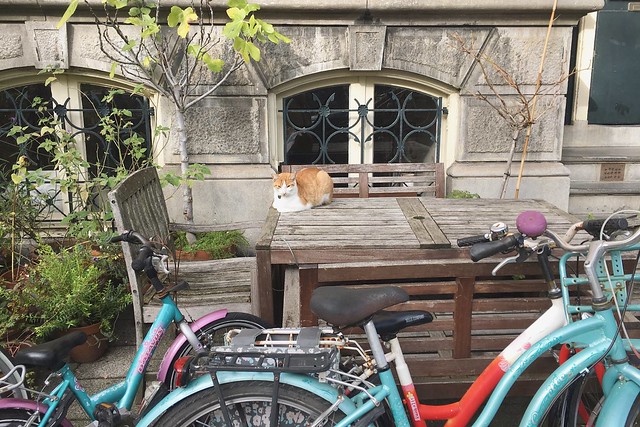 The Dutch Resistance Museum was pretty small and not super crowded, so it took less than an hour to go through the exhibits. Civilian resistance is often not a prominent part of the WWII story, so I was glad to see it memorialized here. For the Dutch people, resistance didn’t necessarily entail fighting in the war; it also meant listening to the BBC (radio was forbidden), going into hiding when they got called up for forced manual labor in Germany, hiding others, going on strike, and printing illegal newspapers. Below, an exhibit shows hand-drawn chess pieces and playing cards that political prisoners passed around their jail cells. 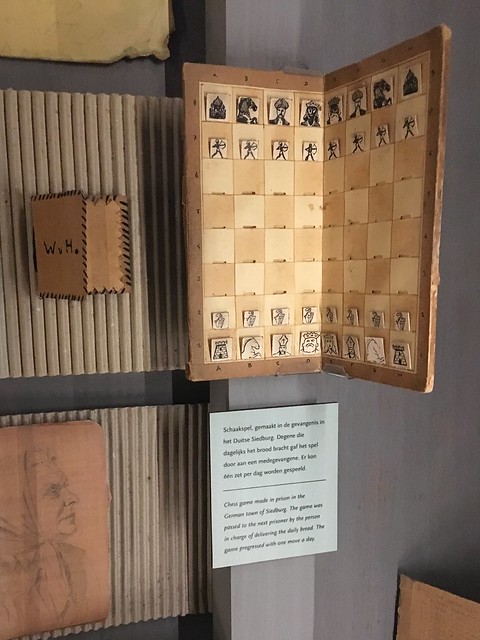 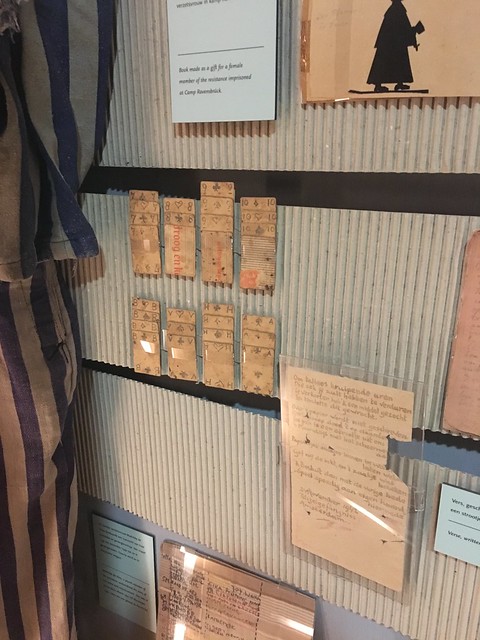 I found the recycling infrastructure in Amsterdam to be rather poor. I bought a glass bottle of elderberry juice at a market and walked around for ages trying to find a place to recycle it, but the only recycling that was available was for plastic. Same at the airport: plastic had its own bin, whereas aluminum was in the same category as regular rubbish, even though aluminum is supposed to be one of the easier and more cost-friendly materials to recycle.

There was a good amount of debris in Amsterdam’s canals, like floating plastic bags and bottles. When I went on a boat tour, we actually passed by a group of singing and chanting teenagers in a boat actively collecting plastic waste from the water. (Their organization was called Plastic Whale. Teenagers are amazing!)

And then, of course, the Dutch were very, very into biking. At times there were more bikes on the road than cars.

This trip definitely reinforced my sense of ‘flight shame’. Did I really need to take a plane just to fly for an hour and 20 minutes? I decided at the end of the trip that I will no longer fly to any destinations that I can reach in under 6 hours by train, even if the train tickets cost more. I’ve just booked train tickets to Brussels via Lyon for next month, which will theoretically take just under 6 hours each way, so am looking forward to seeing how that will work out. 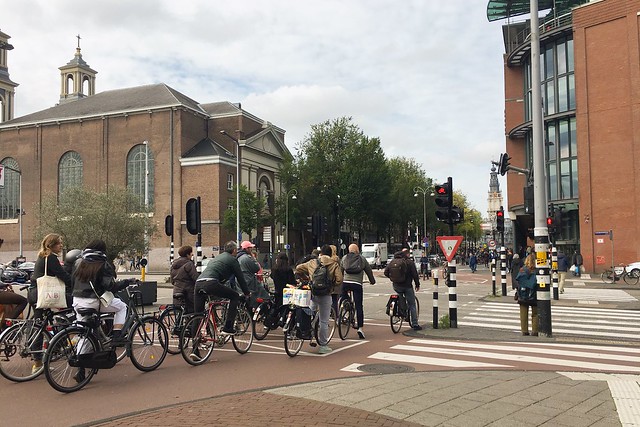 The Dutch really are maniacal about their bikes. Reminded me of my childhood growing up in Beijing. 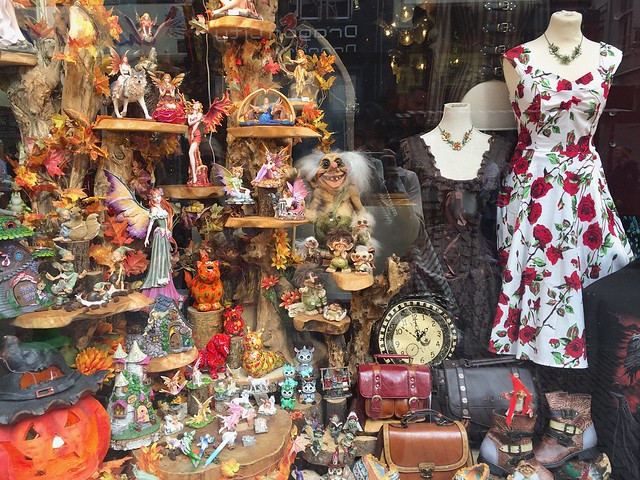 I walked west to the Jordaan district to join a small boat tour of Amsterdam’s canals. We lucked out because it was literally the only day out of the entire week that didn’t rain. The guide/skipper told us about how he lives on a houseboat with his wife and their baby and three cats. Also, apparently houseboats are not really boats, but just concrete houses that are built on the river. You cannot take them when you move. 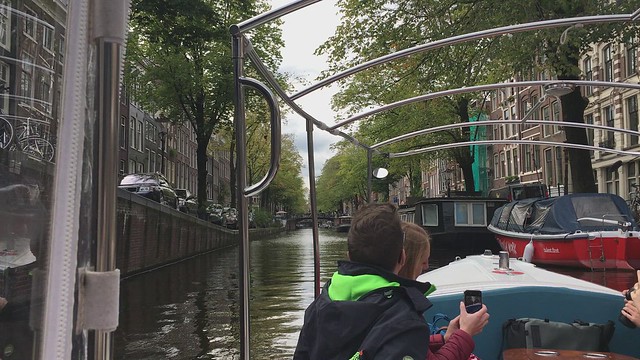 Afterwards, I had a quick bite at a nearby market. 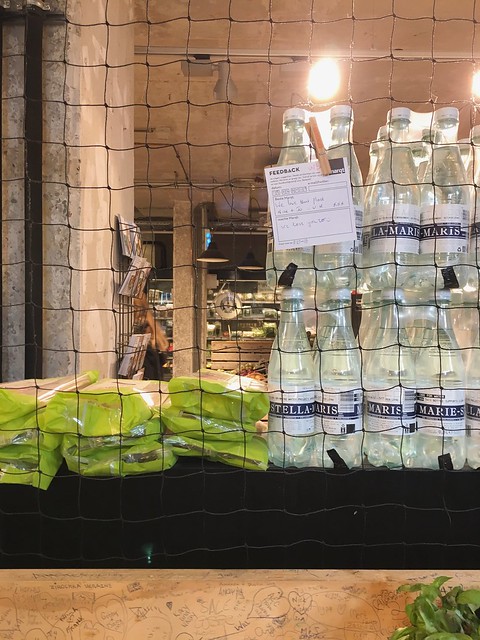 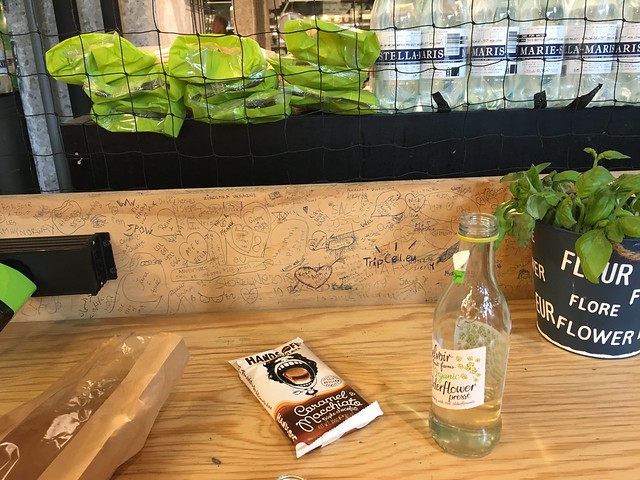 It was a quick bite because I had to meet with a local photographer to do a personal portrait session. It had been five years since I’d last had professional headshots taken, and I loved the idea of getting some pictures of me with the canals of Amsterdam! We walked to the nearby Bloemenmarkt so that I could buy a bouquet to hold. Honestly, it’s a huge tourist trap. Literally every vendor was selling fake tulips made out of plastic and fabric. There was only one vendor who was selling real flowers. We picked out daisies and these pink flowers which I do not know the name for. It was 8 Euros for the whole bouquet — not bad! 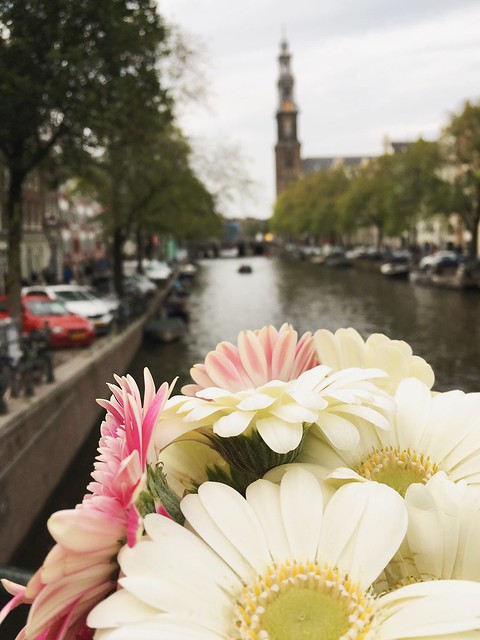 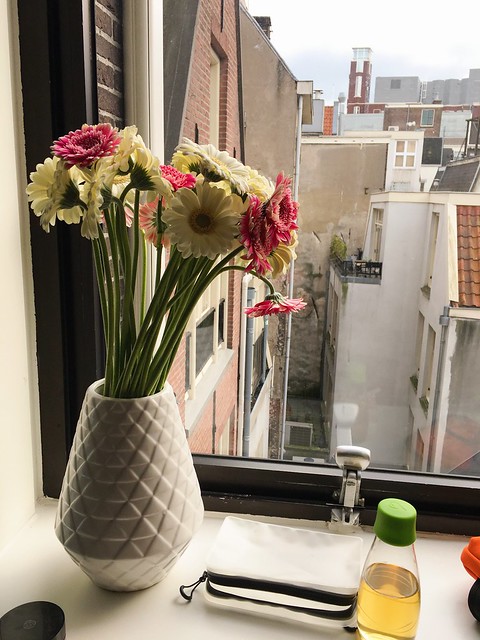 Later that night was the main event — the primary reason I had come to Amsterdam. To visit Anne Frank’s house. I had tickets for 7pm, and there was already a huge line when I arrived. The staff did the best they could, staggering people in groups of five or so, but it was still massively crowded and congested inside. 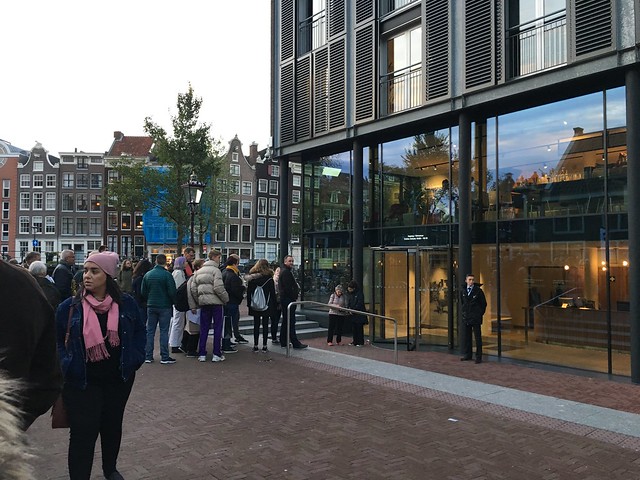 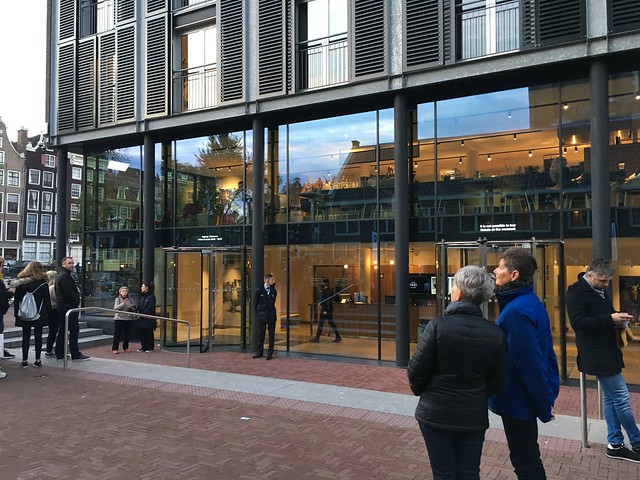 Once inside the Secret Annex, we were part of a slow-moving line that shuffled from one room to the next, as a lot of people were very focused on reading each and every piece of the exhibit signage.

There was no furniture in the Annex. The Nazis had raided and stolen the furniture after the residents were taken away, and Otto Frank decided to keep the rooms in their bare state when he opened the museum. So it was a huge shock when I entered a nondescript room, saw a couple of vintage photos of movie stars pasted to the walls, and it only clicked after a few seconds… This was Anne Frank’s room. This was the room where she and Fritz Pfeffer slept every night for more than two years. I had first read Anne’s diary when I was roughly the same age that she had been, and it suddenly felt even more real.

(Although seeing the actual house didn’t answer a burning question that I have harbored for a long time: why did Anne have to share a room with Fritz, a middle-aged man? Why did Peter get to have his own room under the stairs, when he should have been the one who shared with Fritz? I remain deeply confused and Google yielded no helpful results!!!)

(Update: I emailed the museum about this and they sent back a prompt but vague and confusing explanation. I combed through it a couple times, and I think the rationale is that the van Pels family lived on the top floor, whereas the Franks lived one floor below them. If Peter had roomed with Fritz, then Anne would have had to live under the stairs right next to Peter’s parents with little to no privacy for either party. Additionally, the Franks were the common link between the van Pelses and Fritz, who had never met each other prior to moving in to the Annex, so it made more sense for Fritz to share a room with a Frank, a known quantity.) 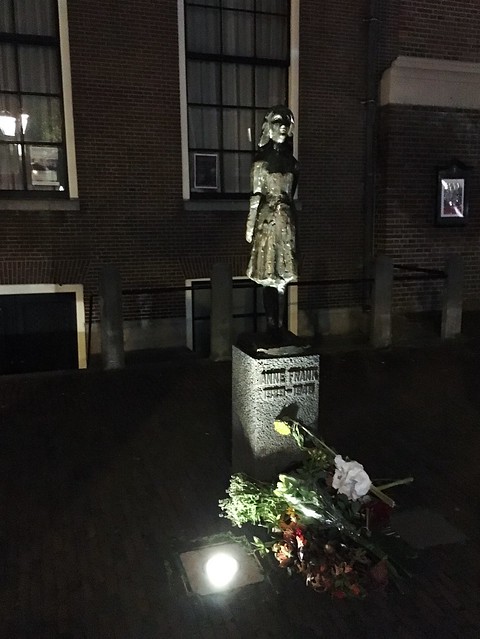 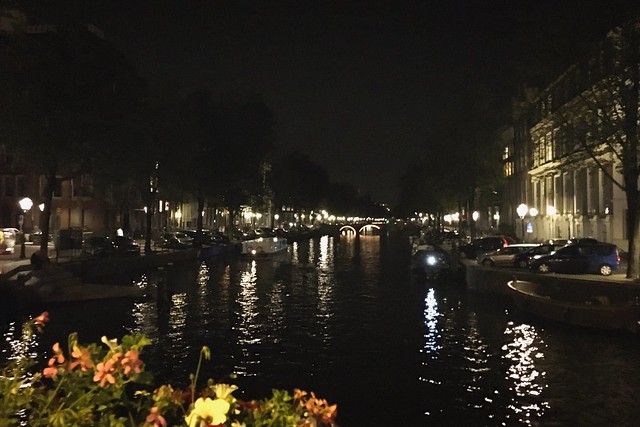 Later, walking back in the luminous nighttime. It had been a long and productive day. 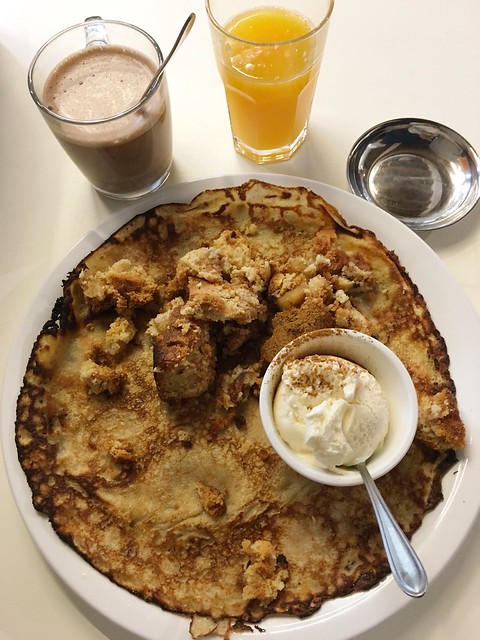 The next morning I got up early and had breakfast at a place called Pancakes, just across the street from the train station. I ordered the apple crumble pancake and was amused to find that Dutch pancakes are remarkably similar to the Chinese ones my mom makes, except with a spongier texture. 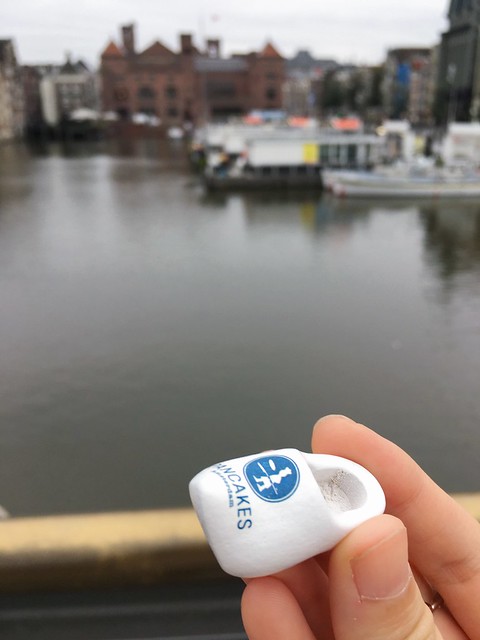 As a souvenir, the cafe gave me a klomp (Dutch wooden clog) on a keychain as I was paying the bill.