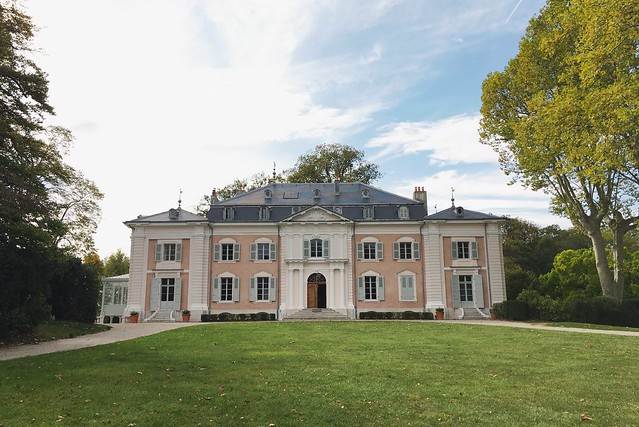 This weekend I had to go to Ferney-Voltaire, a sleepy little French town just across the border from Geneva, to send a package. I had, of course, heard of Ferney-Voltaire before; being only half an hour by bus from Geneva’s Gare Cornavin, it’s a popular place to live for UN employees and folks who are starting young families. However, it wasn’t until this week, while looking up transit directions for this trip, that I found out that the name Ferney-Voltaire isn’t just a coincidence; the village is, in fact, named after that Voltaire. As in, the writer Voltaire who lived here for twenty years and built a sweet chateau for himself while he was at it.

To get to Ferney-Voltaire, I had to take the F bus to cross into France. I was surprised to learn that the same bus stops at Palais des Nations, aka the UN’s headquarters in Geneva (UNOG). I had never seen UNOG in person before, but from the bus it looked smaller than expected. 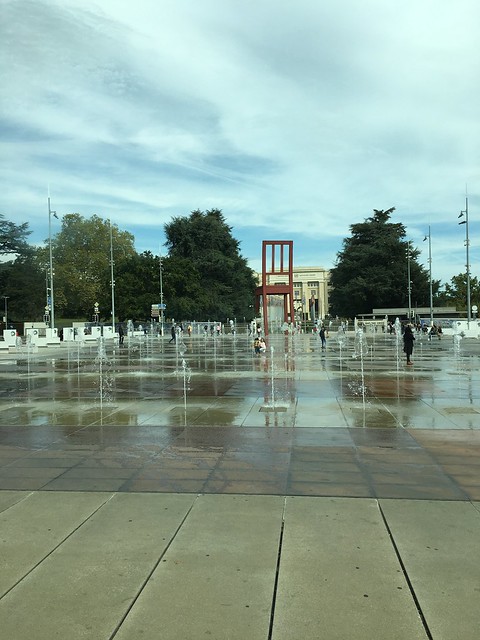 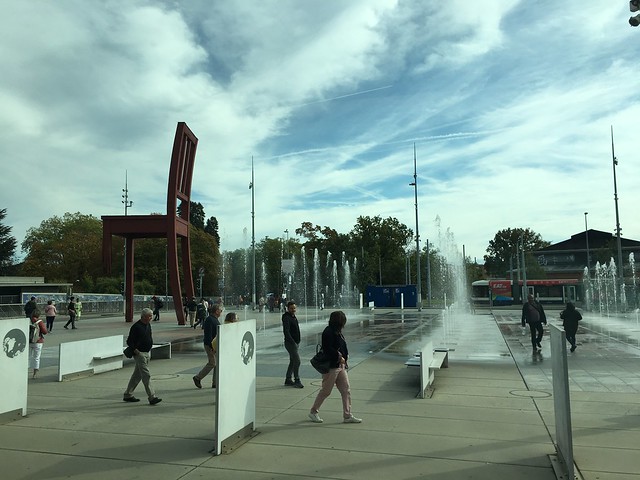 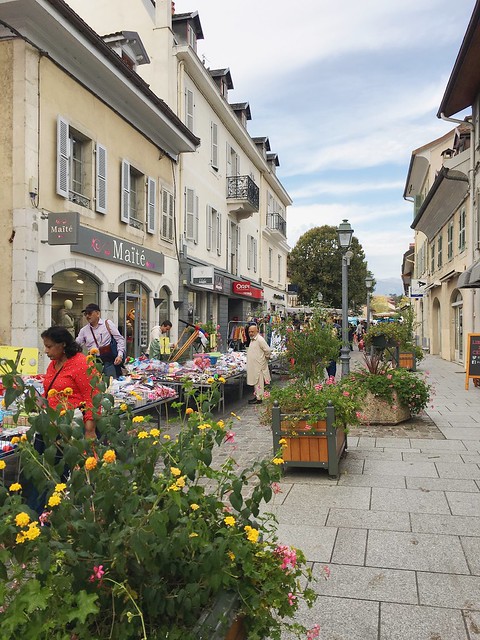 I got into Ferney just as its Saturday street market was closing up shop. The village was noticeably more diverse than Geneva. There seemed to be a large African population, and several of the street vendors were selling hijabs and other headscarves.

After sending the package, I decided to walk to the chateau, which is only 12 minutes away from town center. 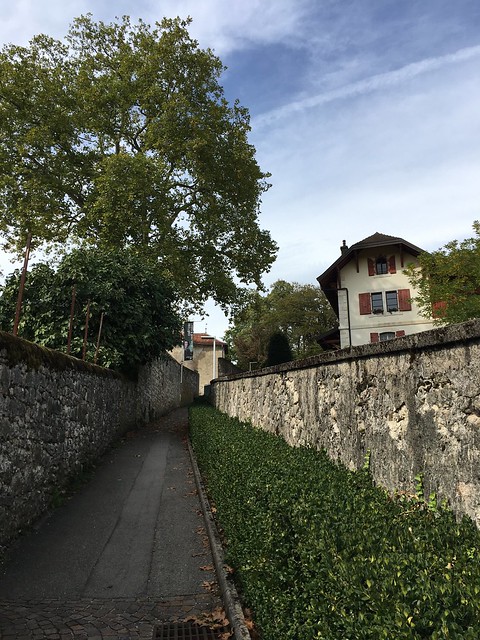 Voltaire lived here for twenty years, up until his death in 1778. With its generous size and lavish decor, the chateau became a sort of country club for his intellectual pals. Funnily enough, the day I visited, there was a little party in the courtyard hosted by an electric car company (??). 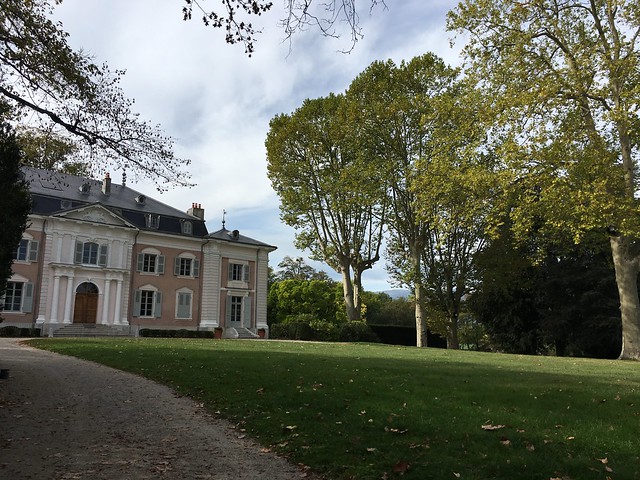 I got in for free even though I am above the age cutoff for most discounts in Europe (26) and told the information desk as such. Not sure whether they have a different policy. 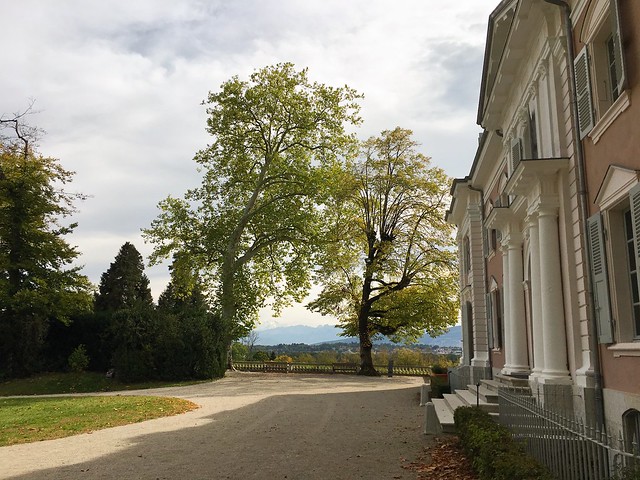 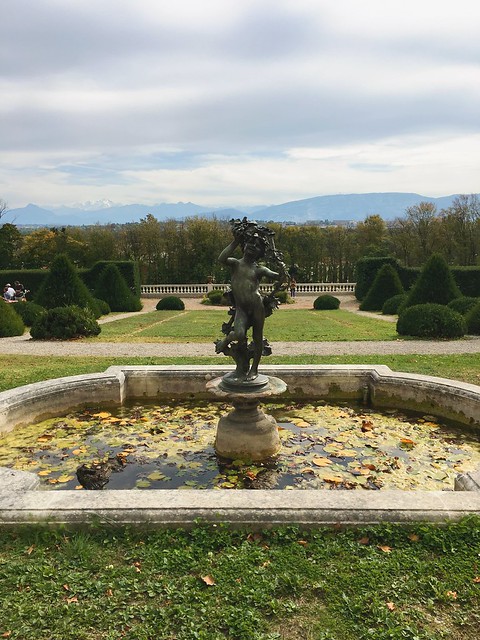 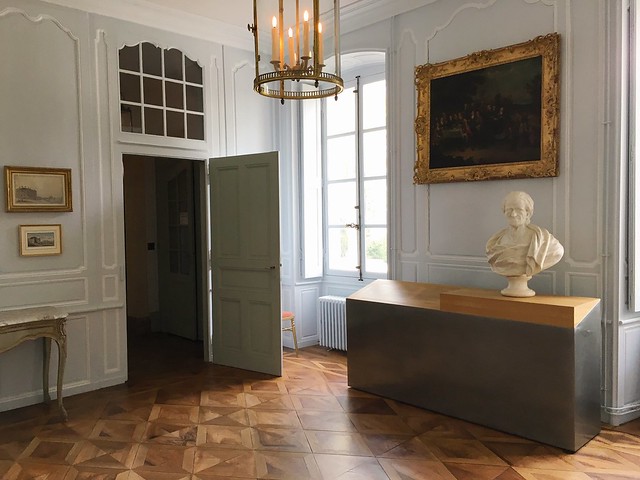 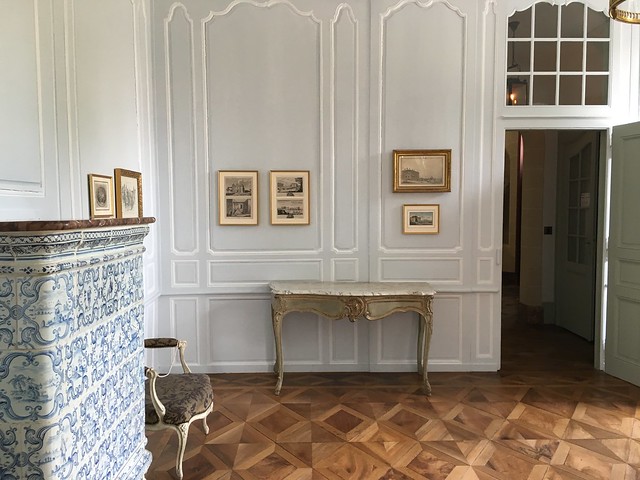 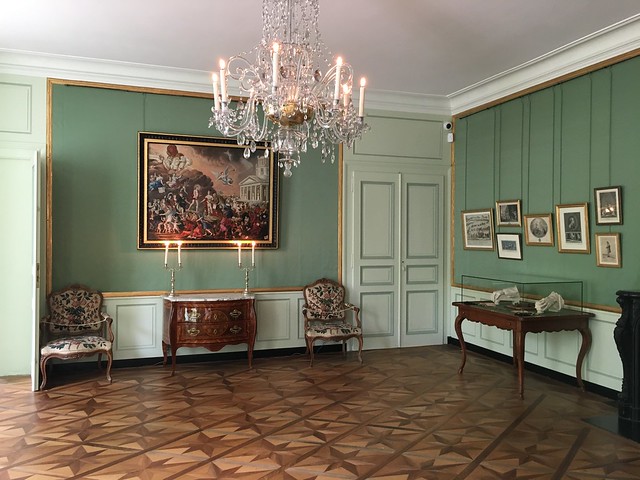 One of many sitting rooms. 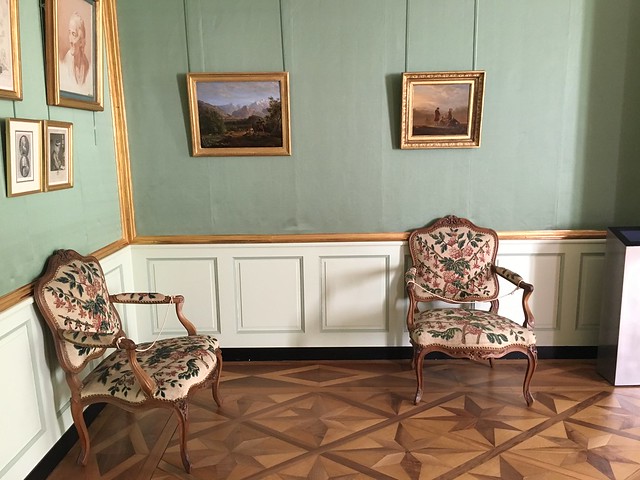 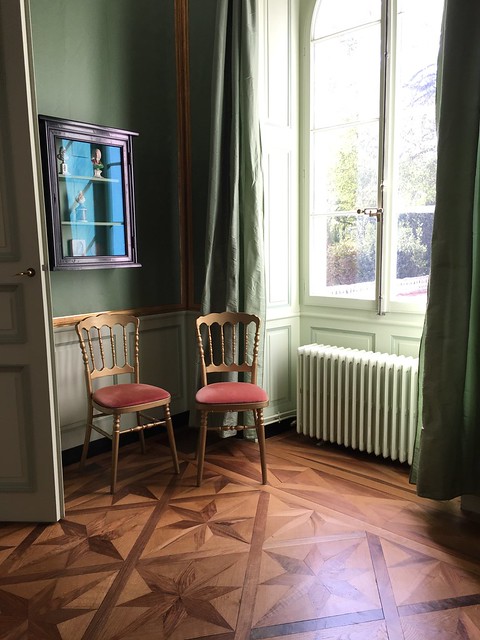 I liked how the chairs for security/staff totally fit with the vibe.

And then this room was just eye-popping. Definitely up there with Versailles. 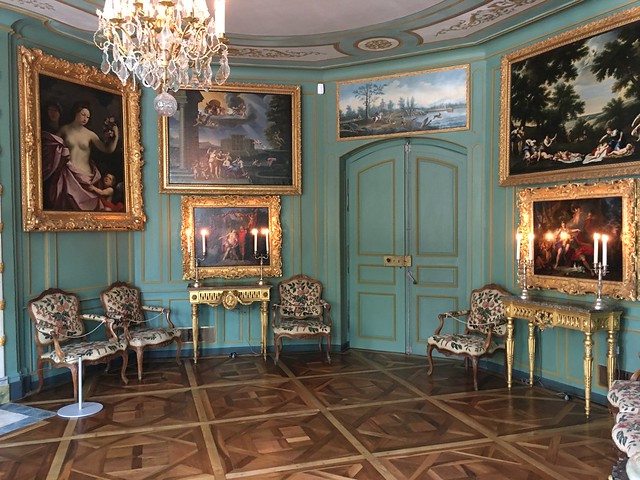 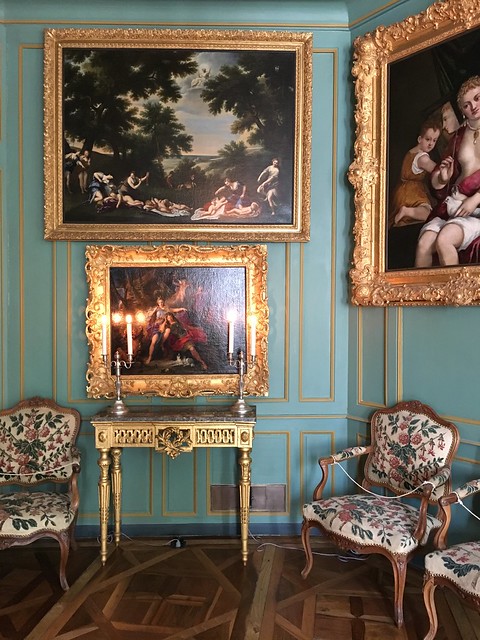 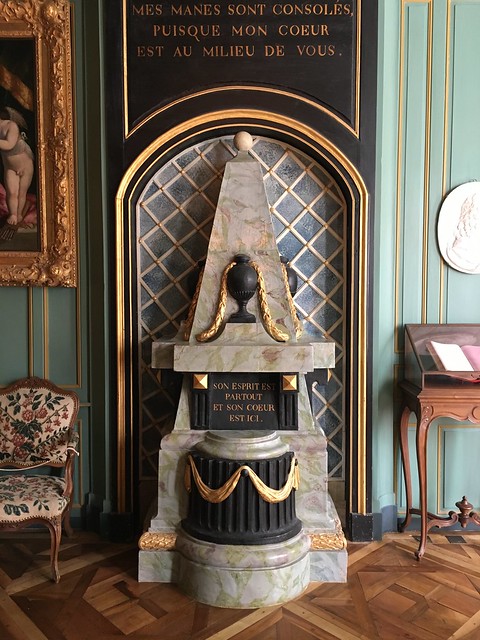 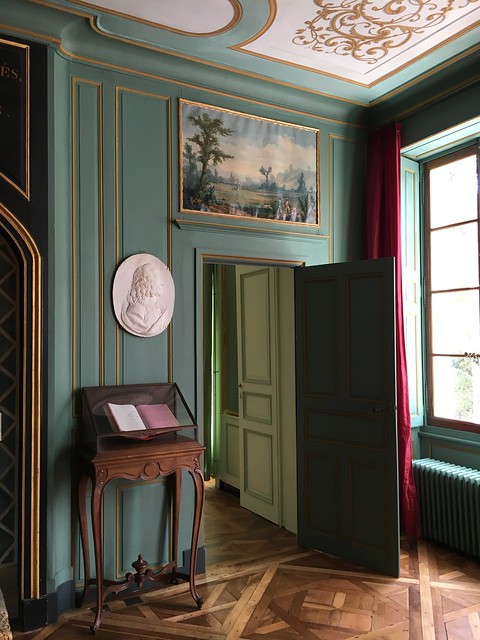 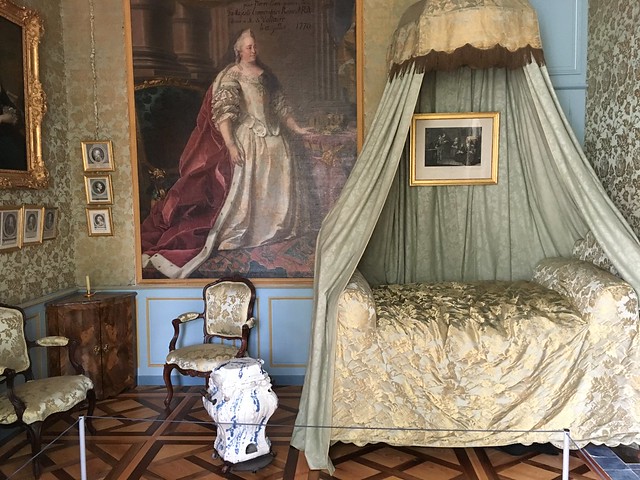 This was not actually Voltaire’s bedroom, but they set up a restored version (or replica – the signage wasn’t super clear) of his bed in this downstairs room. 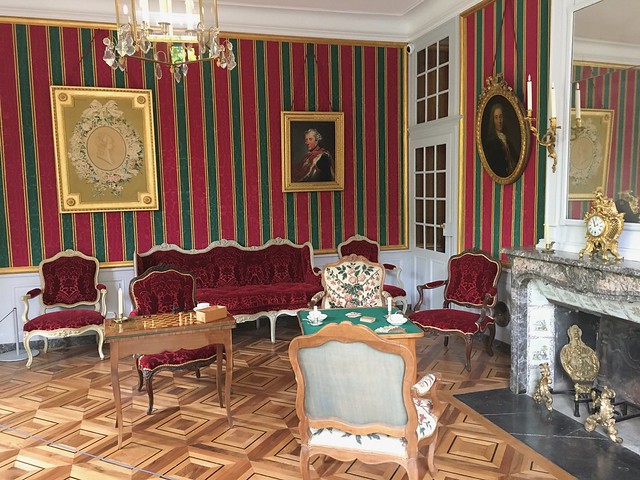 And then this was a more casual room for playing cards and chess and such. 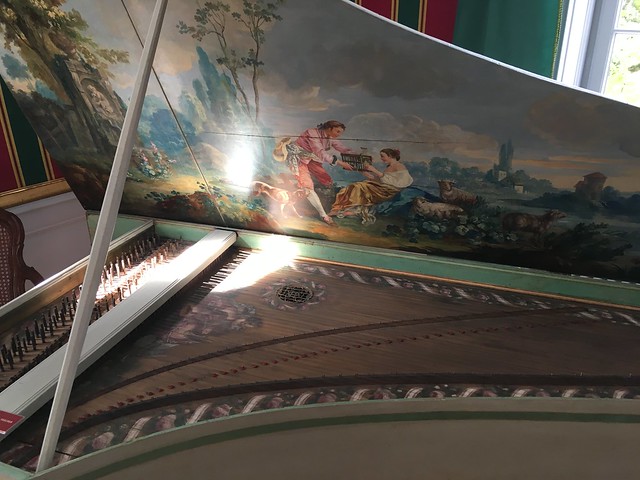 There was also a beautifully painted piano. 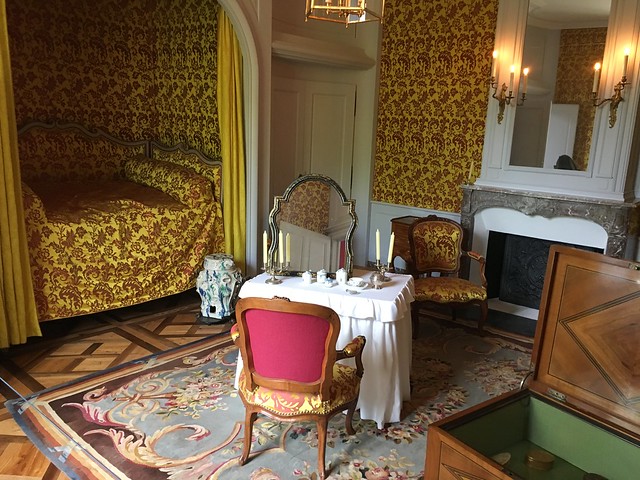 This was the bedroom of Voltaire’s niece and also love interest (?????), Madame Denis. The signage had a little spiel about how she ran the chateau like clockwork and made sure everything looked perfect. But still, this guy hooked up with his niece??? What????? 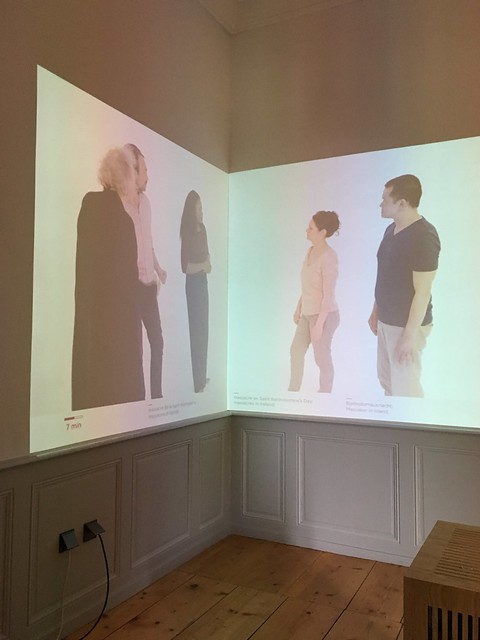 There was also a room with a 12-minute video of actors just reciting Voltaire’s most famous words to each other. This had the potential to be extremely cheesy, but I have to say, they were really good and actually sold it. The Asian guy on the far right communicated his lines in sign language, which was pretty cool. 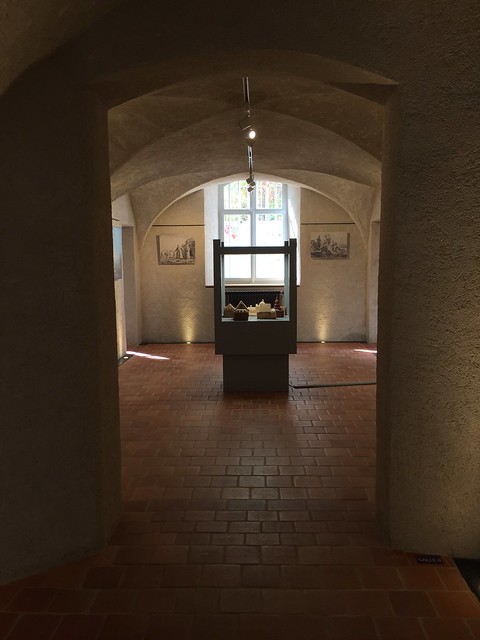 The last stop in the house was the basement, which just had a bunch of random assortments of paintings, sketches, and papers. 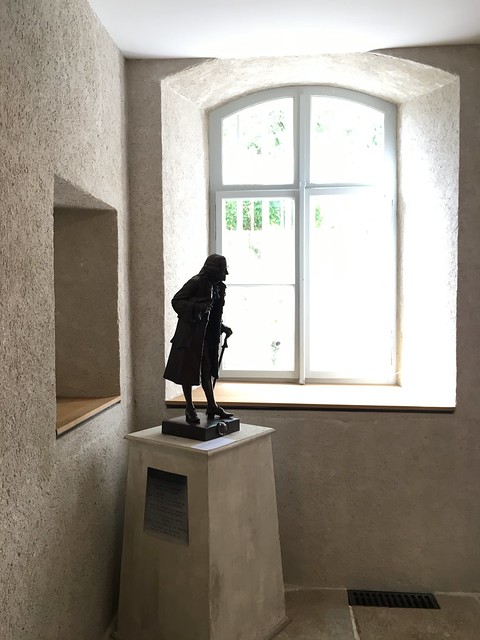 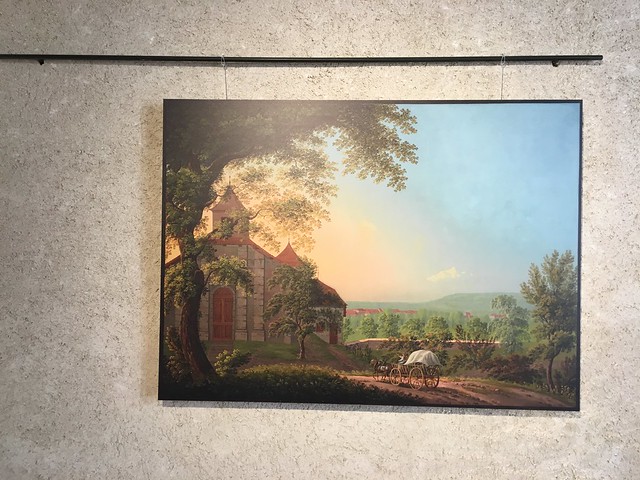 The grounds outside the chateau were also a delight. I particularly liked this tunnel of trees and could easily imagine Voltaire taking a walk down this path every day for inspiration. The picture really doesn’t capture how warm and whimsical it felt. 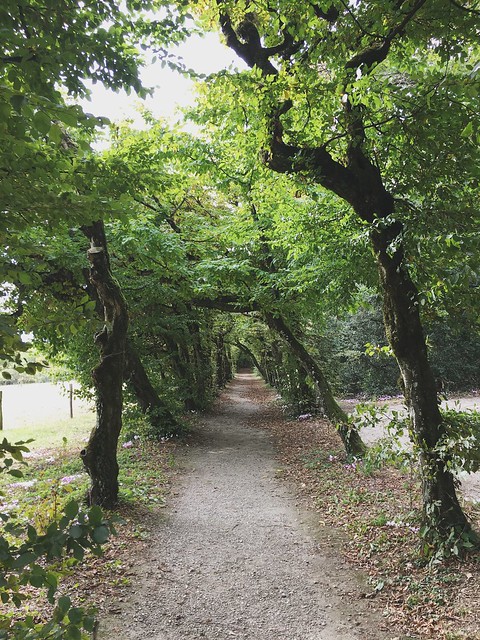 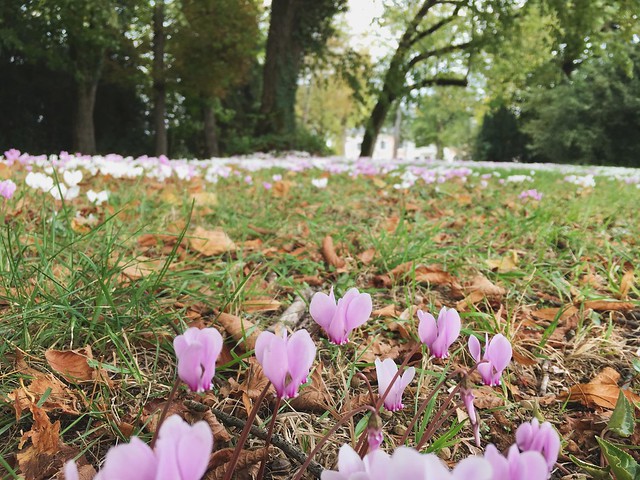 Afterwards I stopped at a nearby Carrefour to buy some wine. I picked out this random bottle of Bordeaux wine for about 12.50 EUR and also got a bottle of petillant de pomme, or sparkling apple cider. (The taste was exactly the same as Martinelli’s!) 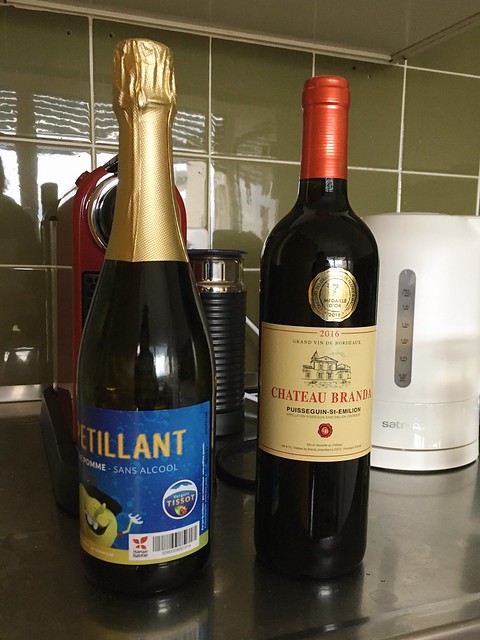