That time Istanbul Airport thought I had the coronavirus

Update March 30, 2020: Since writing this blog post a month and a half ago, it has become clear to me that it’s entirely possible that I could indeed have contracted the coronavirus. I did not have the opportunity to be tested then, so I’ll never know. I’ve left this post up as a first-hand account of what the general mindset was like in mid-February, before we knew that COVID-19 would explode into a global pandemic. 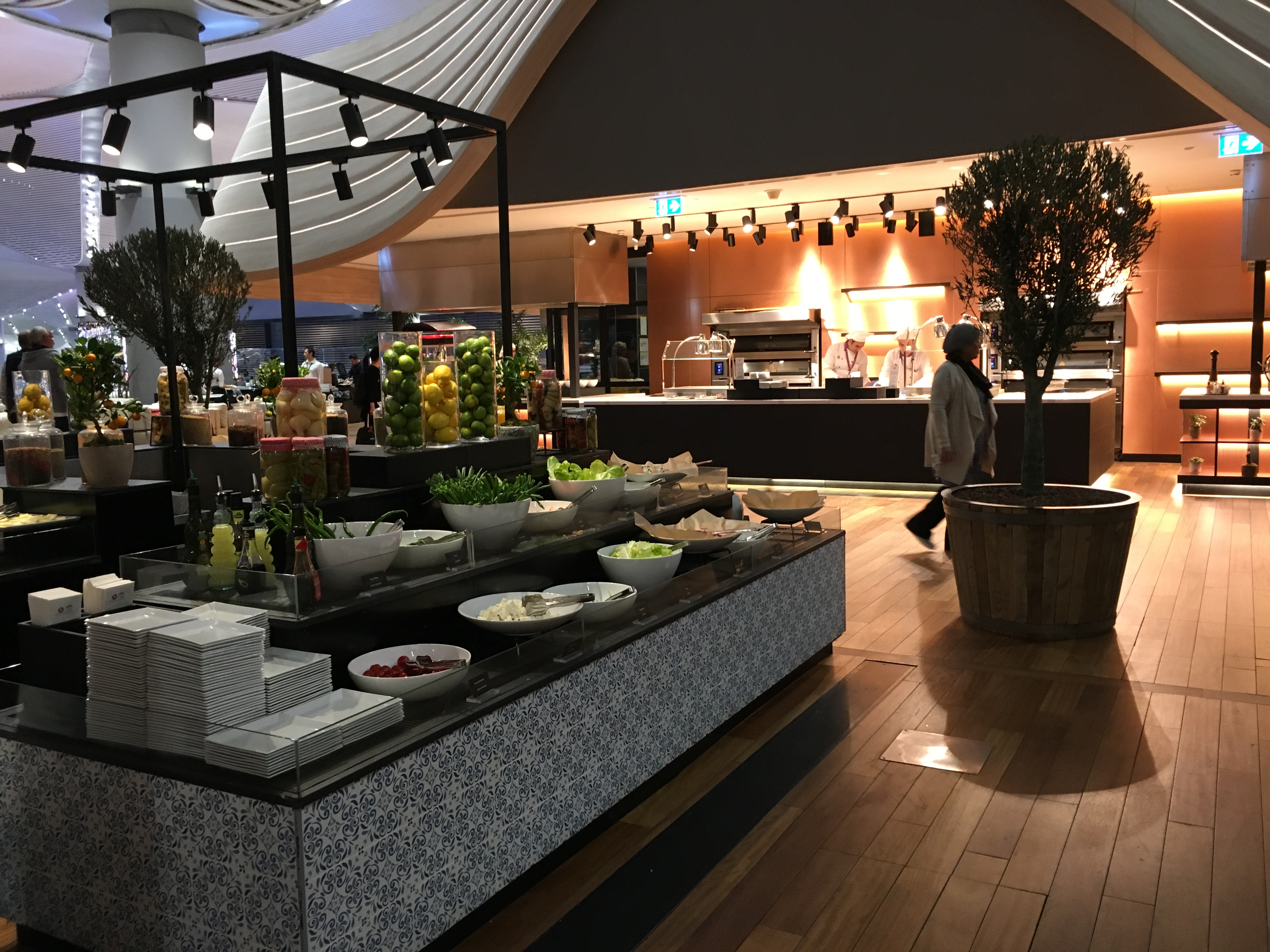 I just spent a week in Indonesia for work and began experiencing flu symptoms during my last two days there. Which is not surprising: Indonesia has no officially confirmed cases of the coronavirus, but it’s peak flu season and I spent the week traversing three cities and having in-depth conversations with at least thirty people. The domestic flights within Indonesia were basically symphonies of coughing. It’s a miracle I held on until the very end.

By the time I landed in Istanbul for my return journey, I was feeling absolutely awful. I’d hoped to use the layover to take a free tour of Istanbul, but all I wanted to do now was to lie down and sleep. I asked the employees at the Turkish Airlines business lounge if I could have a private sleeping room. Nope, because the cutoff for getting a private room was up to 9 hours in layover time, and my layover was 9 hours and 45 minutes. I asked if there was a pharmacy. Nope, it was outside immigration and also wouldn’t be open for another two hours. I tried to explain that I was ill. All I got were blank faces and shrugs.

Frustrated, I went to my locker to get my phone charger while I figured out what to do. This is where I basically lost control. I had been feeling a sharp pain in my right ear since the flight, as if somebody had been stabbing into its depths with a pencil. The next thing I knew, there was an extremely intense dizziness, in which it almost felt as though I had left my body and was looking at myself from another angle. I dropped to my knees, and then, because I was also experiencing severe back pain, curled up on the floor next to my locker.

I stayed on the floor for a while. It was so much more comfortable than standing or sitting, and also I wanted to force the airline’s hand a little: I am seriously unwell and I need help.

I think I was there for a minute before I heard footsteps running towards me. Two very kind female employees helped me sit up and got me a chair and a bottle of water. They rubbed my shoulders and asked if I needed a doctor. No, I said. I just need to lie down.

I was put into a sleeping room right away. 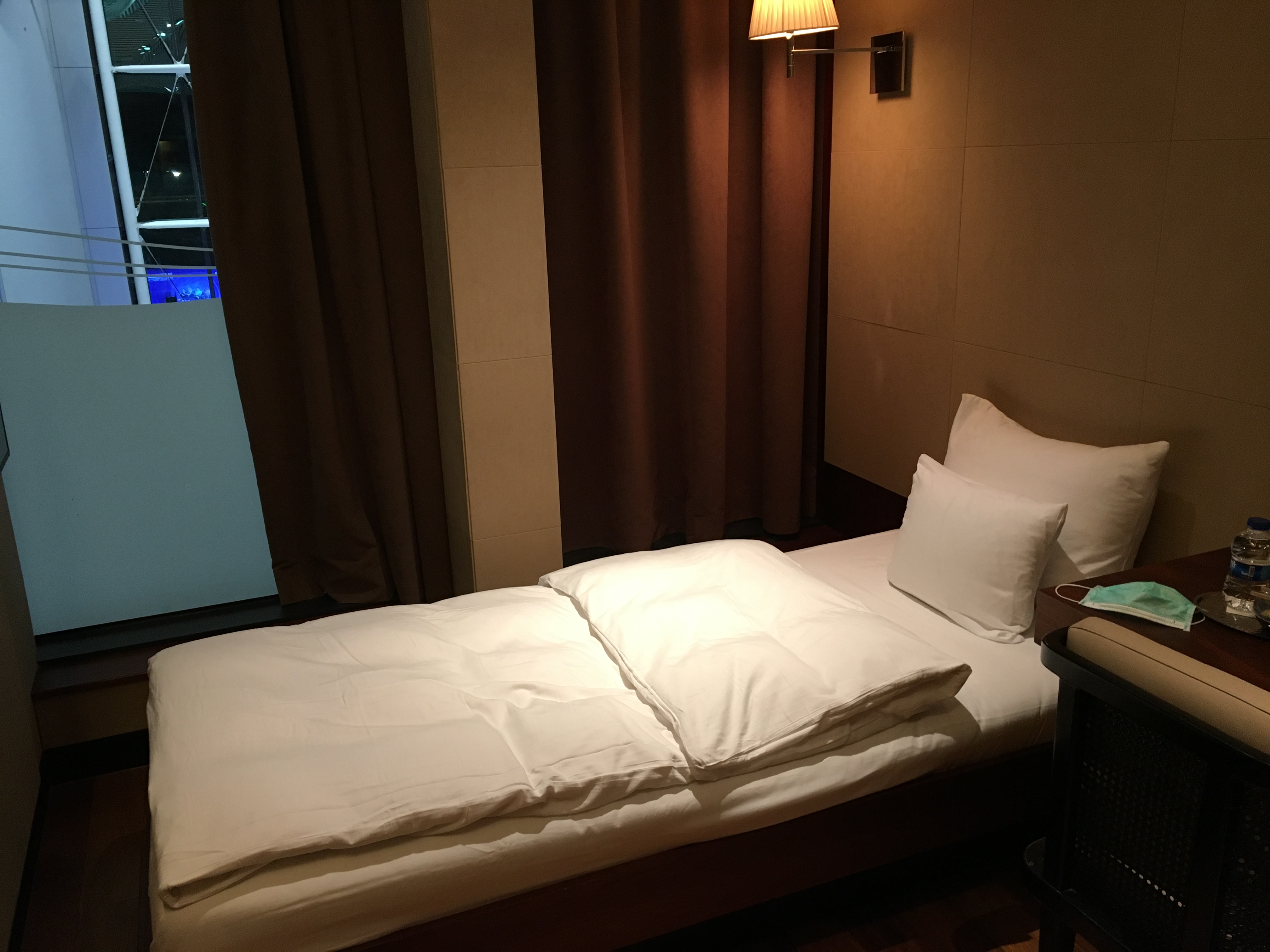 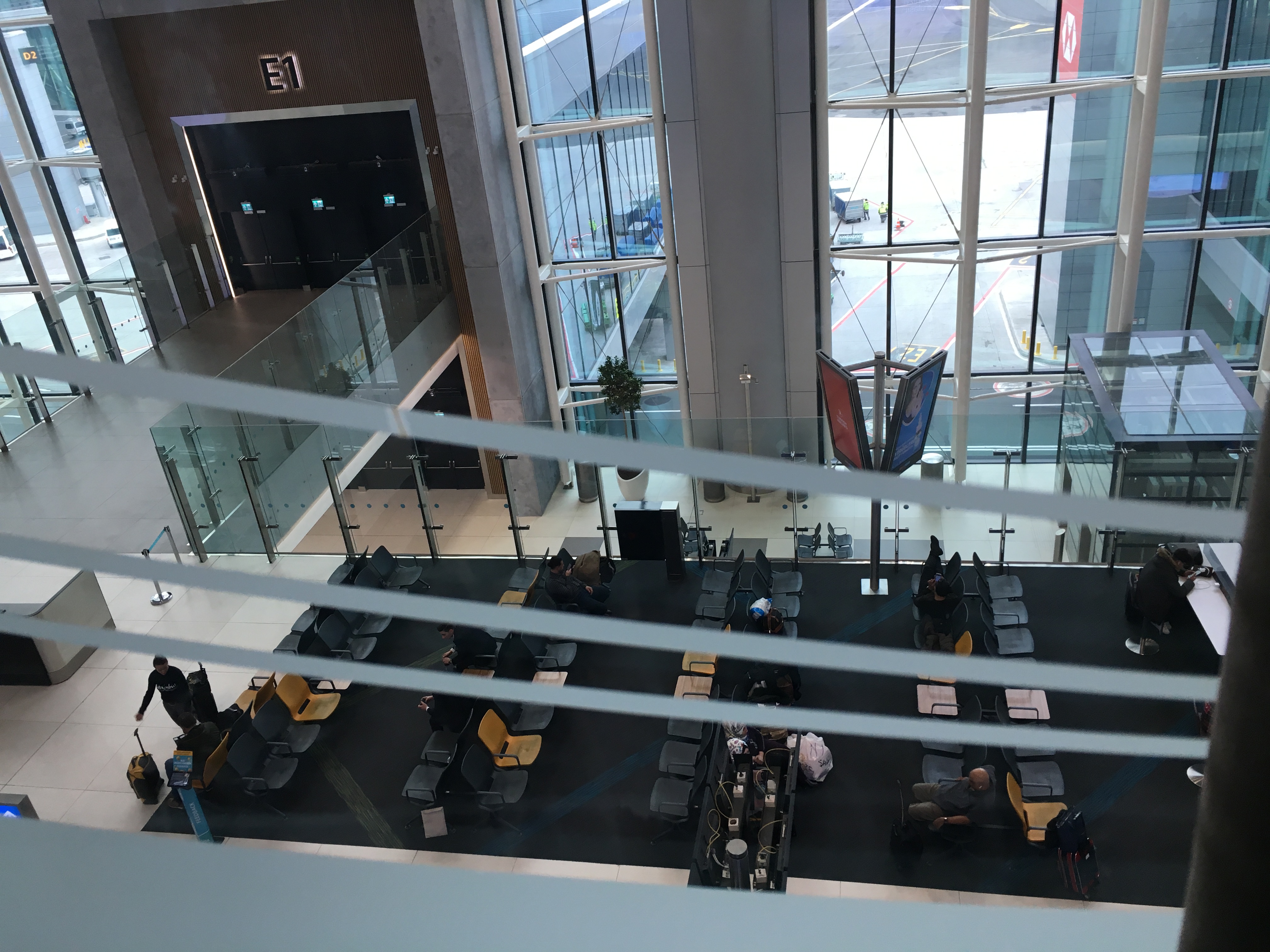 It came with a nice view of the airport. The bathroom was across the hall with a shower and fancy bathrobes.

I had been in the room for less than 15 minutes when a knock came. I opened the door and was alarmed to find six people outside — two of them medical workers wearing masks. (At least they weren’t in hazmat suits.) They had figured out that I had flown from Indonesia, and also let’s face it, I’m Asian, pretty sure there was some stereotyping going on. “We just need to be very careful,” they told me.

They took my temperature, my blood pressure, and also pricked my finger for a blood test. Then the doctor showed up, also wearing a mask. He looked at my throat and listened to my heart while the crowd outside the door watched intensely, almost with a morbid curiosity.

Finally came the anti-climactic conclusion: “You have some viral infections.” And then: “Do you want an intravenous injection?”

I requested instead ibuprofen and cough drops.

One of the employees sternly informed me that I needed to pay for the doctor’s visit (“Dollars or euros?”). It turned out to be around USD 80. Update: my employer told me that I should not have charged it to work, and they’ll be deducting the amount from my paycheck. 😂 They also brought the medication prescribed by the doctor, which was only 10 euros. 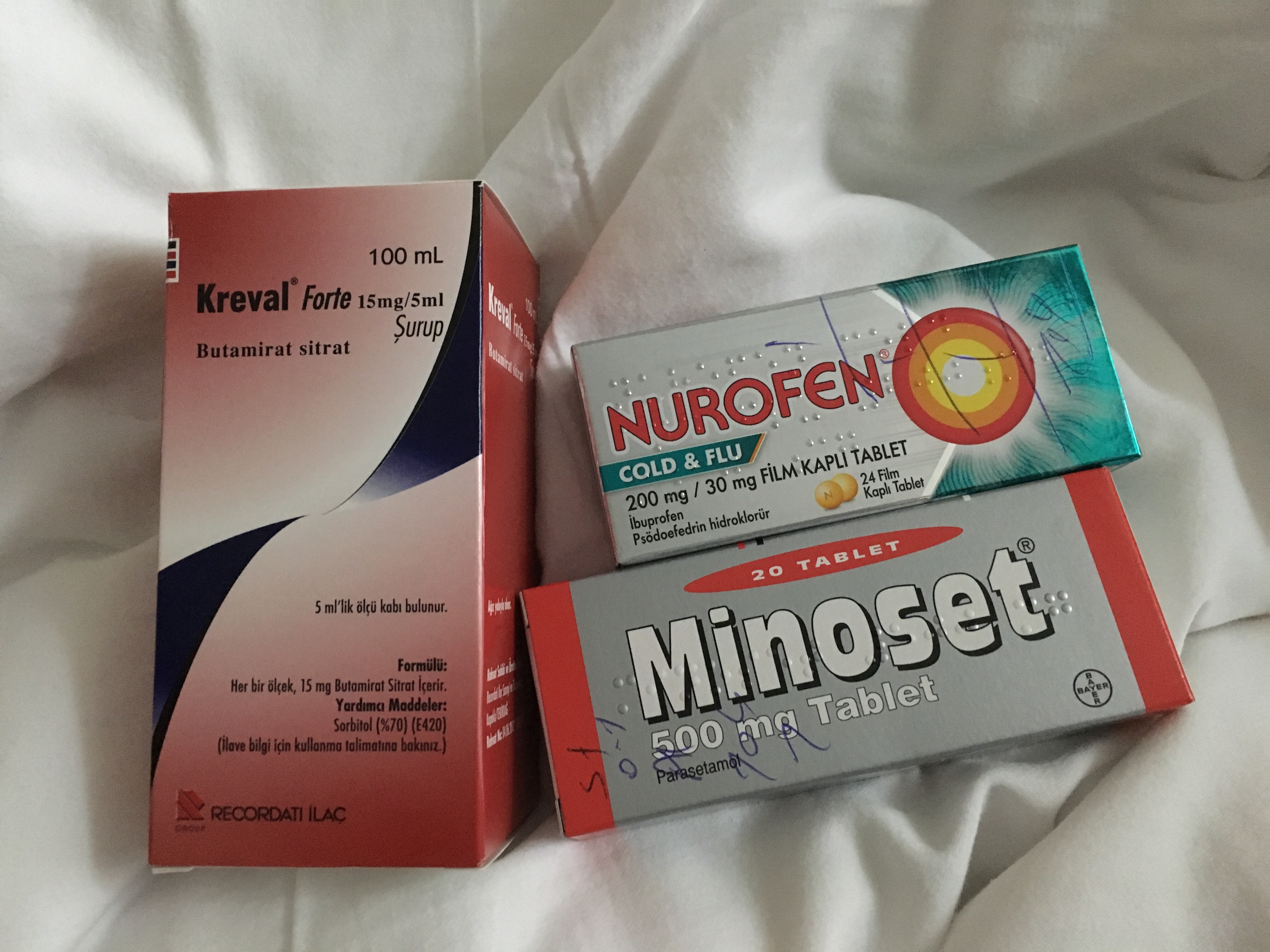 After that, they finally left me in peace. I took some ibuprofen, turned up the room temperature, got under the covers, and slept for four hours. When I woke up, I was covered in sweat and clammy as hell. But the fever was gone. I went back out into the lounge, had some pastries and a salad, and departed for my flight.

All in all, I could think of worse places to get sick in while traveling. Here are some pictures of the business lounge from when I had a layover on the way to Indonesia.

On the way back to Geneva, the kind Turkish gentleman sitting next to me noticed that I was coughing and blowing my nose like a trumpet. He gave me an FPP2 mask (the one I was wearing was a regular surgical one), a packet of tissues, and what I assume is a nasal spray. I was truly touched. 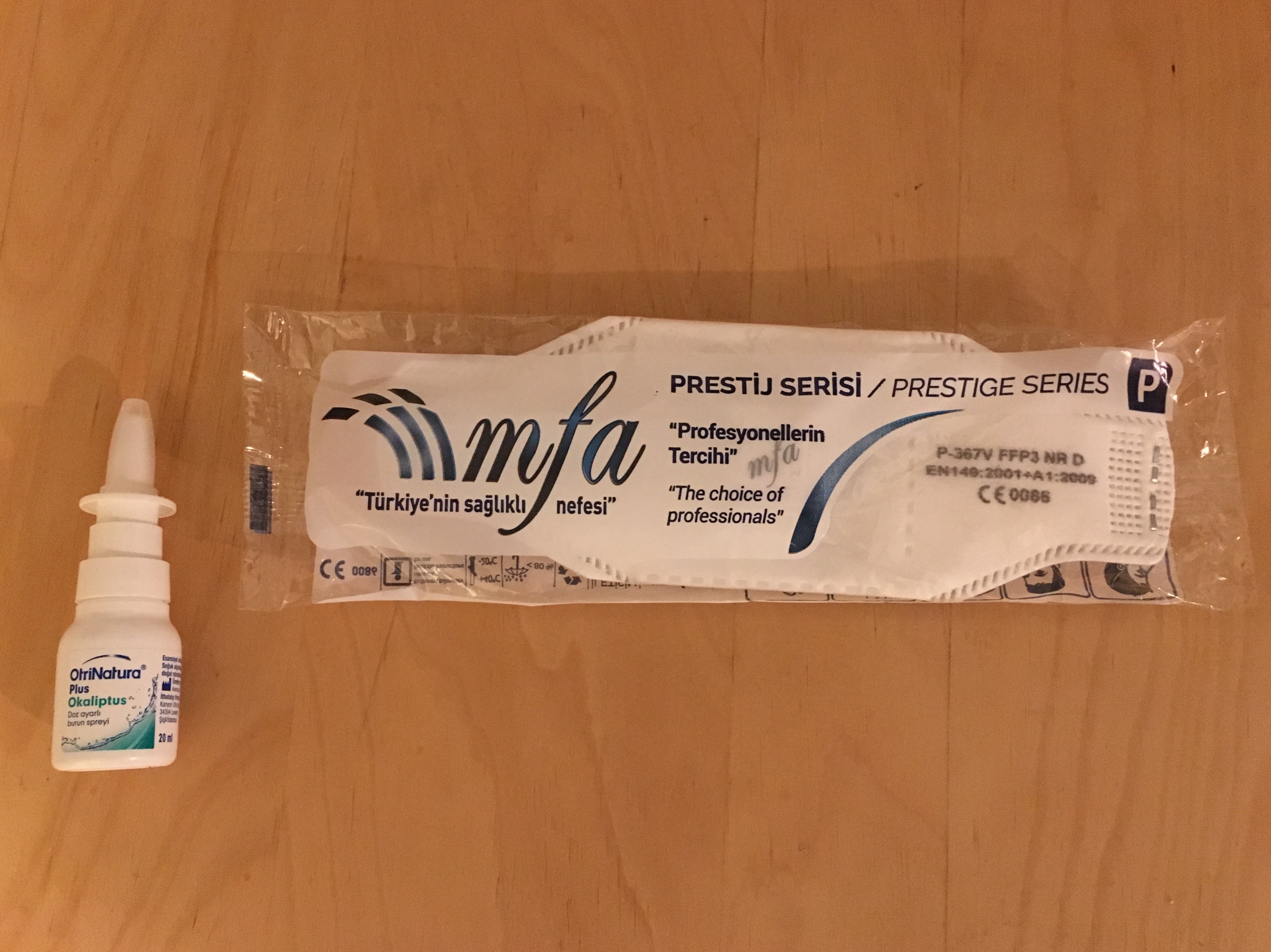 So that was travel in the time of coronavirus. When I arrived back in Switzerland, there were no temperature checks, no questions about travel history to China, and even a sign posted at immigration saying “there is no need to wear a mask”. IDK, but I feel like they’re being too cavalier about this?