Snapshots from 7 days and 3 cities in Indonesia

I recently got to visit Indonesia for the first time. For work. I wish I could talk about the project that I’m working on because it’s an exciting endeavor, but in choosing to make this blog anonymous and getting to write whatever I want (within reason), it’s better that I keep my professional life out of it. So here I’ll just share some behind-the-scenes photos and miscellaneous thoughts.

Travel in the time of coronavirus

People are kind of all over the place when it comes to the spectrum of fear/anxiety. Waiting for my flight in Geneva on February 7, I only saw two people wearing masks, both of them Asian. When I got to Istanbul for my layover, there were a few more people wearing masks, but they were by no means the majority. A large number of people, however, were noticeably sick with something; I almost jumped out of my skin every time the group of Russians behind me in the waiting area broke into hacking coughs.

When I arrived in Bali on February 8, there was a huge bottleneck right before immigration because everyone had to fill out a yellow form (“are you sick? Y/N”). You handed the form to an employee, who gave you a different yellow form in exchange. They were supposed to ask for the form back upon your exit from Indonesia, but by then I had misplaced my form, and the officer didn’t ask about it.

By then an entry ban had been issued against Chinese nationals, so I was the only Asian traveler among a sea of young white backpackers. The immigration officer scrutinized every page of my passport. “When was the last time you were in China?” he asked. December 26, I said. That was good enough. I was allowed through without a temperature check or any further questions.

Throughout the week, I took four domestic flights: from Denpasar to Surabaya, from Surabaya to Jakarta, and then a roundtrip from Jakarta to Denpasar and back. Even though people on the streets weren’t wearing masks (“If we drink enough medicine in advance to prepare our bodies, then we won’t get sick,” someone told me), on each of the flights I started to see more and more masks.

I ended up getting a viral infection and had to eventually seek medical help at Istanbul airport on my way back. I was still pretty sick when I got back to Switzerland and worried briefly that I wouldn’t be allowed in, or that I’d be put into quarantine. But the Swiss seemed even more lackadaisical: at immigration, there was literally a sign saying there was no need to wear a mask. I tucked mine under my chin and was let through with no questions whatsoever.

I found Indonesian hotels to be high-quality and affordable. I stayed at four different places in three different cities: Denpasar (the capital of Bali), Surabaya (the second largest city in Indonesia), and Jakarta (the national capital). 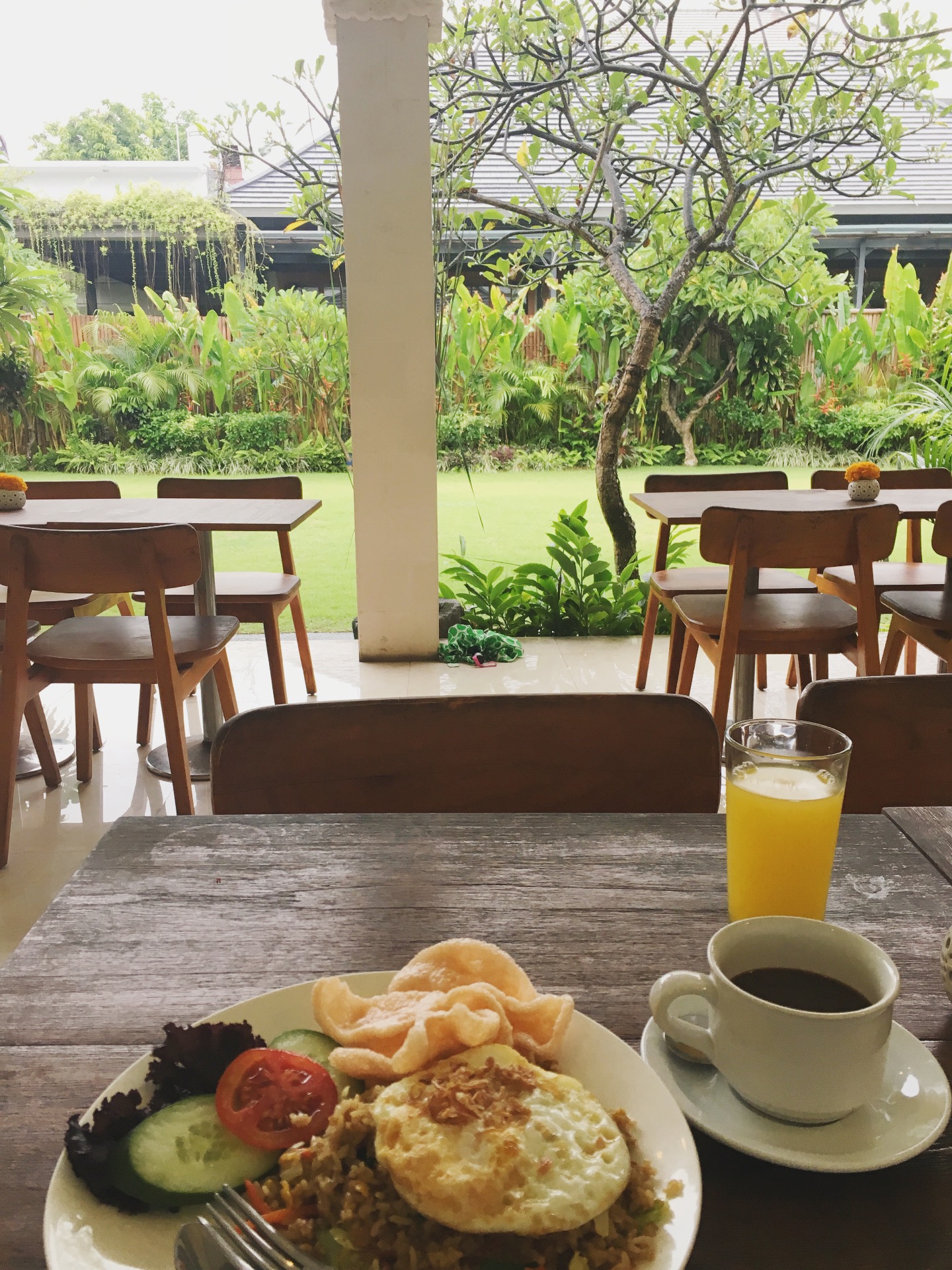 This was the place I stayed at in Denpasar. Nice little balcony overlooking a pool, though we had thunderstorms most of the time. I enjoyed the traditional Indonesian breakfast cooked for you on the spot. 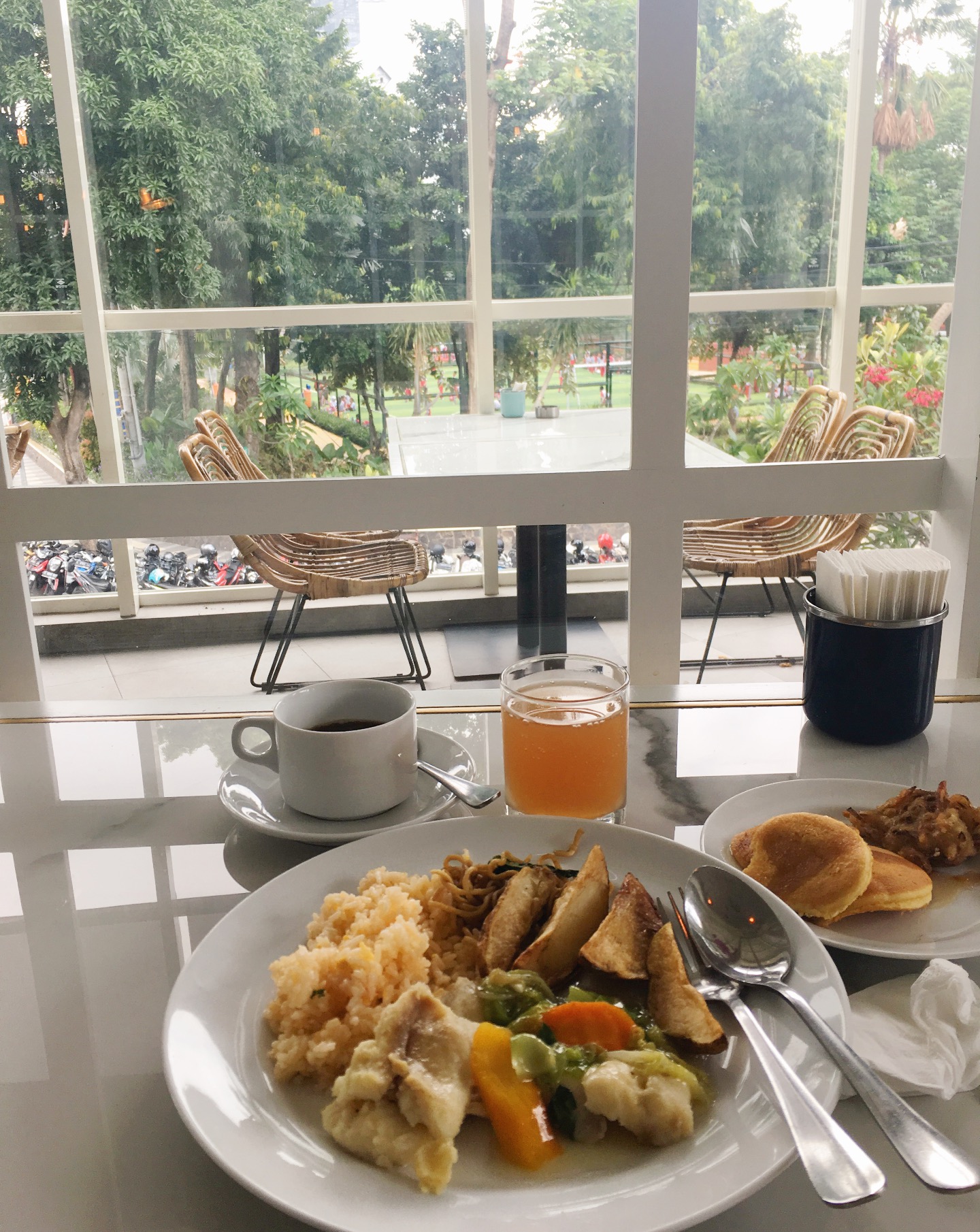 The hotel in Surabaya had a more contemporary, minimalist vibe. Breakfast was a large buffet spread; good way to get introduced to a variety of Indonesian food quickly. 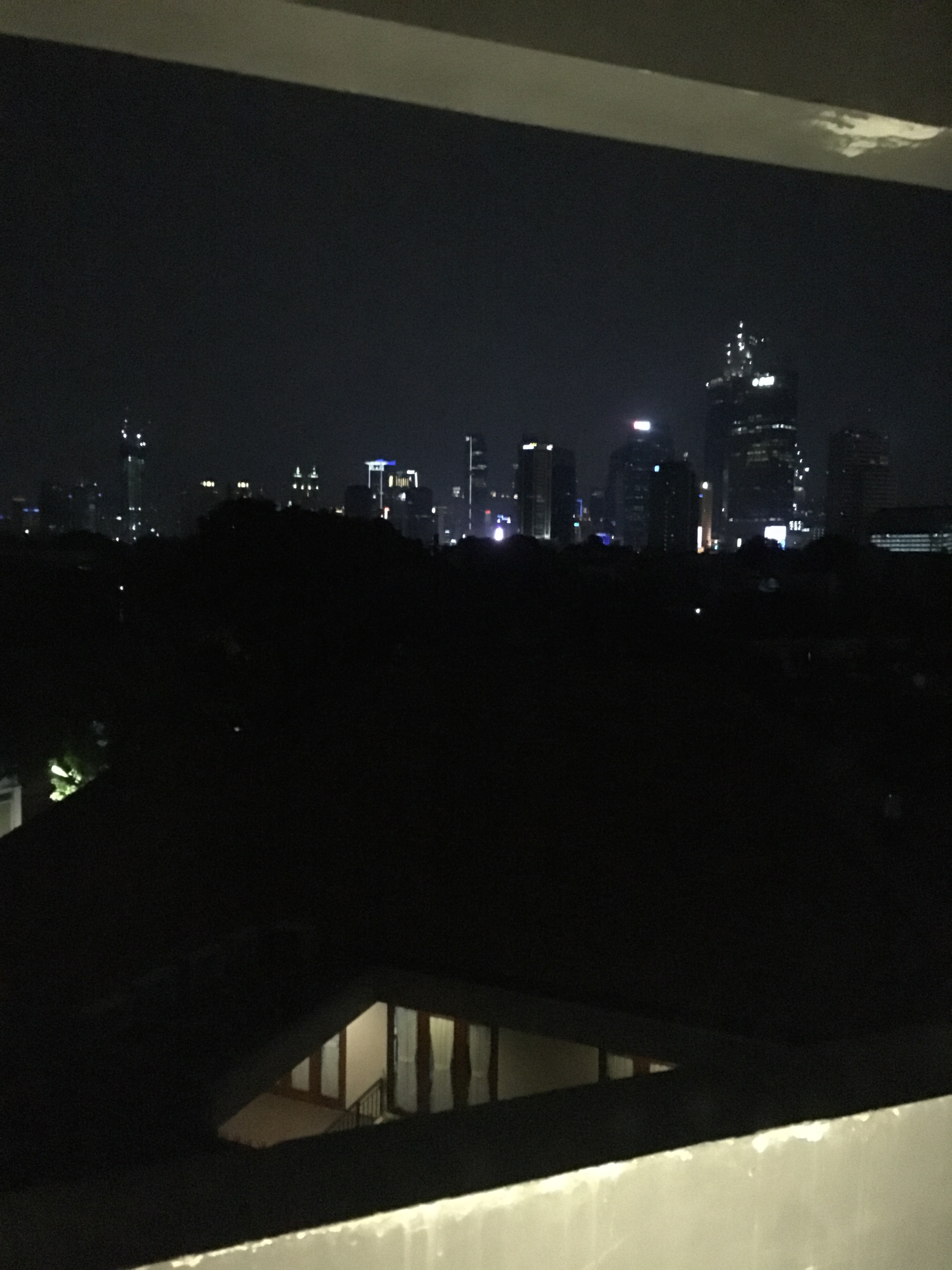 The hotel room in Jakarta was tiny but functional. The window was heavily obstructed by concrete structures so this was the best view I could maneuver.

And finally, this place in Bali was the crown jewel of my entire stay in Indonesia. Unfortunately I couldn’t enjoy any of it. We arrived at the hotel around midnight after a long taxi ride from the airport, and then had to be up by 5:30 the next morning. It didn’t help that I was consumed by a fever and chills and barely conscious. I took a hot bath in the very nice bathtub to try to feel better, but that was the extent of any leisure.

There was not much time to do any sightseeing, but here’s what we got up to. 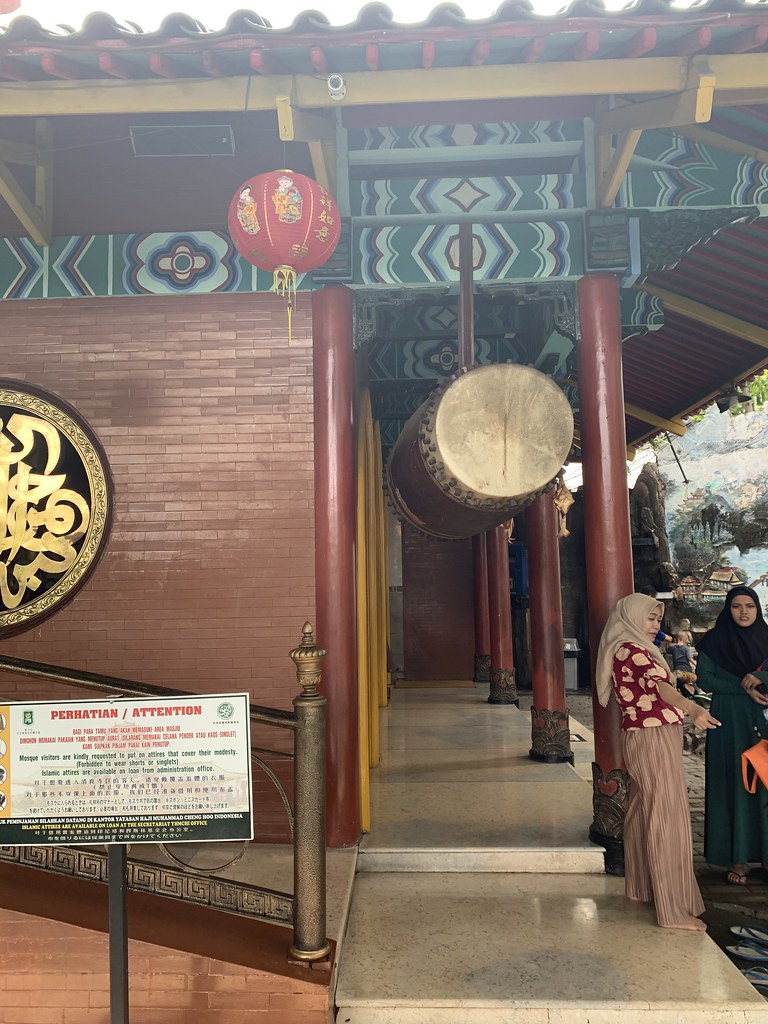 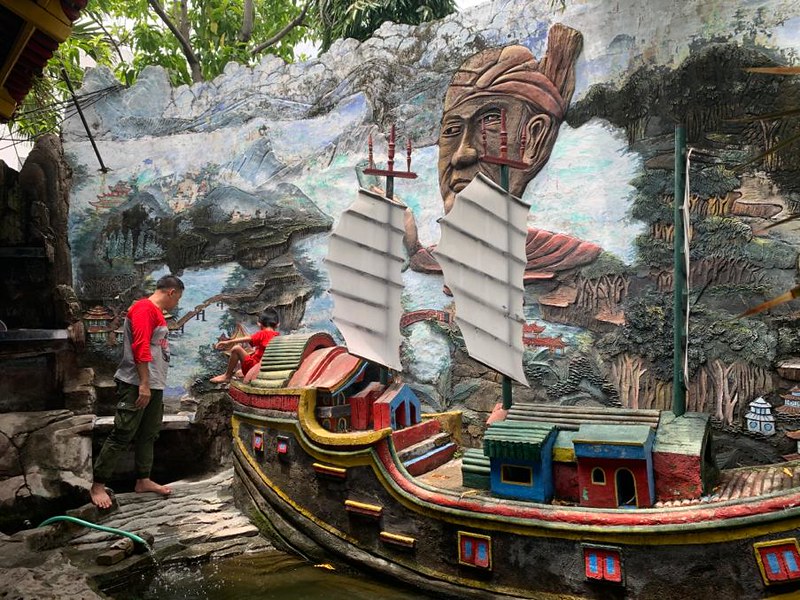 I was surprised by a lot of the things I saw and experienced, even though I shouldn’t be.

One thing that struck me was that there seemed to be more interpersonal trust in Indonesian society in general. There were several times where we would take a taxi, and midway through my coworker would ask the taxi driver to wait for us for 5 to 10 minutes while we got out and did something in the vicinity, often out of sight. And the driver would actually sit tight and wait for us to come back, even though we totally could have just snuck away and bailed on the payment! Another time, I left my bag with all of its valuables and cash in a fairly crowded corner of a temple, where tons of teens were congregating. When I got back about 20 minutes later, all of the contents were intact.

I also realized that I had, at a subliminal level, been brainwashed by the “Eat Pray Love” stereotype of Indonesia: an idyllic island nation full of beaches and happy-go-lucky locals. When I first arrived, I even foolishly asked many people whether they thought Indonesians were happier than Europeans and Americans. There was always a pause before they answered. “Uh, yeah, I guess so.” If anything, my experiences have convinced me that Indonesians are not as a whole significantly happier. They are, rather, more thoughtful and reserved. In speaking to people, I frequently got the sense that they were sharing only 20% of their thoughts and holding back 80%. Which is totally fair — as an American, I’m more inclined to share my immature thoughts openly and freely (though sometimes I do wish I had a better filter between my brain and my mouth), but every cultural context is different.

Another thing that I thought was funny: people’s reactions when they found out I wasn’t Indonesian. I can usually blend in seamlessly in any Asian country (except Thailand), and Indonesia was no exception. People would start speaking to me in Bahasa, I’d be like, “What?”, and my coworker would explain to them that I wasn’t Indonesian. The reactions were always hilarious, with people putting on the most dramatic and apologetic displays of embarrassment I’d ever seen. It’s fine! I wanted to say. I am not offended, we’re all Asian!