Reliving “The Sound of Music” and more in Salzburg, Austria // Part 1 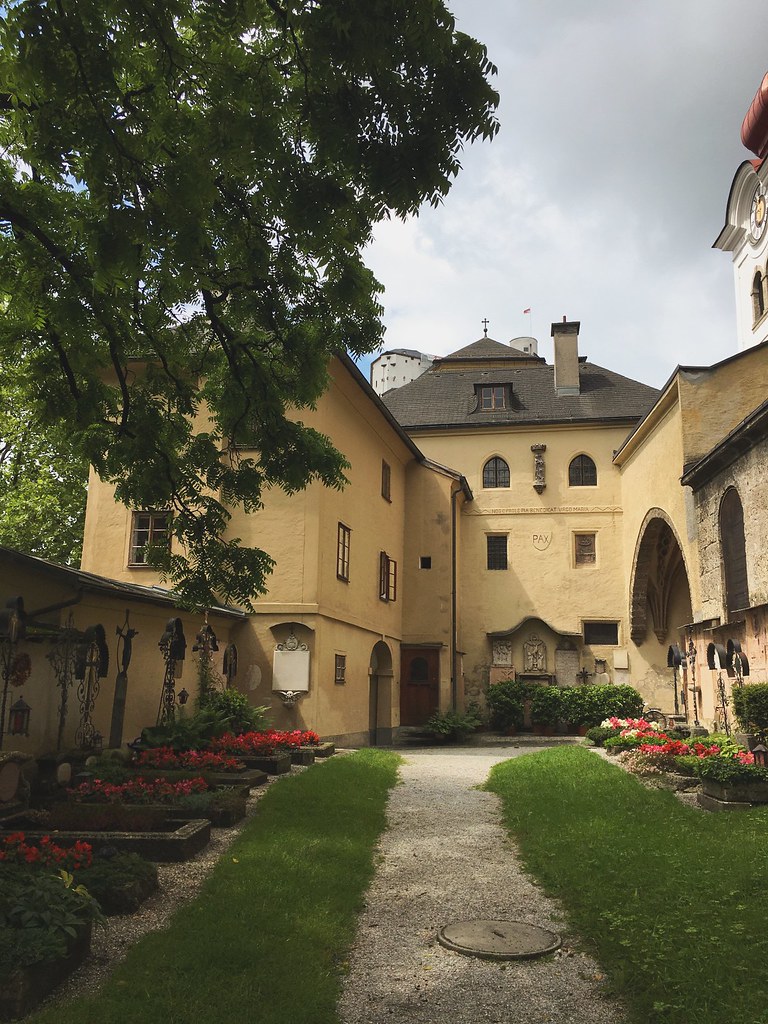 Since I had last Thursday and Friday off from work, I decided to take a quick trip to Austria, a country that has long been on my bucket list. Geneva is in western Switzerland, while Salzburg is in northern Austria, so I essentially also spent two full days on the train, crossing through two other countries on the way.

This was my first international trip since the lockdowns of early March. Borders between Switzerland and Austria re-opened on June 15, and masks have been mandatory on public transit since July 1. In many aspects, it almost seemed that Austrians had already forgotten and moved on from the pandemic, but the impact was really stark in other ways — particularly on the local tourism industry. More on this later.

My itinerary in Salzburg

Salzburg is a pretty small city and all of this can be seen in one day, although I did pace myself and left Mozart’s birthplace as the last item on my agenda for day two, before I headed off to Hallstatt. I loved all of Salzburg, but the places bolded above were my personal favorites.

My train left Geneva at 9:42am and arrived in Zurich around noon. I only had about 10 minutes to change trains, but thanks to the famed punctuality of Swiss trains, that was plenty of time.

Everyone technically wore a mask, but the actual effectiveness was in question. Many people wore it on their chins, leaving their noses poking out. As soon as they stepped off the train, people would yank off their masks and dramatically gasp for air, despite the fact that they were still surrounded by a high density of fellow passengers.

In Zurich, I transferred onto the next and final leg of my journey: a train run by ÖBB, Austria’s national railway system. Its final destination was Bratislava, Slovakia, which was tempting; I’d love to explore more of central and eastern Europe in the future. 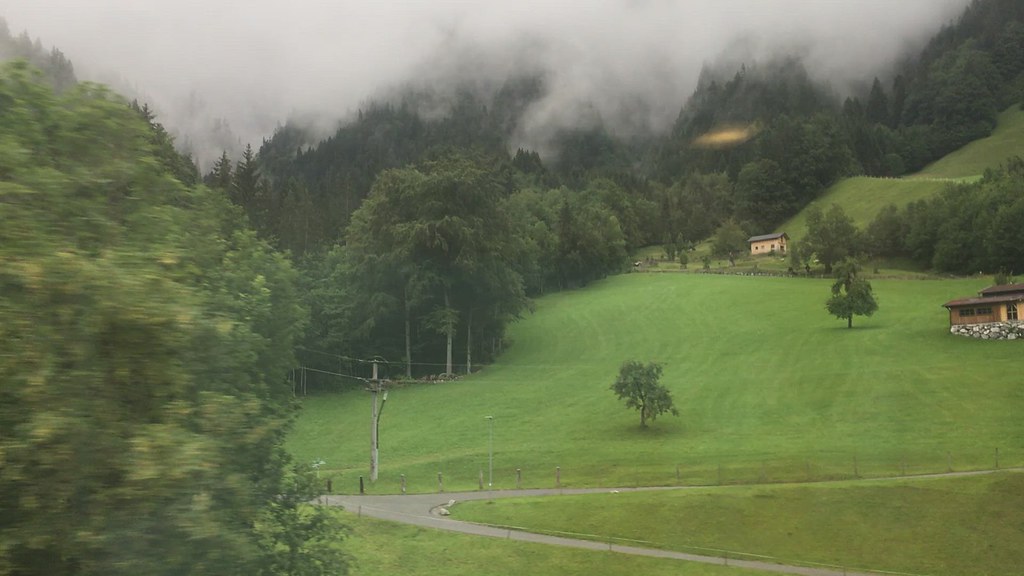 The train ride from Zurich to Salzburg offered beautiful panoramic views of pastures, villages, mountains and forests, as expected. Liechtenstein was tiny and took literally less than ten minutes to cross. We also went through southern Germany without stopping, which meant my phone went haywire at one point and notified me that I was in both Germany and Austria at the same time (uh oh). Interestingly, the mobile carrier also switched to a new temporary name — #BleibGesund, German for “stay healthy.”

We arrived in Salzburg just after 6pm. The back of my ears were sore from wearing a mask all day, and I can’t lie, it was a relief to remove the mask and wash my face once I was inside my hotel room. 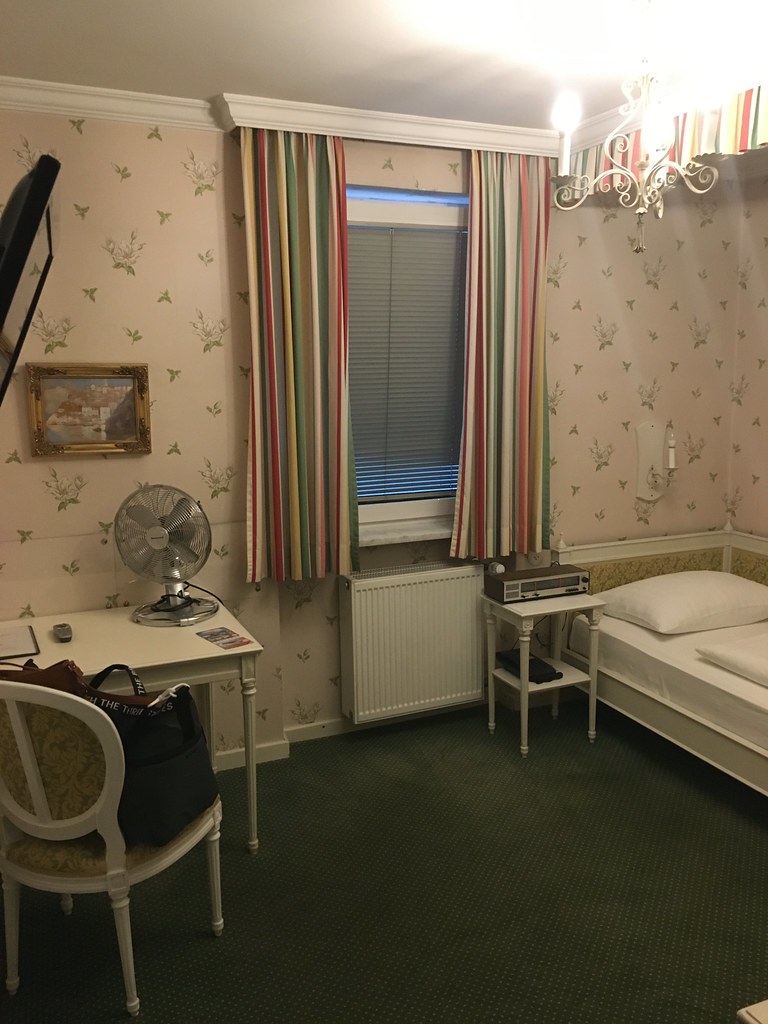 I stayed for three nights at Hotel Hohenstauffen, a family-run B&B that is a five-minute walk from the train station. As evidenced by the photo above, this place is old AF. The bed was narrow and my elbows and knees kept bumping into the wall when I turned. They used regular keys instead of key cards, and there was a functional vintage radio next to the bed.

At night, though, when it was raining and I turned on the reading light above the bed to watch Hamilton on my phone, I was able to appreciate the charm of the hotel. In that rainy moment, I was transported back in time to Austria in the 1800s, where I was a student, maybe a writer, resting my head in this storied boarding house on my way to a grand adventure that waited in the wings.

This hotel definitely operated in a universe where COVID didn’t exist. Unlike the hotel I stayed at in Lucerne last month, there were no protections or measures: no plexiglass for the front desk, no disinfectant gel, no avoidance of physical contact. They still had a breakfast buffet and a tightly packed dining room. I usually went to breakfast before 7:30am to avoid the other tourists, who all seemed to come from German-speaking countries. And by that I really mean German tourists. My god, the Germans love to travel.

I had originally tried to book a “The Sound of Music” walking tour of Salzburg with a local guide, but she messaged me to let me know that she was no longer doing tours due to her husband being immunocompromised. The only other tour available that was specific to this movie was a half-day bus tour, which seemed like too much of a commitment.

I ended up taking a ‘free’ walking tour of Salzburg that goes from 9 to 10:30am. (Like I wrote previously, ‘free’ never means actually free; I gave the tour guide 10 euros at the end.) Our meeting point was the Spirit of Mozart statue, an artwork by Marina Abramović on the riverbank that looks like a chair that shoots way up in the sky. I was surprised that so many people showed up for the tour; there must have been around 20 of us, and I had to constantly remind myself to keep an effective distance from others.

We covered a lot of ground on the walking tour. 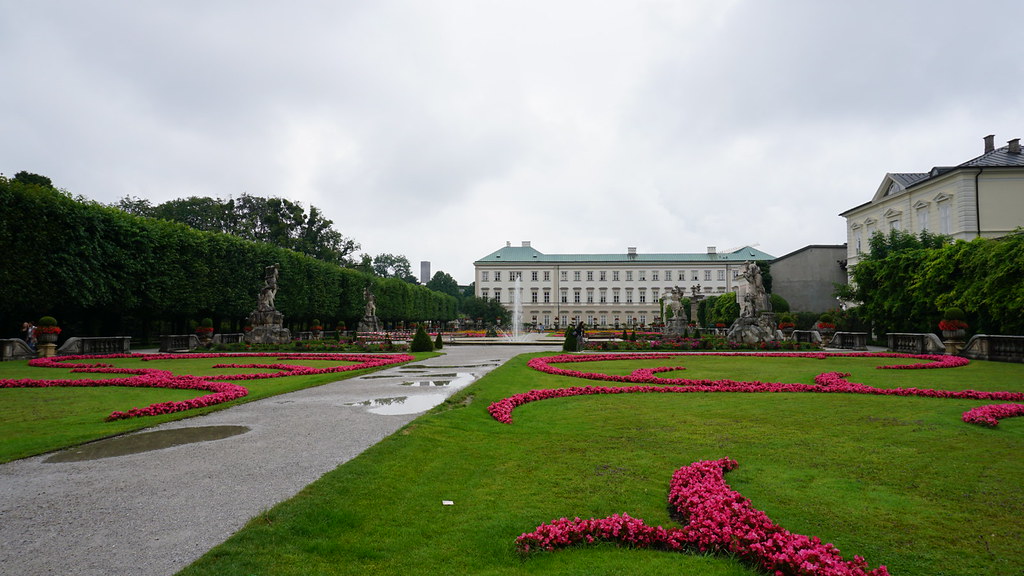 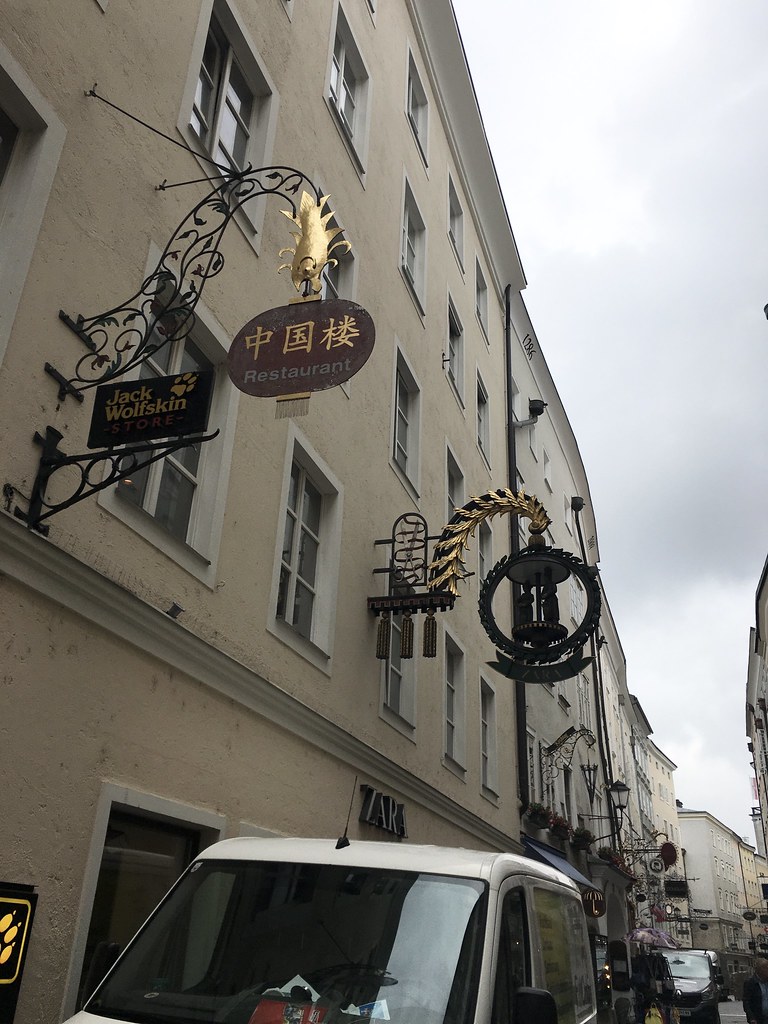 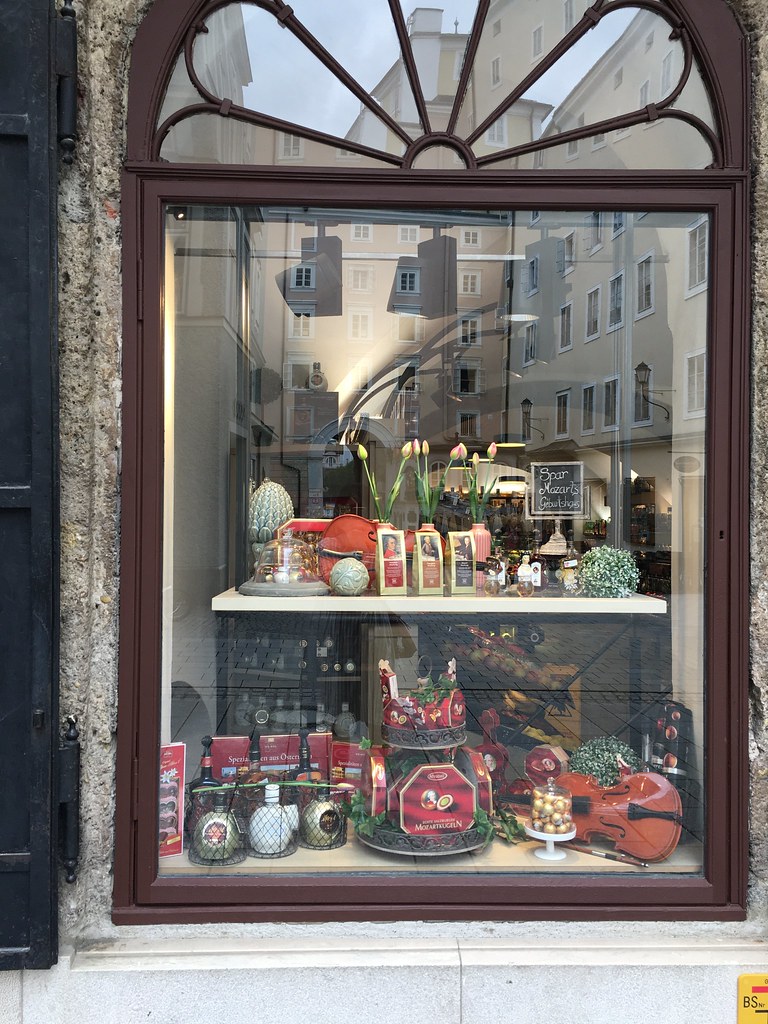 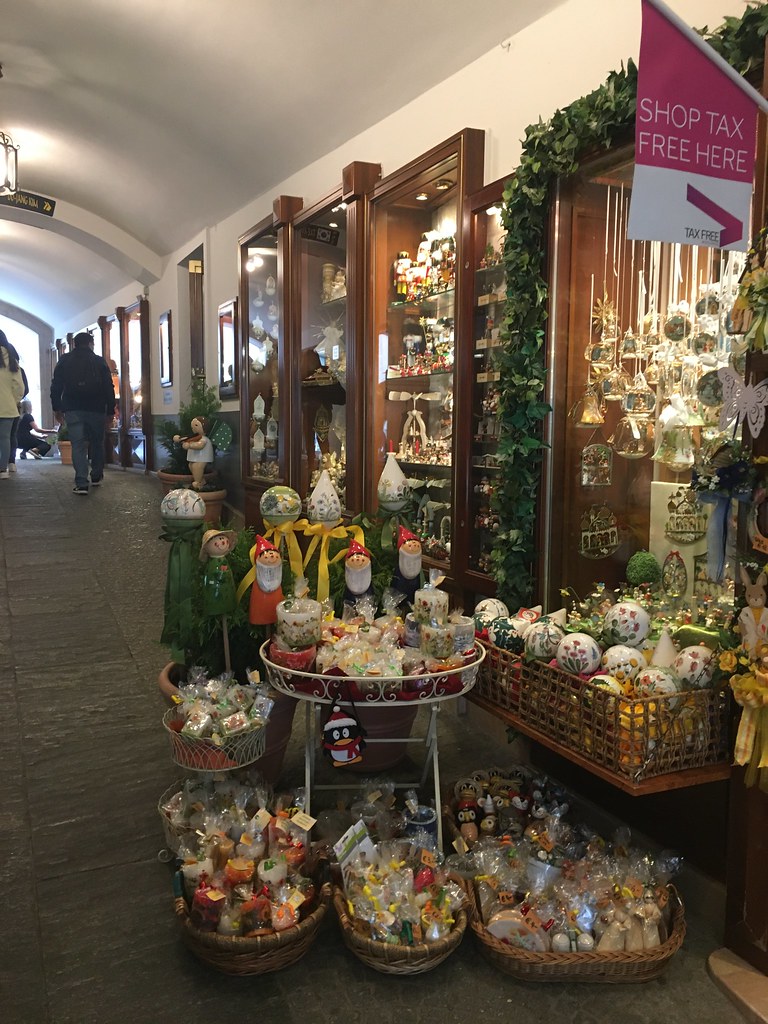 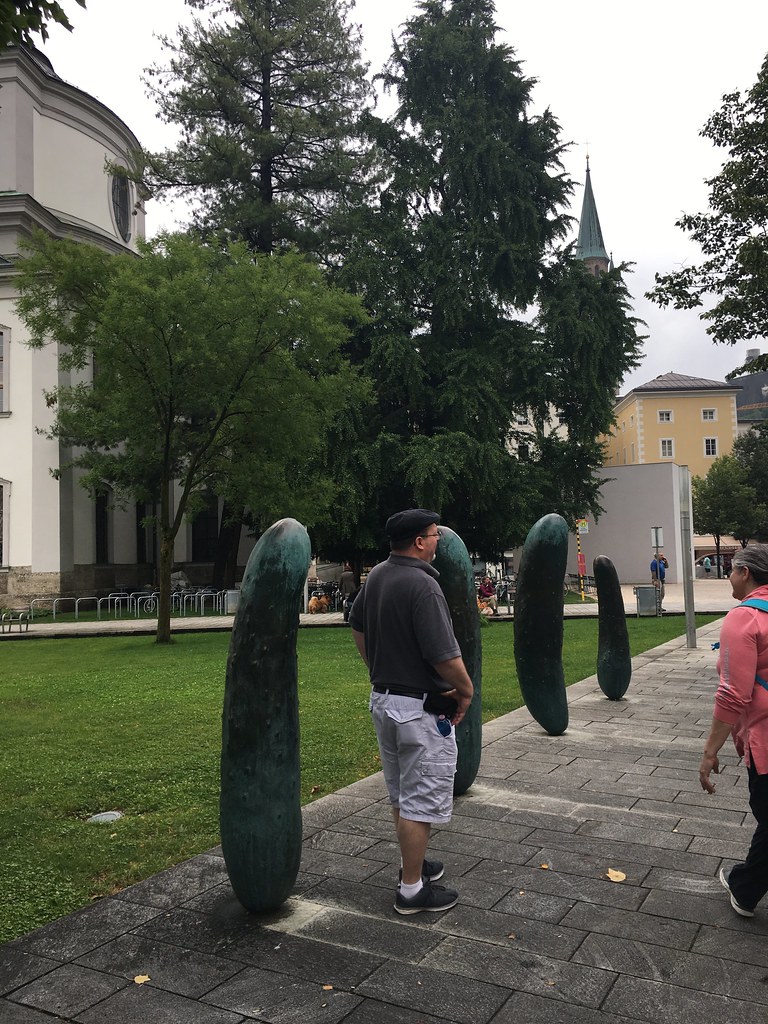 We ended the tour at a nearby statue of Mozart. (Speaking of, it was funny how everyone in Salzburg kept dunking on Mozart’s appearance – “he’s not as attractive as the statue, don’t be fooled!” Even the museums at Mozart’s old residences were like “dude was an uggo and super short, too.” Give the poor guy a break!)

There was a tourist information office right there, so I walked in and purchased the Salzburg card. It was 29 euros for 24 hours, during which you could visit all the museums and tourist sites, as well as take public transportation for free. Given that I went to four different ticketed attractions and also took the bus like five times, it was definitely worth it.

The fortress can be reached either by foot or by funicular. I took the latter because I didn’t know how strenuous the uphill climb would be, and wanted to be careful since my heart can act up in these situations. It later turned out, when I made my way downhill, that this would have actually been a relatively easy and painless walk. 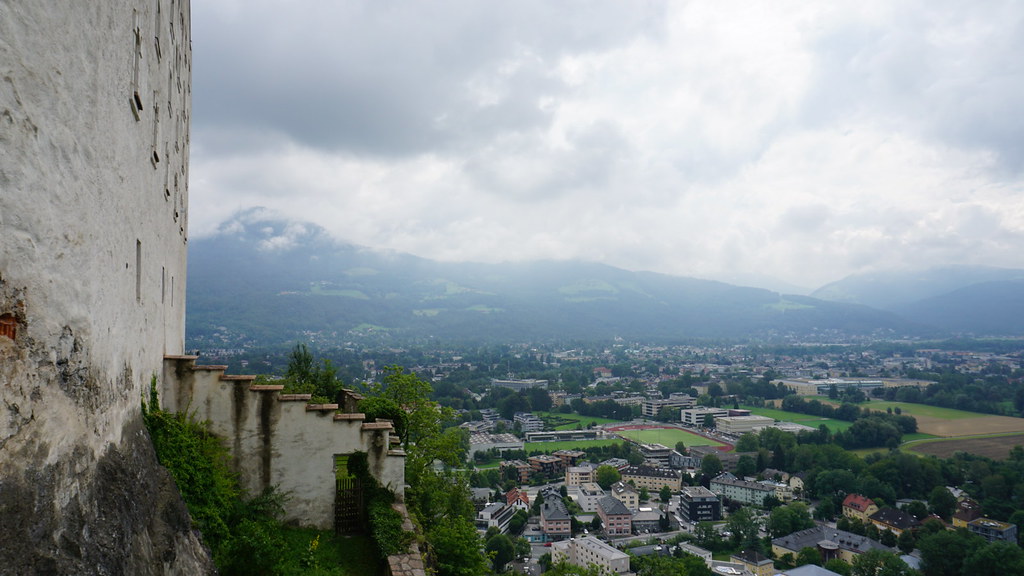 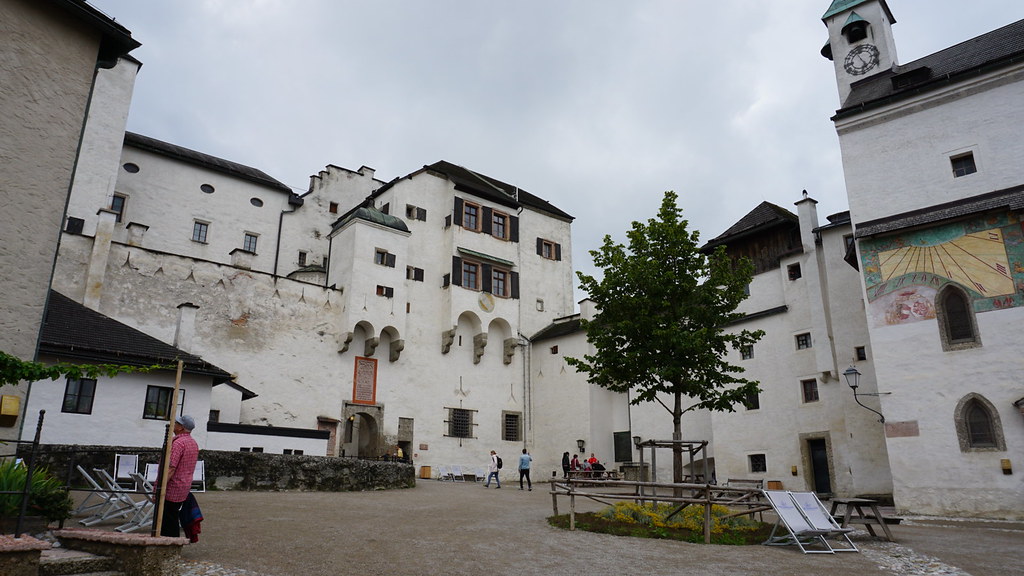 The convent where Maria was studying to become a nun was just a short walk away from the fortress. 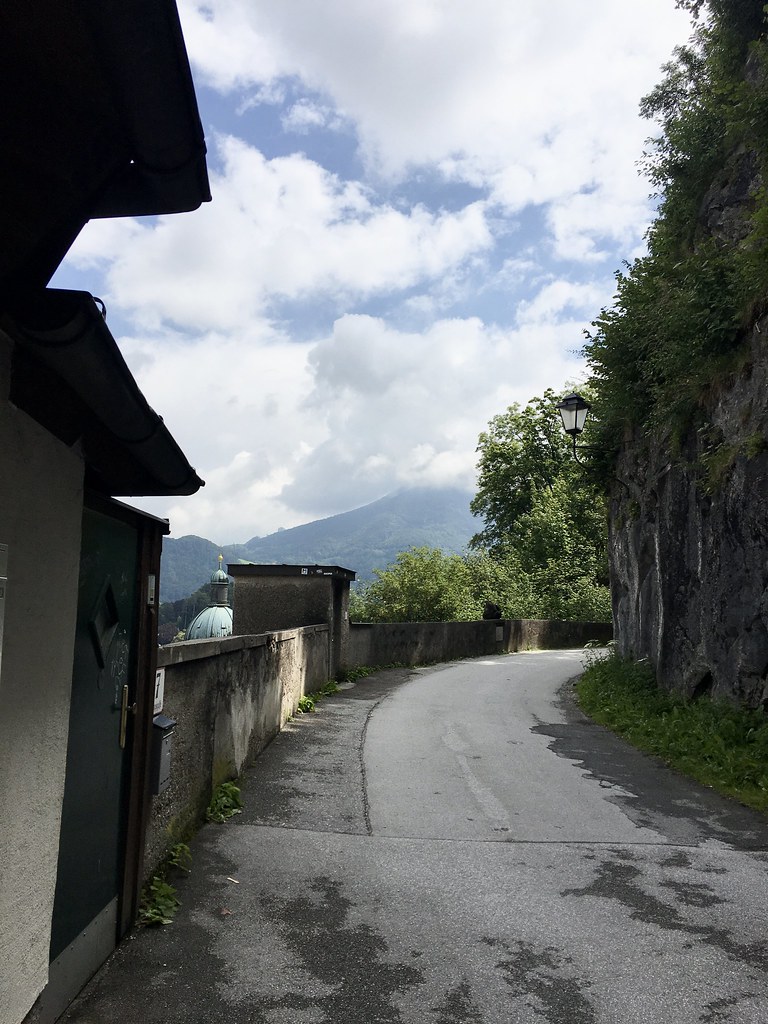 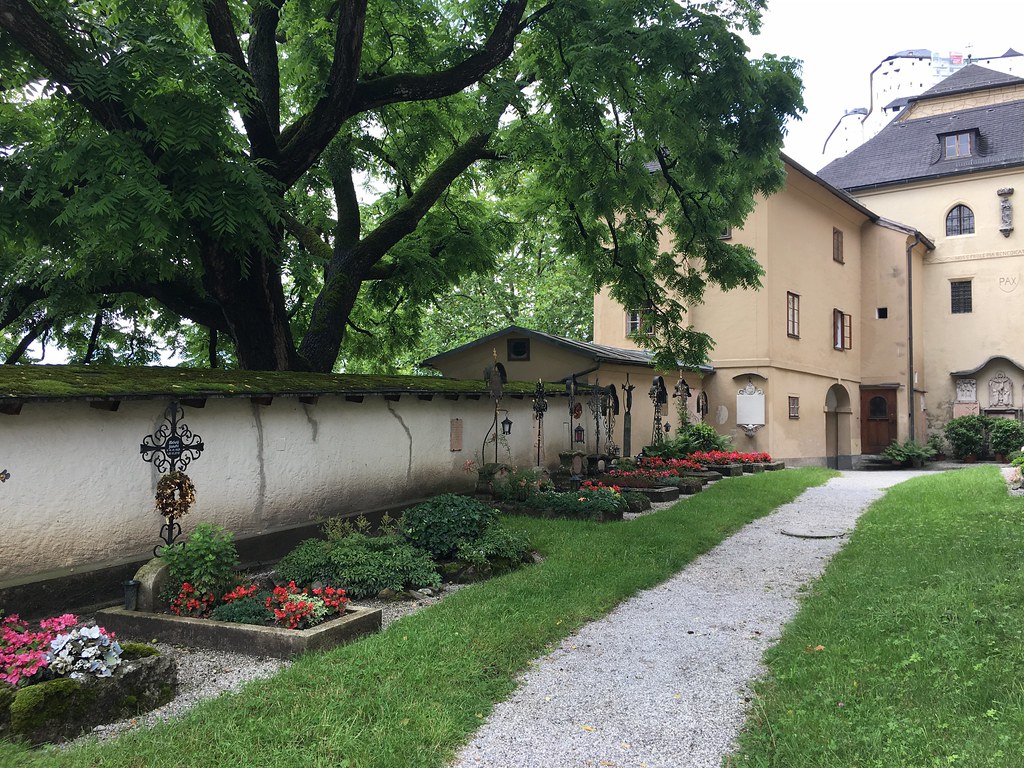 The burial plots behind the convent church were covered in blooming flowers. It was completely silent, and I felt at peace. 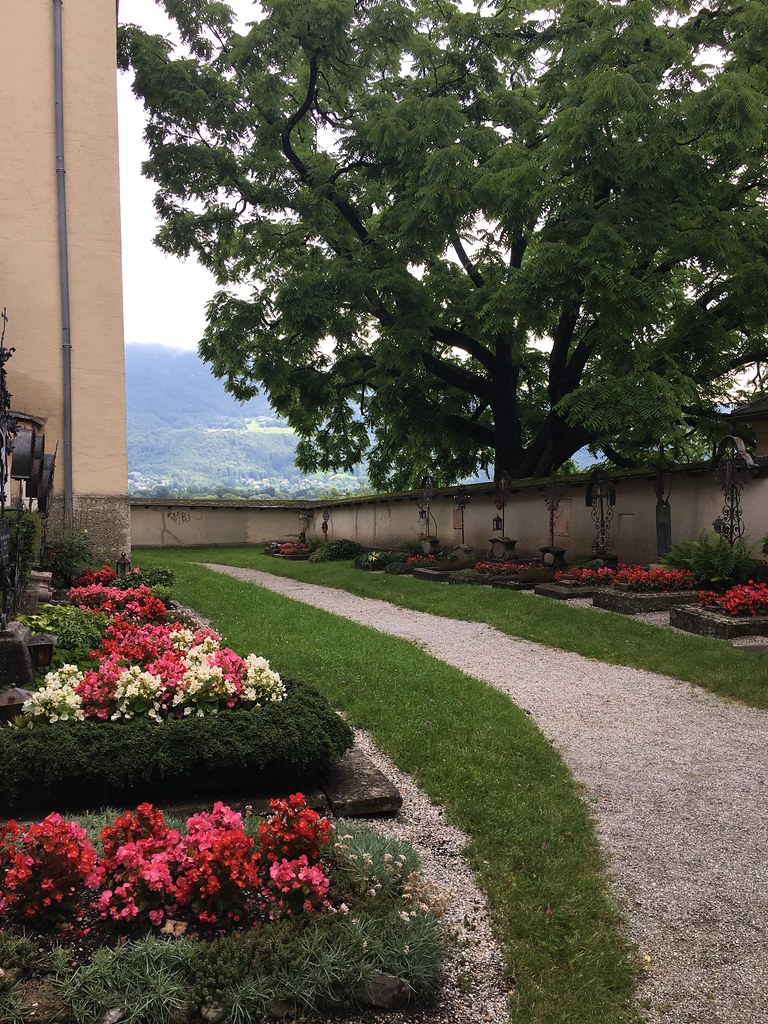 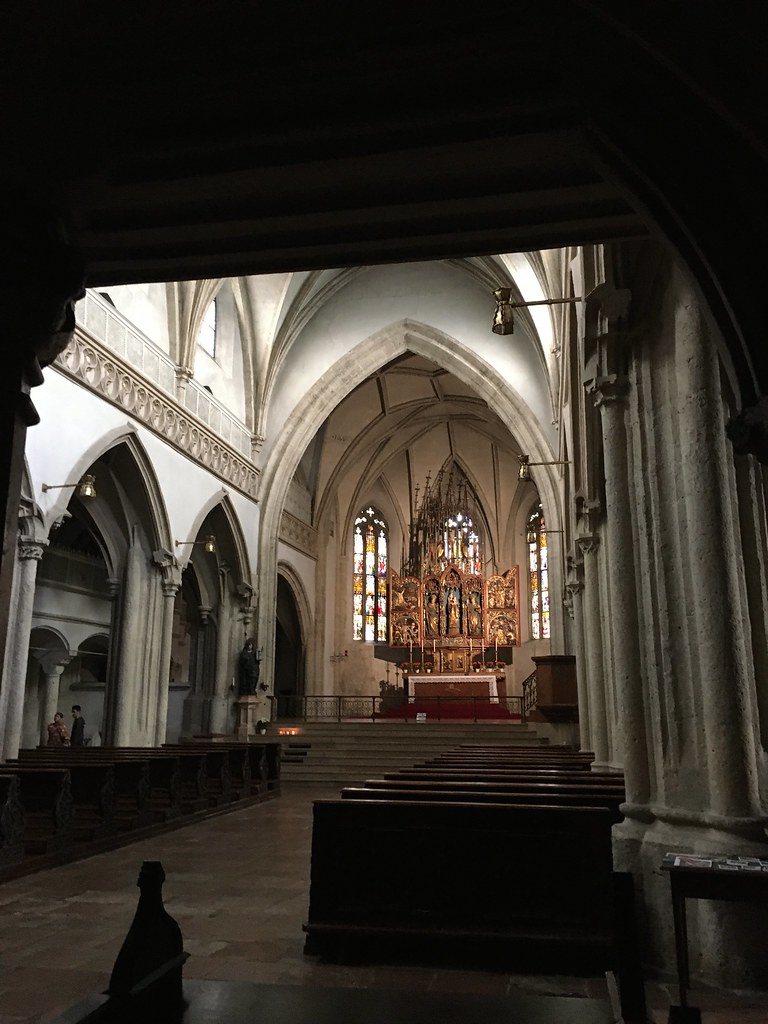 After that, I walked back to Getreidegasse and had lunch and a coffee at an Italian restaurant that had an airy biergarten vibe. I just walked in and sat myself down at a table, which I generally tend to assume is how things work in European restaurants, unless there is a sign or host stand stating otherwise. The staff was super nice and attentive, and the food was prepared quickly. 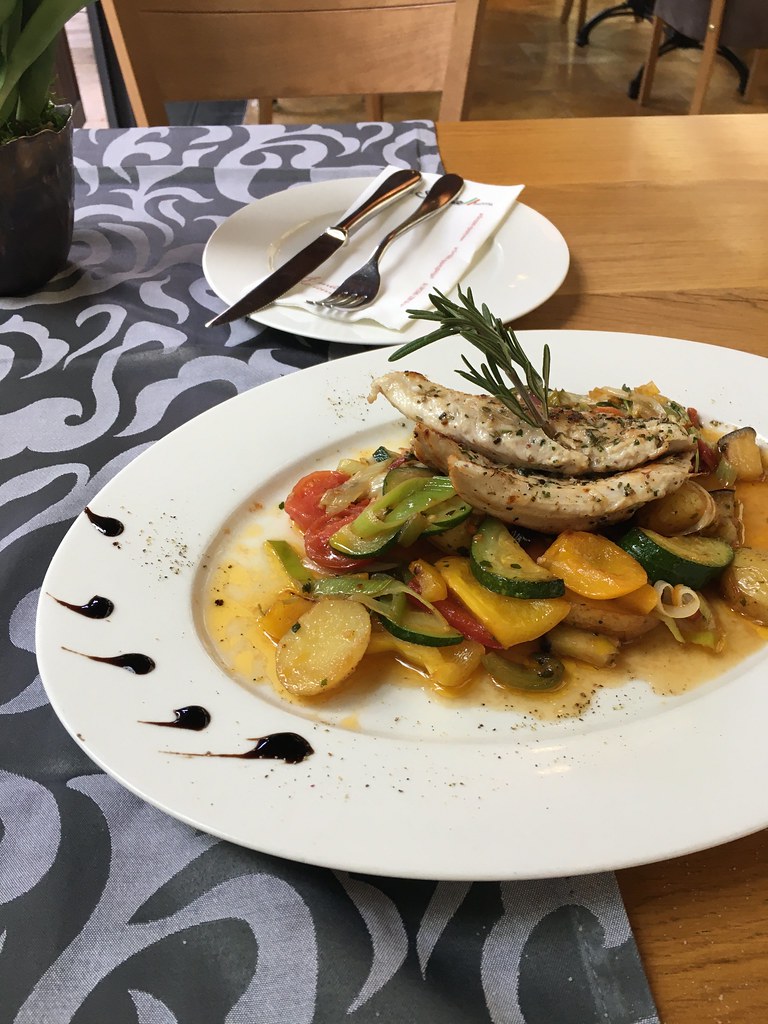 I had seen so much and it was only 1pm! My next stop — one of the most beautiful cemeteries I have ever encountered. To be continued.