A brief history of my love for train travel

Why is this blog called “Train to TBD”? While I am not militantly anti-plane travel (I mean, last year alone, I flew like 8 times), I vastly prefer train travel to any other form of transportation. People who have followed been subjected to my travel stories over the past year know that I would rather spend 6 to 10 hours a day sitting on a train when I could have flown to that same destination in just 2 hours.

There are a couple of reasons for that. A: it’s better for the environment. B: it’s also better for my anxiety; I am always stressed during takeoff and periods of turbulence. And the biggest reason, C: this might sound dramatic, but train travel is a part of my identity at this point. It’s how I was raised. It forms the core of my fondest childhood memories.

When I was a kid living in China in the 90s, we didn’t have a car. We didn’t know anyone who had a car. And plane travel was so expensive back then, only rich people flew. Trains were how we visited different cities, how we saw family. Every few years, we’d embark on a 3-day, 2-night train journey from the east coast to the northwestern province of Xinjiang, where my mother’s side of the family lives.

Those train trips always felt like the biggest adventure, but they were familiar, too; we usually booked our beds in the ‘hard sleeper’ car, which had 6 beds per compartment (as opposed to the ‘soft sleeper’, which had four). We always got at least one bottom bunk bed, which was more expensive, but it had enough space for you to actually sit up on your bed and enjoy a meal on the bedside table. Of course, the unspoken rule was also that during the day, you had to be a good sport and allow the people in the middle and top bunks to descend and sit on the edge of your bed so that they could chat, play cards, talk on the phone, or just sit back and let their spines decompress. I once woke up, dazed from a mid-afternoon nap, to find two young men sitting on my bed, playing cards with the guys from the opposite bed. “You should get up and wash your face,” one of them advised. “If you sleep for too long in the afternoon, you won’t be able to fall asleep at night.” I blinked and dozed off again.

One thing Chinese people have in common with Americans is the ability to talk to strangers as though they have known each other all their lives. This is particularly evident on trains. Once, when I was 16 and on a train from Shanghai to Urumqi, the woman across the bunk started telling me about a monk that she had consulted back home, who had told her that she was facing a few years of misfortune and must immediately take a series of random-seeming but fortuitous actions. “That sounds like bullshit,” I had said bluntly, a tactless teenager. “There’s no such thing as knowing someone’s fortune, and these monks are all scam artists. Don’t listen to them.” The woman remained doubtful.

On that same journey, I also got into a conversation with the guy in the opposite top bunk, a soldier on his way back to deployment in Xinjiang. “Do you think they’ll ever send you to go to war one day?” I asked. The soldier was surprised. “War against whom?”

The soldier also confessed to me that he was worried about something the Chinese call “the big event shaping one’s permanent destiny”: marriage. He was fast approaching thirty and couldn’t find a suitable girl in his village, since most women didn’t want to marry soldiers, who were away from home all the time and couldn’t help with raising kids. “Sorry to hear that,” I told him.

When it comes to other countries, though, I have only scratched the surface when it comes to train travel. Whenever intercontinental travel becomes safe again, I would love to go back to Japan and explore the country in depth by Shinkansen. 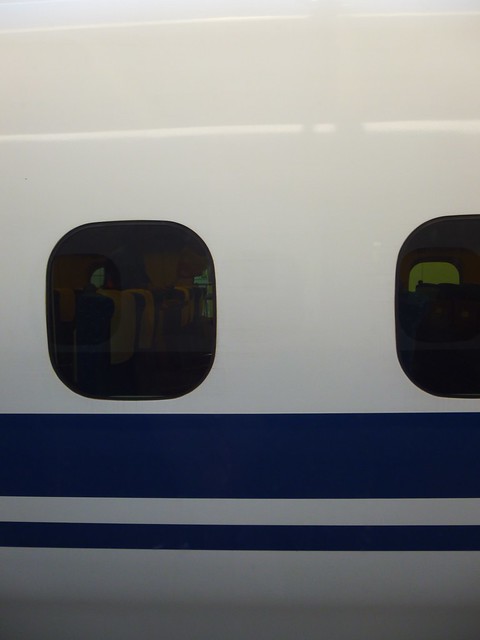 In the US, the Amtrak northeast corridor service has been pretty decent. During the years I lived in DC, I took multiple train trips to Baltimore (like 1 hour?) and New York City (3.5 hours). I always felt this buzzing energy building inside me as we approached Penn Station and people began to reach for their bags.

And of course one of my favorite train journeys of all time is in New Zealand. When I visited in late 2018, I took a roundtrip train between Christchurch and Greymouth, and the scenery was simply nonstop incredible. 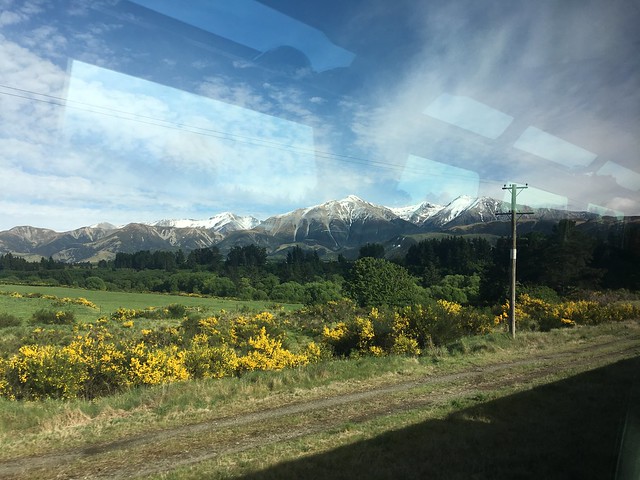 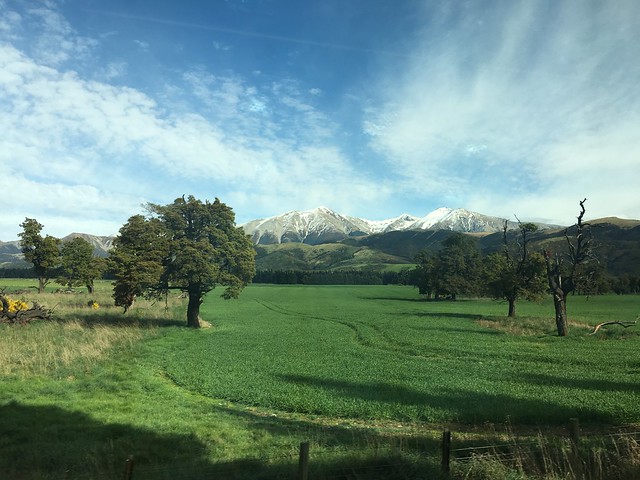 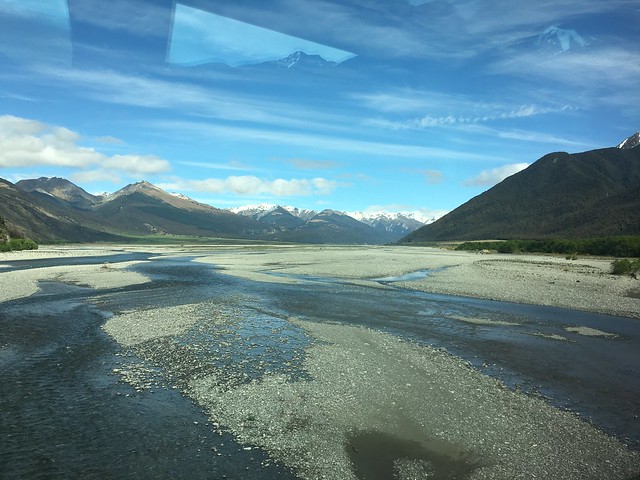 And train travel in Europe! I visited Europe for the first time in December 2015 and was very taken with this lovely porcelain-themed train that took us from Versailles back to Paris. 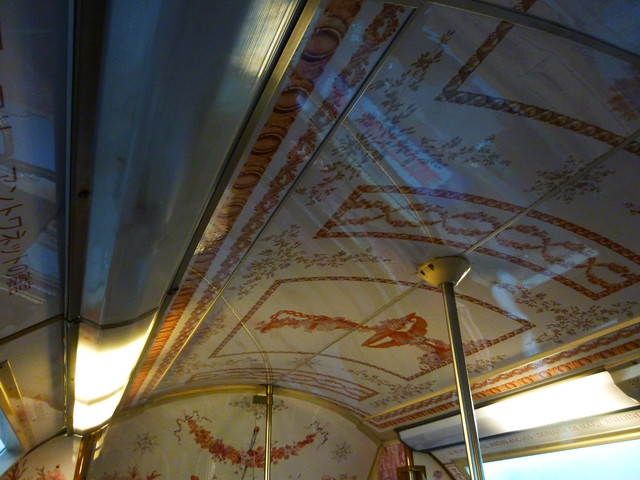 In the years since, I have visited Italy, Spain, the UK, Germany, Belgium and Austria by train, and all have been pleasant, efficient experiences. I do think Switzerland takes the cake, though, when it comes to scenery alone. There’s winter… 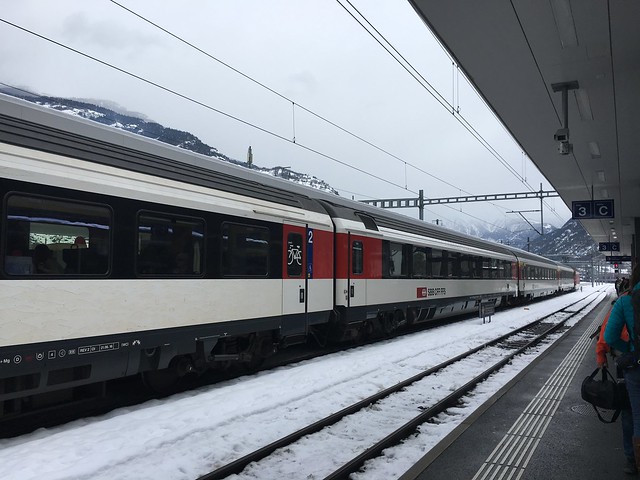 … and then there’s summer. This is what it looks like coming back to Geneva from western Switzerland, overlooking the vineyards by Lake Geneva. I still haven’t found a comparable view anywhere else in Europe, but Austria is a close second.

Before the pandemic, I’d been planning my biggest train trip ever. I was going to do a slow trip from Geneva to Istanbul, staying for a day in each major city along the way: Zurich, Innsbruck, Budapest, Bucharest. The funniest part is that I was planning this trip in late March, for late May, thinking that COVID should have subsided by then. It’s a good thing I never actually pulled the plug and bought any tickets. But I’m still hopeful it can happen one day.