Part 1 of my five-day journey from the south of Switzerland to northern Italy.

Swiss politicians like to say that Switzerland is a diverse country. What they really mean by that is that there are four official languages: German, French, Italian and Romansh. I live in the French-speaking part and have been to the German-speaking parts plenty of times, but had never visited Ticino, the Swiss canton closest to Italy. I was curious to find out: is Ticino more Swiss or Italian? And how does it compare to real Italy?

I started my journey in Bellinzona, the capital city of Ticino. It was surprisingly challenging to get there because one of the tunnels between Geneva and Milan is shut down for construction; what was a four-hour direct train trip last year now required multiple transfers. My train departed Geneva at 8:40am, and I had to transfer once in Zurich and again in Rotkreuz before arriving in Bellinzona at 1:30pm. My connection in Rotkreuz was only six minutes, but thanks to the punctuality of the Swiss train system, I made it with three minutes to spare.

The view along the way was superb. The German-speaking parts of Switzerland (e.g., Interlaken, Brienz, Lauterbrunnen) get all the attention, but Ticino was stunning in its own right. 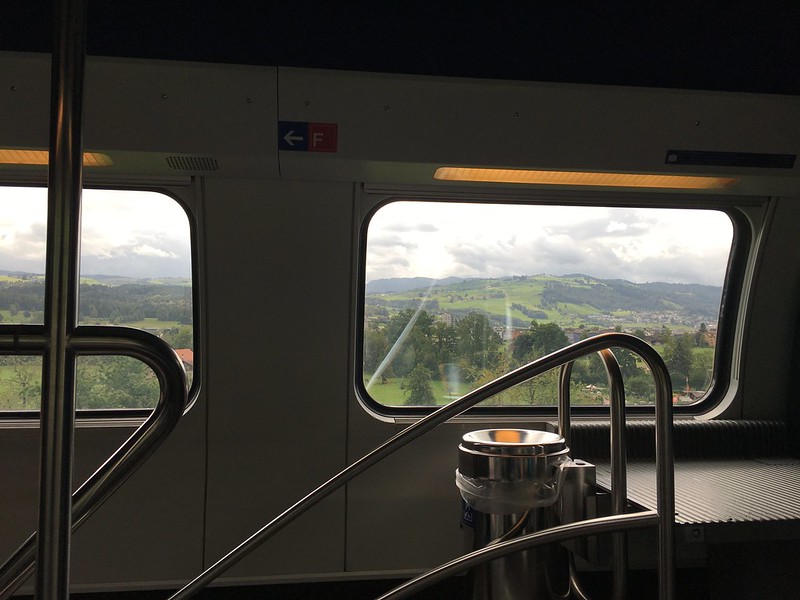 I booked a room at the Locanda Marco, a restaurant that recently branched out into the hotel business by adding four rooms to its top floor. It was a 12-minute walk from the train station, but the entire trek is through the main ‘downtown’ shopping street and the local plaza, so it felt quite safe. It was a Sunday afternoon, so all the shops were closed. Except for small clusters here and there at outdoor cafes, there were few people around.

When I arrived, I was surprised to find a jolly-looking man (who was most definitely a chef, he had that energy) sitting on a chair outside the hotel, apparently waiting for me. “Buongiorno,” he called out as he got to his feet.

“Parla inglese?” I asked, and the guy shook his head. “Vous parlez français?” he suggested.

I was definitely not expecting to have to converse in French in Ticino of all places, but I have to say, all those laborious hours spent in evening French school, the extra one-on-one conversation classes, the 20 minutes a day I spend watching French news — all that paid off in this one glorious moment. We discussed several matters of great importance: what time did I want to have breakfast in the morning? Did I want still or sparkling water to carry up to my room? Where could one locate the Wi-Fi password?

It helped that Monsieur Luca — the restauranteur and hotel owner — was clearly not a native French speaker either, though he was of course much better than I was. But the fact that he was an Italian speaker actually helped a lot with comprehension: unlike the French, who tend to mumble and slur their words together, his enunciation was clear, and his cadence easy to follow.

(This was not the first time French would come in handy on this trip.)

I was blown away when I saw the room. There was a straight-up, uninterrupted view of Montebello, one of Bellinzona’s three castles!

The hotel was absolutely lovely. Clean, new and pristine, with a big glass bottle of water instead of plastic bottles. There was functioning A/C, but the windows could also be opened for air.

Montebello was only a 15-minute walk away, according to Google Maps. I set out on foot.

Soon I found the flight of steps leading up to Montebello. I don’t know why I was surprised by the strenuous uphill climb — I mean, from my hotel window I could LITERALLY see that the castle was on a mountain. But it didn’t click until I was gasping for air and struggling to keep my mask on (there were other people a few steps below me). I had to stop three times mid-hike to hydrate or to pretend that I was taking a picture.

Once you get up there, though, the sweeping view of Bellinzona is pretty spectacular.

It was possible to walk atop the walls of the castle for a fee of 10 francs. I spent 28 francs on a three-castle pass (which also included access to some Leonardo da Vinci exhibit that I wasn’t able to find), which I later realized did not work out that well for my situation: I was only able to make it to two of the castles, and again, I couldn’t find any of the exhibits referenced in the pass. I’ve written it off as a contribution towards boosting the local tourism sector in these challenging times.

The castle seemed to be a popular place for local families to picnic, play and relax. Isn’t it wild, the idea of literally growing up around a medieval castle? The Swiss are so lucky in more ways than one.

After exiting the castle via drawbridge, I found myself on a long, sloping path downhill. It was teeming with bees and geckos, but weirdly that’s the one thing living in Geneva has normalized for me: the abundance of small wildlife everywhere. I was completely alone, and I felt so at peace.

I set off towards Castel Grande, another castle that was just a 10-minute walk away. This time the elevation was lower, so I didn’t huff and puff as much, but it was still blazingly hot.

This sounds silly, but it seemed like maybe the sun was bigger here or something? Because I was covered in sweat by the time I reached the grotto outside the castle and promptly collapsed into a chair. An iced Coke brought me back to life.

There was a small museum exhibit inside Castel Grande that was covered by the Bellinzona pass, but I wouldn’t recommend it unless you’re a huge fan of coins.

The castle grounds were quite charming. There was a group of people gathered under the tree for what sounded like an English-language meetup or class.

There was an escape room at this castle (?!), but as far as I could tell it was closed that day, or probably because escape rooms might not be the best idea right now.

I debated going to the third castle, but by that point the buses were close to stopping for the day, and I had walked for so long under the searing sun that I was afraid of getting heat exhaustion. I began making my way back to the hotel.

No one else was in the building when I arrived. The restaurant was closed on Sundays, and it appeared Monsieur Luca had only stayed long enough to check me in. So I was alarmed when I tried to access my room with the previously untested key card — and it didn’t work.

Cue internal panic. My first step was to pull out my power bank and hook it up to my phone, which was hovering precariously at 49%. Next step: look up the hotel’s phone number on its website and call it. I heard the phone ring in the empty lobby. That was no good.

My next call was to Booking.com, through which I had booked the hotel. The customer service agent told me that she’d contact the owner and put me on hold. When she came back, she sounded uncertain. “I spoke to someone,” she said, “but I don’t think he spoke English.”

No shit, I thought. I asked her for Monsieur Luca’s direct line and called him; he picked up right away. “Bonjour,” I said, trying yet failing to keep my voice even, “il y a un problème!”

I explained that the door wouldn’t open, despite my many attempts. “Are you pushing it hard enough?” he asked. “You have to push it at the same time that the light turns green.”

“But I’ve already tried that!” I said, a little more crossly than I intended.

He assured me that someone was on the way. After I hung up, I realized that it was the first time I had successfully carried a phone conversation entirely in French.

After about half an hour, a man showed up at the front door and knocked, signaling me to let him in. I hesitated, then did. We got into the elevator — I tried not to think about the fact that there was a 50/50 chance this guy could kill me in this building where we were the only two people — and rode up to the top floor, where the guy showed me how to work the keycard. “You have to push it hard,” he said, setting his palm against the door. “Push it right when the light flashes green.”

The door clicked open. I thanked him sheepishly, my head hanging in shame. Poor Monsieur Luca had been so patient with me when indeed, all I had to do was push!

It was strange being the only person in the hotel that night. I knew that I wasn’t in danger — the front door was locked, and after all, this is Switzerland — but still, it was such a bizarre feeling, the knowledge that I was all alone in this large four-story building, with a silent restaurant beneath me. In the morning, the hotel finally came to life when a woman arrived to prepare breakfast. She had set the long table for one: I could have all the bread, yogurt, ham and cheese that I wanted.

After that, it was time to venture deeper south — to Lugano, the largest city in Ticino.