A lonely excursion: Zurich and Lucerne 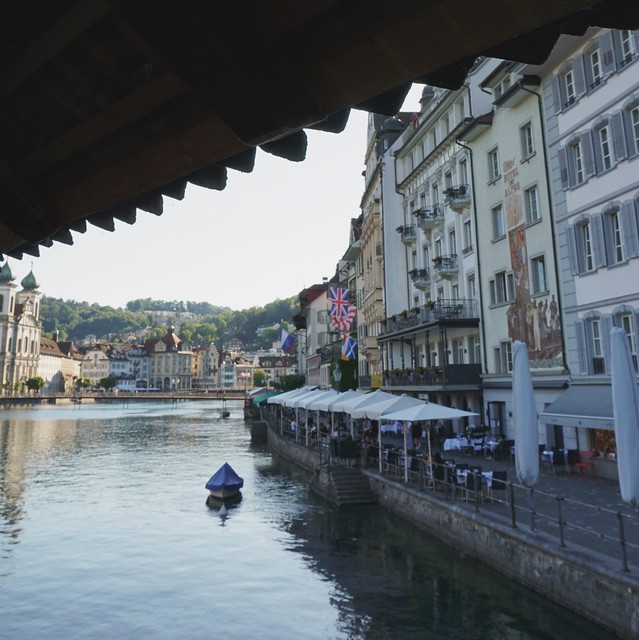 Back to blogging about travel.

This week I decided to take a few days off and do a little domestic excursion. Switzerland has managed to flatten the curve when it comes to the first wave of the coronavirus, with only about 10-30 new cases per day. Restaurants, salons, museums, and all shops have now re-opened, and this week Daniel Koch, the head of Switzerland’s COVID-19 response, officially retired. On June 15, we will open borders and resume freedom of movement with neighboring Austria, Germany, and France. And in July, travel restrictions within the wider Schengen zone might be lifted as well.

I have no plans to travel internationally at this point, but I do know that I’m lucky enough to be “stuck” in one of the most beautiful countries on this planet, and there’s still so much I haven’t seen.

I wore a mask — mostly. I’ll get into this more later. I also carried a bottle of hand sanitizer in my bag and stayed away from other people when possible. Not that it was hard; aside from a few retired couples here and there, I didn’t see many other tourists. 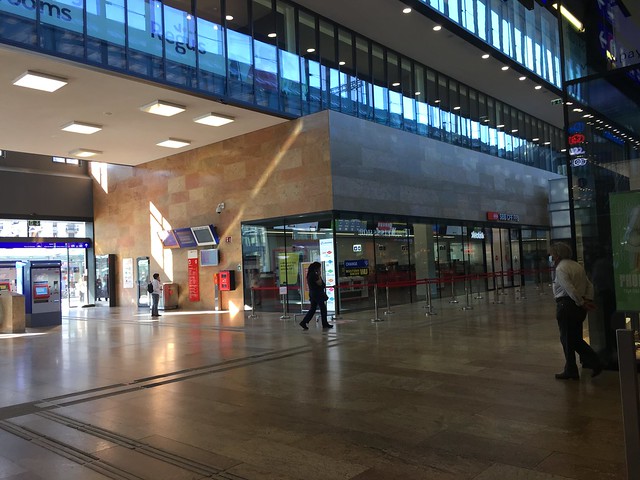 Geneva’s Gare Cornavin was the quietest I’d ever seen it. There are only three people in this photo, and the two on the right are both wearing masks. Being so close to France, the city was hit hard by COVID, and there are still a lot of people in masks, especially on the bus and at grocery stores. I bought a sandwich to eat on the train. 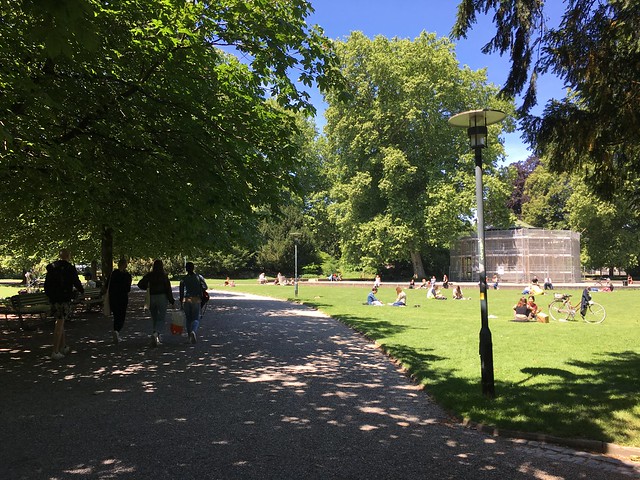 Zurich was a different story. It was a beautiful, sunny day, and it felt like the whole city was outdoors for a giant picnic.

I took the tram to Oerlikon, a suburb of Zurich, to a Japanese-owned salon where I got my hair cut for the first time in over 3 months. We had to communicate through a mixture of Japanese and English, since I didn’t speak German and she didn’t speak French, but the cut turned out well and she eliminated the equivalent of a rat’s nest from my wildly overgrown hair. Both the stylist and I were required to wear masks the whole time, and instead of credit card or cash, she asked that I pay her via bank transfer the next day. She also gave me a postcard and a shampoo sample.

I arrived in Lucerne a little after 4pm. I adored the hotel that I stayed at, Hotel Des Alpes Lucerne. It’s across the river from Lucerne HB and also directly overlooks the landmark Chapel Bridge. They also gave me a free upgrade to a room with a balcony. 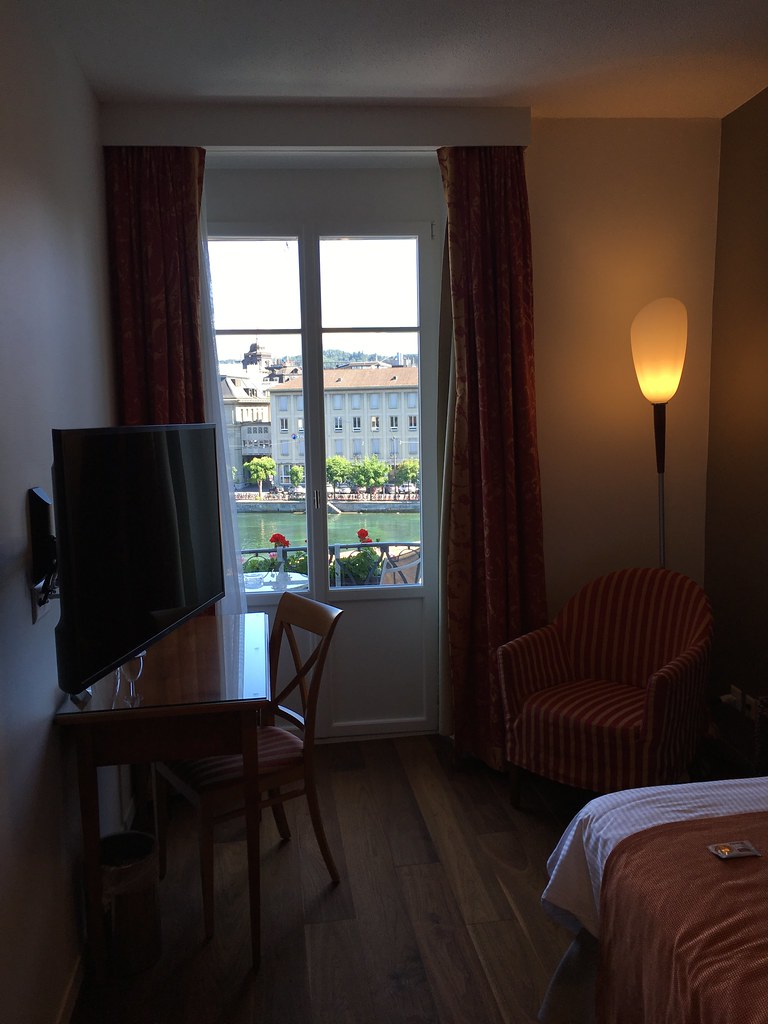 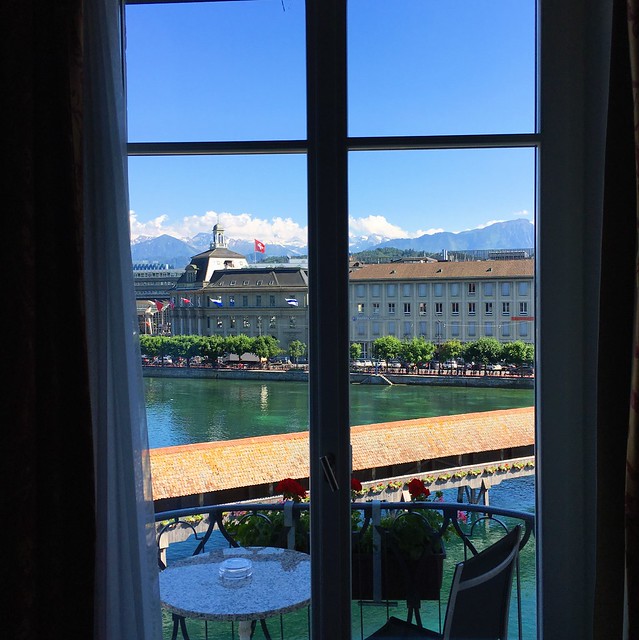 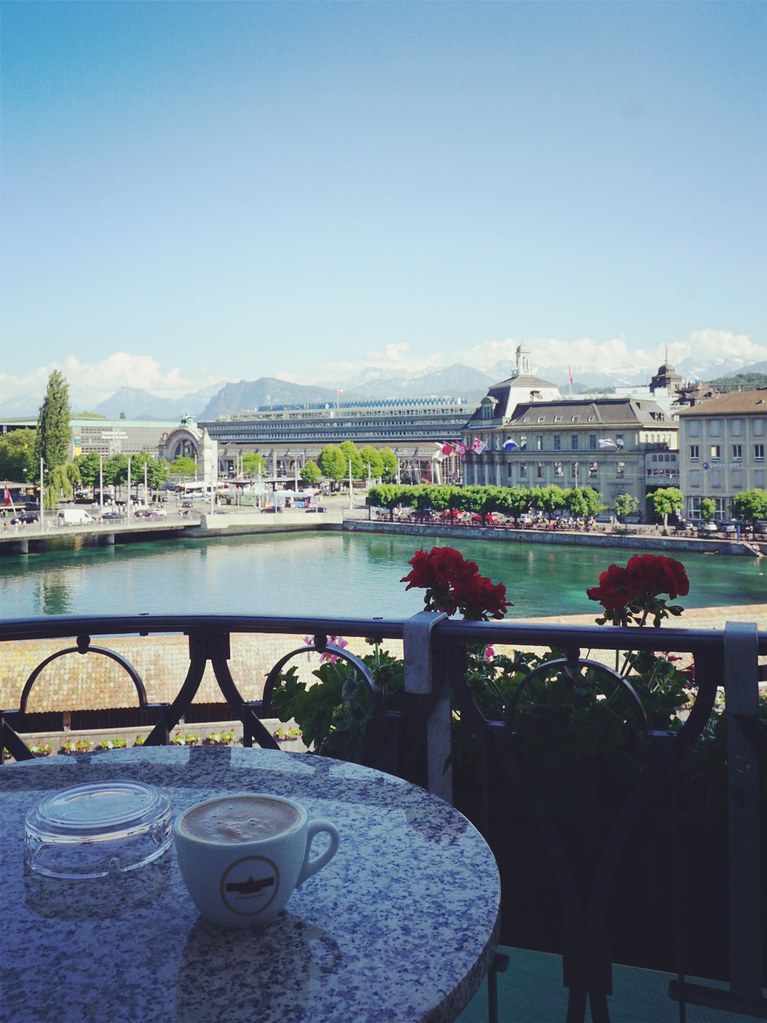 Built in the 1300s, Chapel Bridge is one of the oldest wooden bridges in Europe and among Switzerland’s best-known landmarks. The stone tower near the back used to be a water tower and also a prison for torture. Now it’s a souvenir shop. 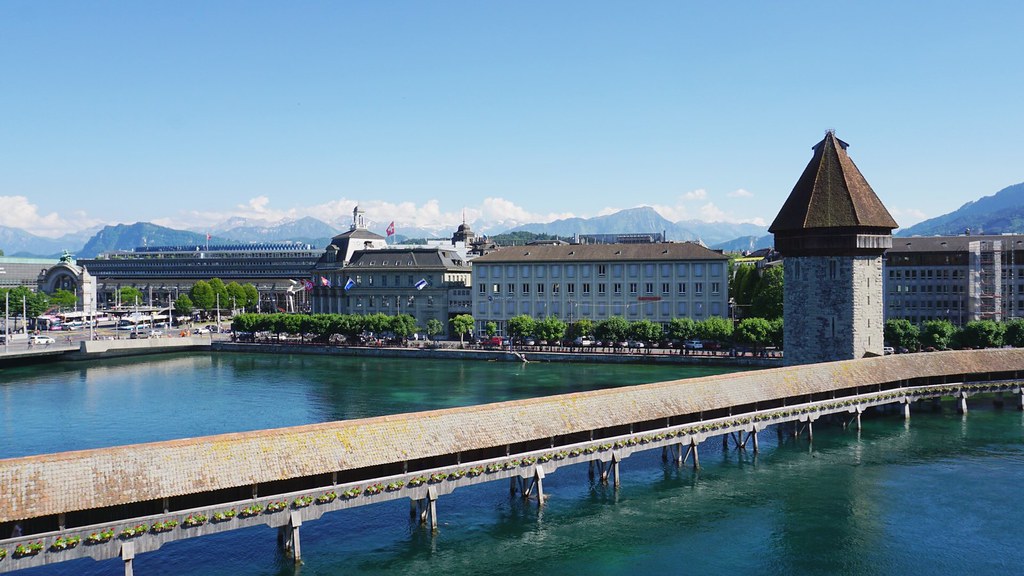 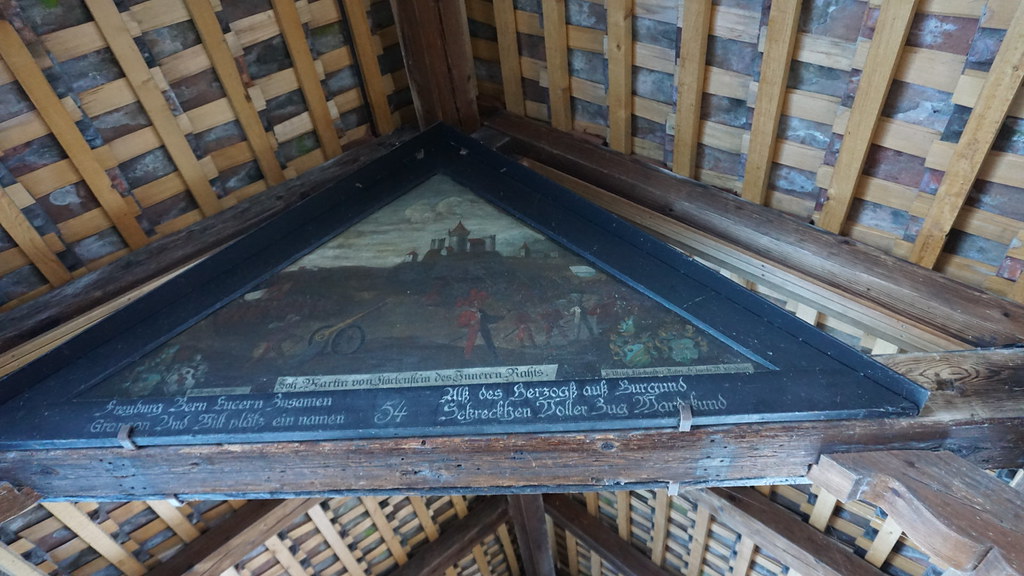 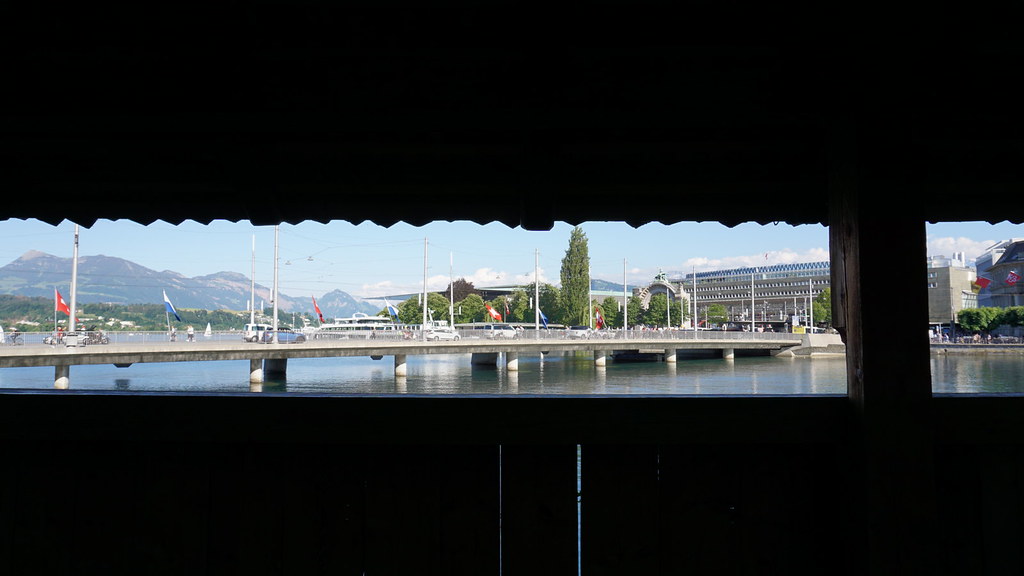 Something strange happened to me on this bridge. I was walking by myself and minding my own business when this elderly white couple passed by me, and the man turned his head no fewer than three times to just openly stare at me. It wasn’t hostile exactly, but it very much had a “WHAT THE HELL?!?!” undertone to it. What on earth could he have been thinking? “Goddammit, I thought we got rid of all the Asian tourists!”

That look made me feel super self-conscious. I wondered what could have triggered it: that I was Asian? That I was wearing a mask? And taking a photo of the bridge? Could it have been all three? Suddenly, I felt intrusive and out of place. I didn’t feel confident walking through a town square, where locals were out in full force drinking coffee, and people looked at me with curiosity. I realized that I was not just the only Asian person, but the only non-white person, period. I took a shortcut through an alley and took off my mask, stuffing it back into my bag.

I’d been planning to have a nice dinner at the hotel and even made a reservation in advance, but I ended up just getting some hot food from Migros and eating them back in my hotel room. 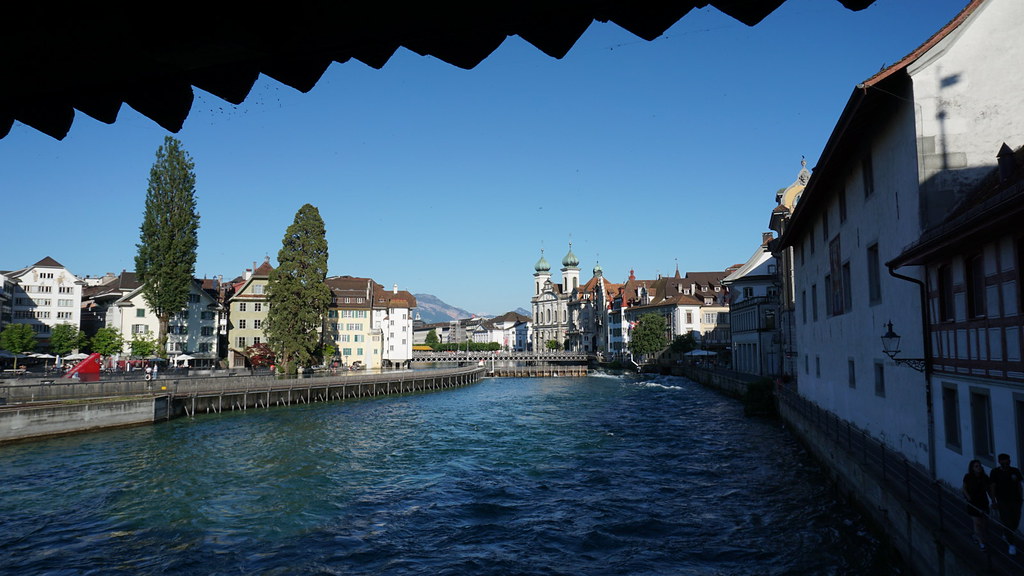 When I’d checked in the day before, the hotel had told me that breakfast would be split into two groups to abide by social distancing measures. I chose to be in the earlier group and bounded downstairs at 8am, ready to go. They showed me to my table immediately; it had already been reserved with my room number scribbled on a placard, and there were only three tables in the room, me, a French-speaking older couple, and a German-speaking older couple.

The hotel used to have a wonderful buffet selection, according to previous reviews, but for obvious reason that’s been canned. Now breakfast was a pre-made plate of five pieces of ham, three pieces of cheese, two small croissants, a glass of one of those weird chunky Swiss yogurts, and coffee and orange juice. Not exactly the feast of a lifetime, but on par with what I’ve been making at home lately (frozen bread toasted and dipped in olive oil). Credit to them for trying to make something out of the situation!

After breakfast I began a long walk around the city, starting with the riverside promenade. 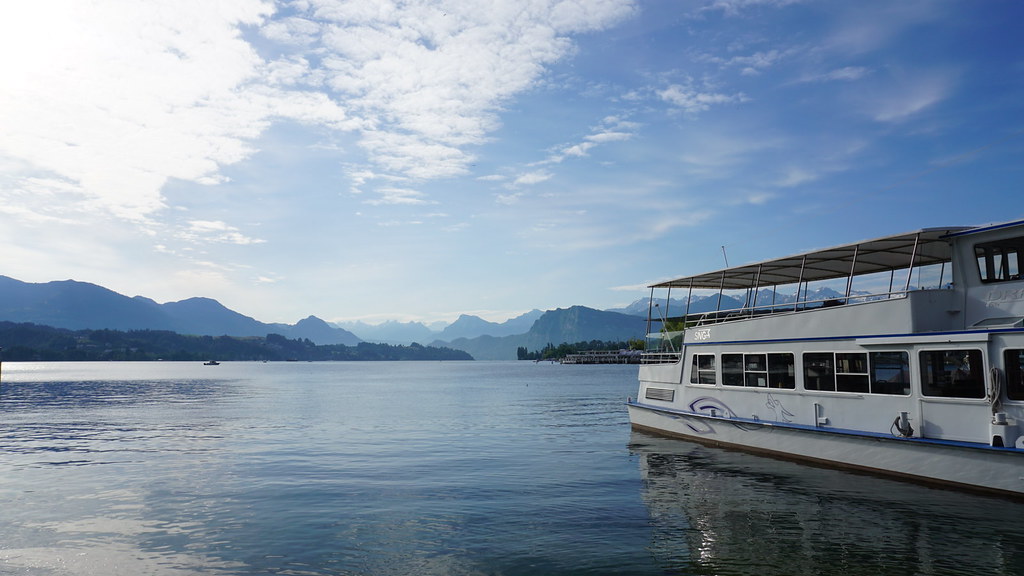 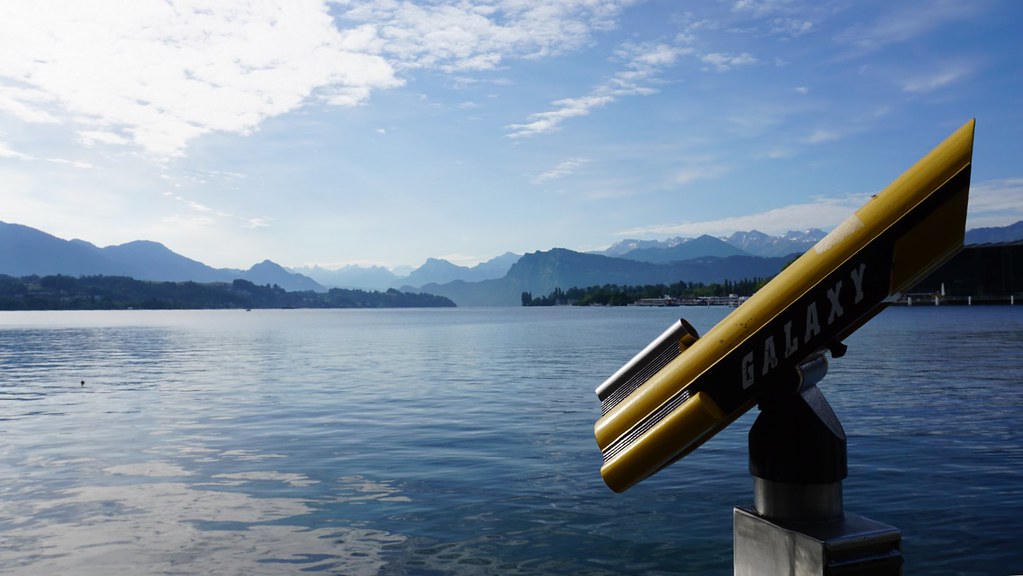 Lucerne’s famous Lion Monument was just a brief walk away. For some reason based on the pictures I’d always assumed this statue was in a national park or something, but it’s actually in a small park just off the main road, next to a museum and a cafe. It was quiet and peaceful; aside from a sanitation worker scrolling on his phone, I was the only person there. 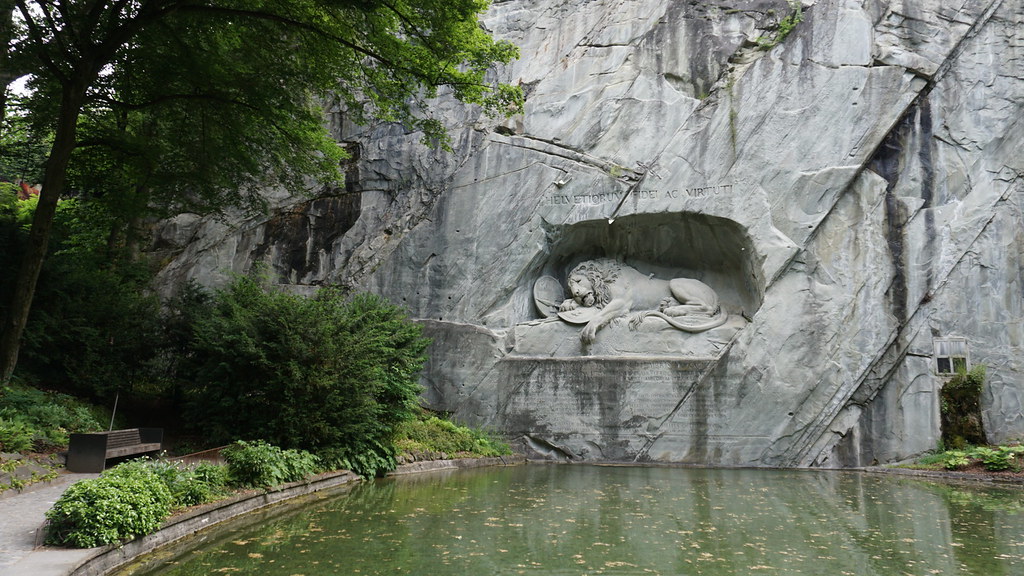 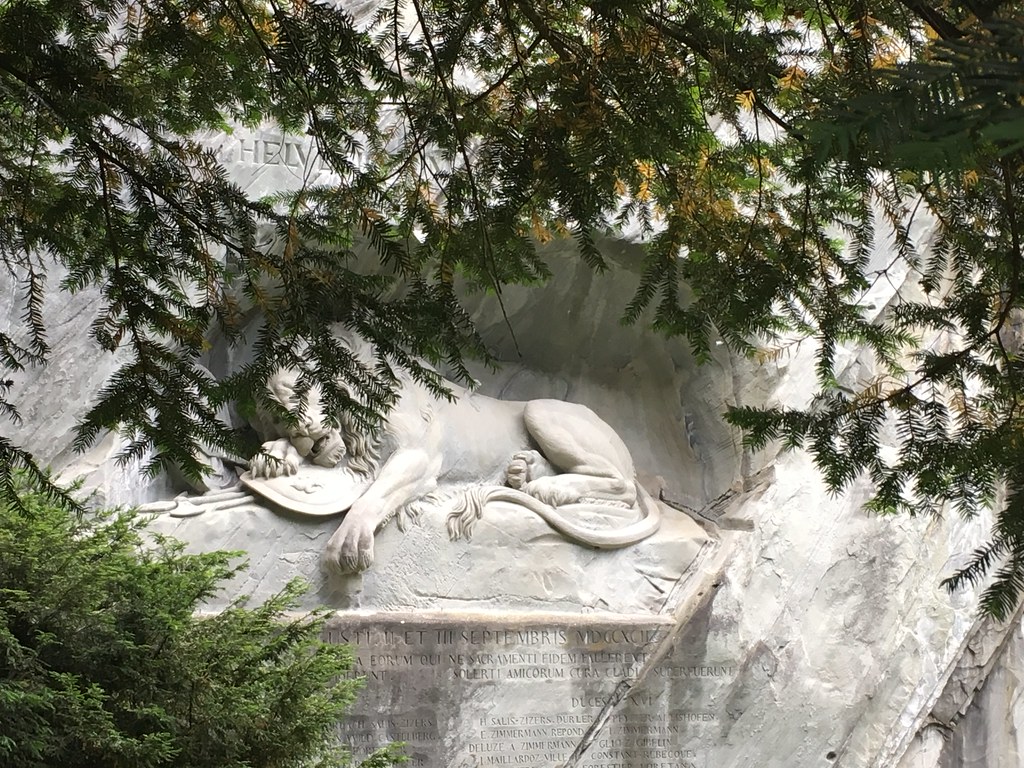 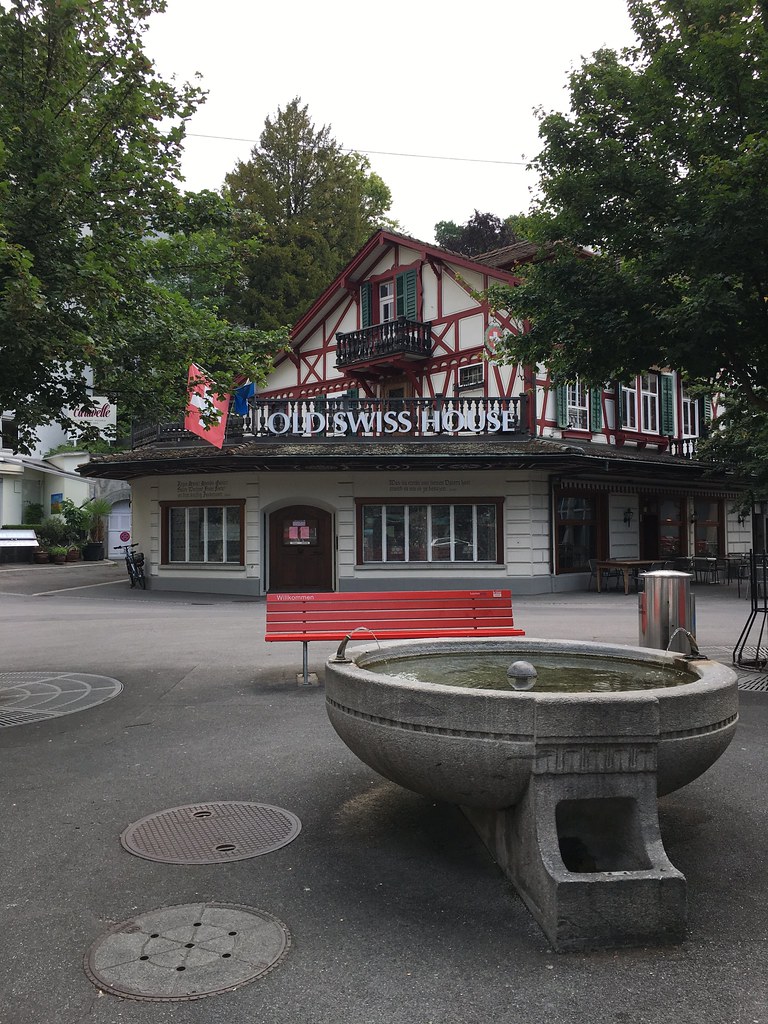 I had seen this beautiful art deco hotel called Hotel Montana at the top of the hill when I was down by the river, so I decided to hike up to see whether it had some sort of viewing terrace for the whole city. On the way, I passed by the back of the aforementioned church. The hallways were filled with these flower baskets. 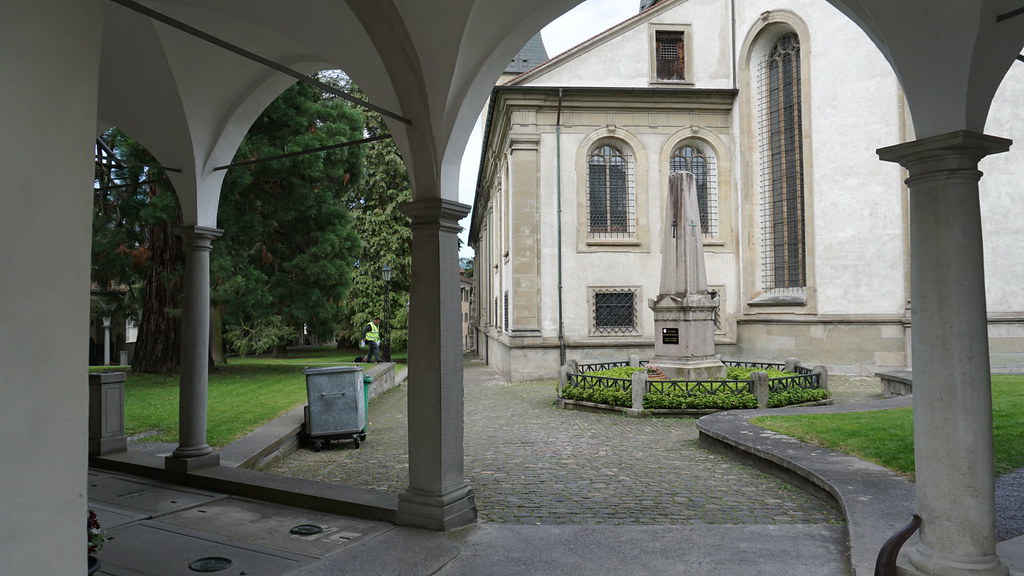 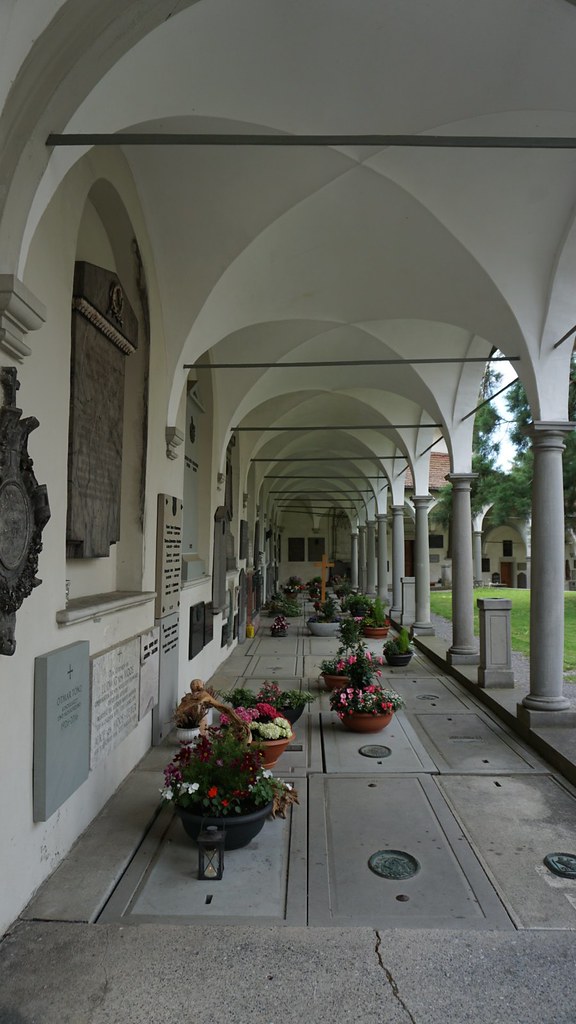 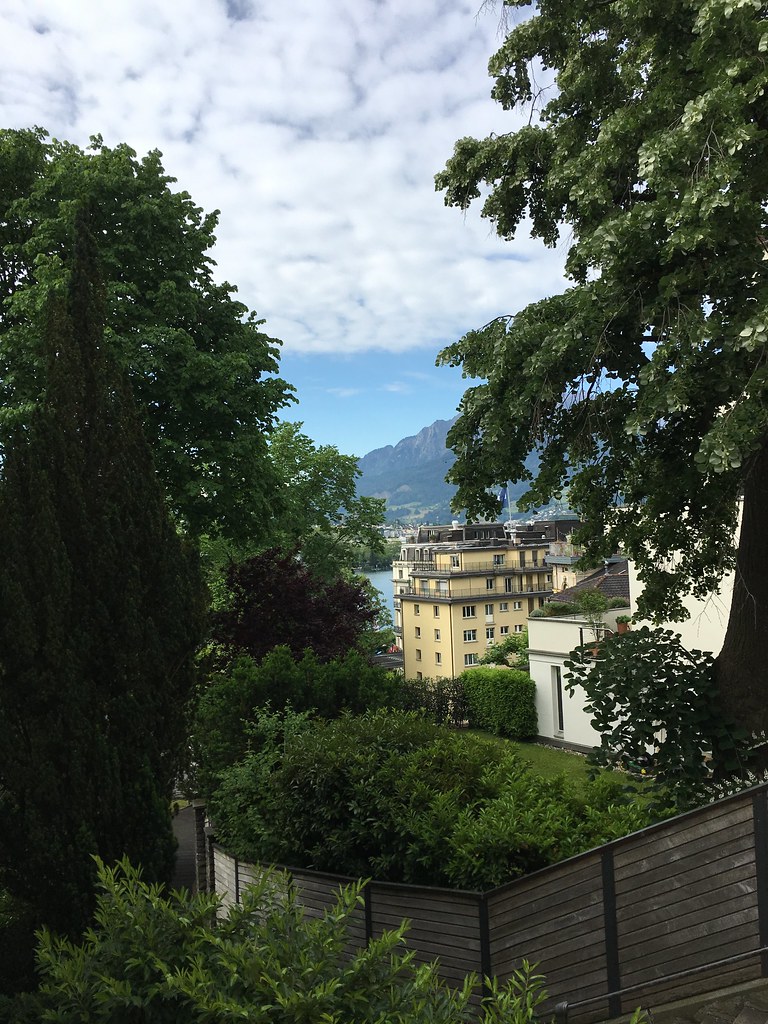 When I reached Hotel Montana, I saw that there was no publicly accessible terrace, and in fact the entire neighborhood seemed to be private mansions and gardens. I went back down the hill, heading southwest towards the old city gates. Fortunately, this time I was able to find a fantastic viewing point! 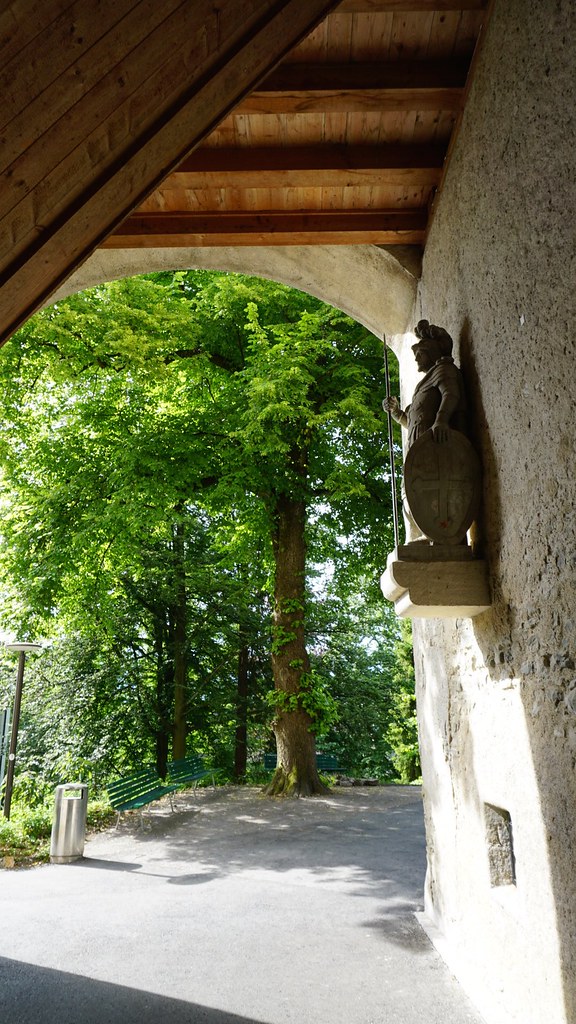 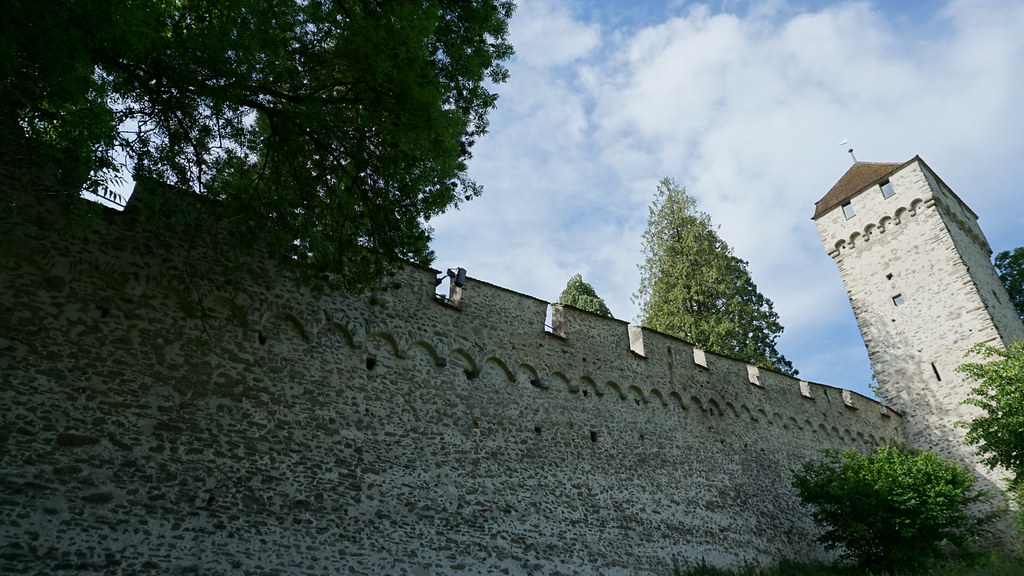 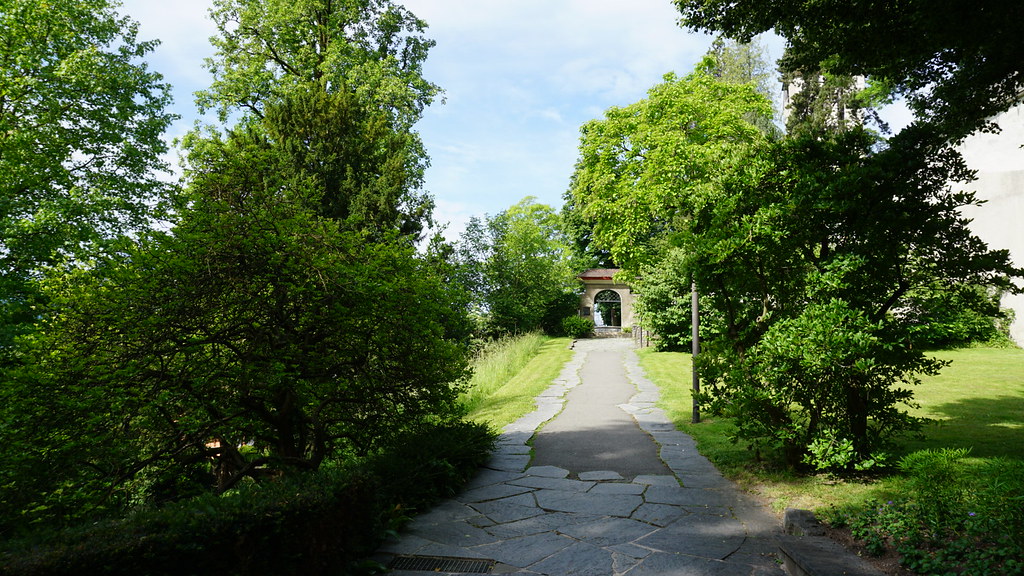 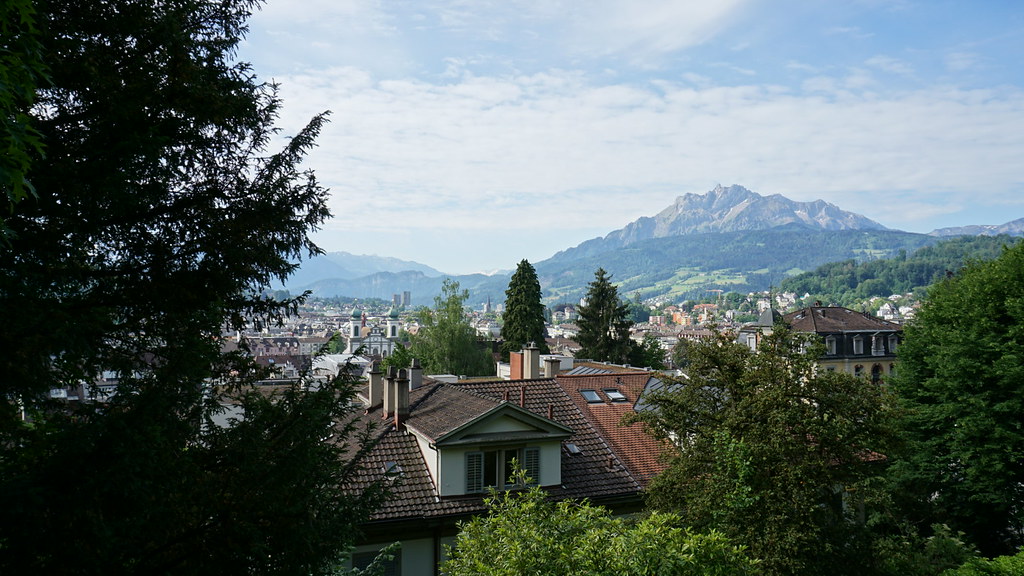 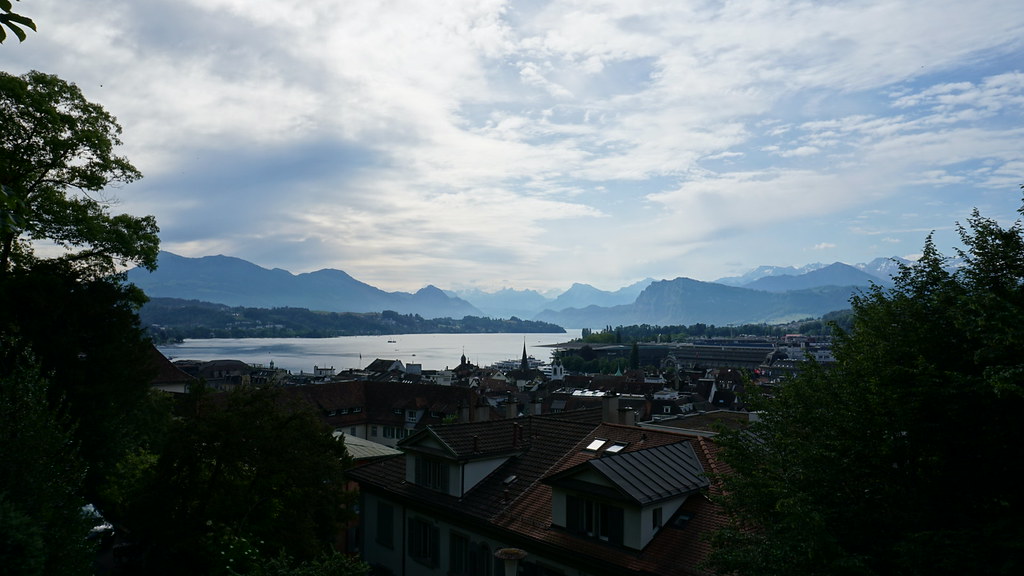 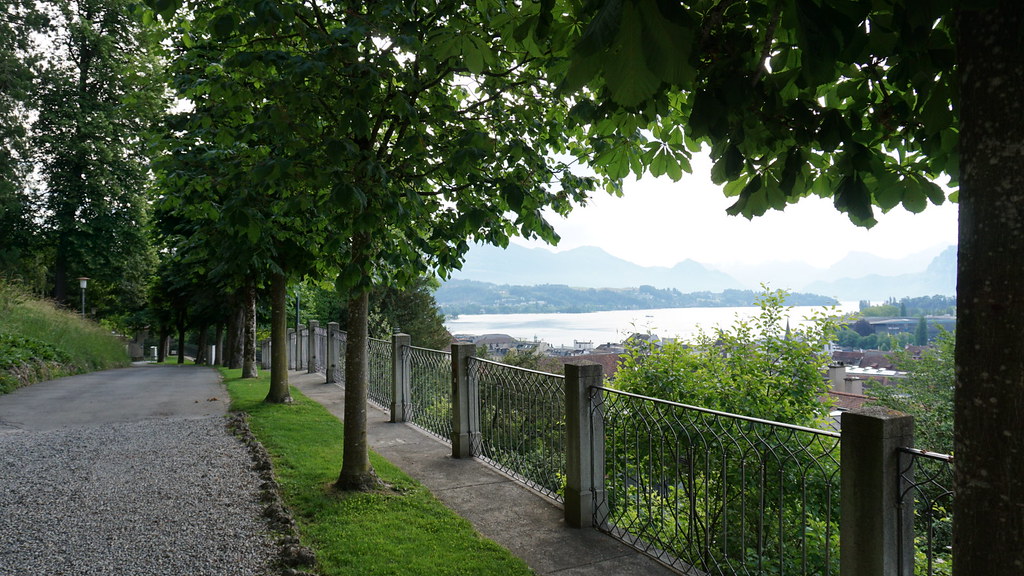 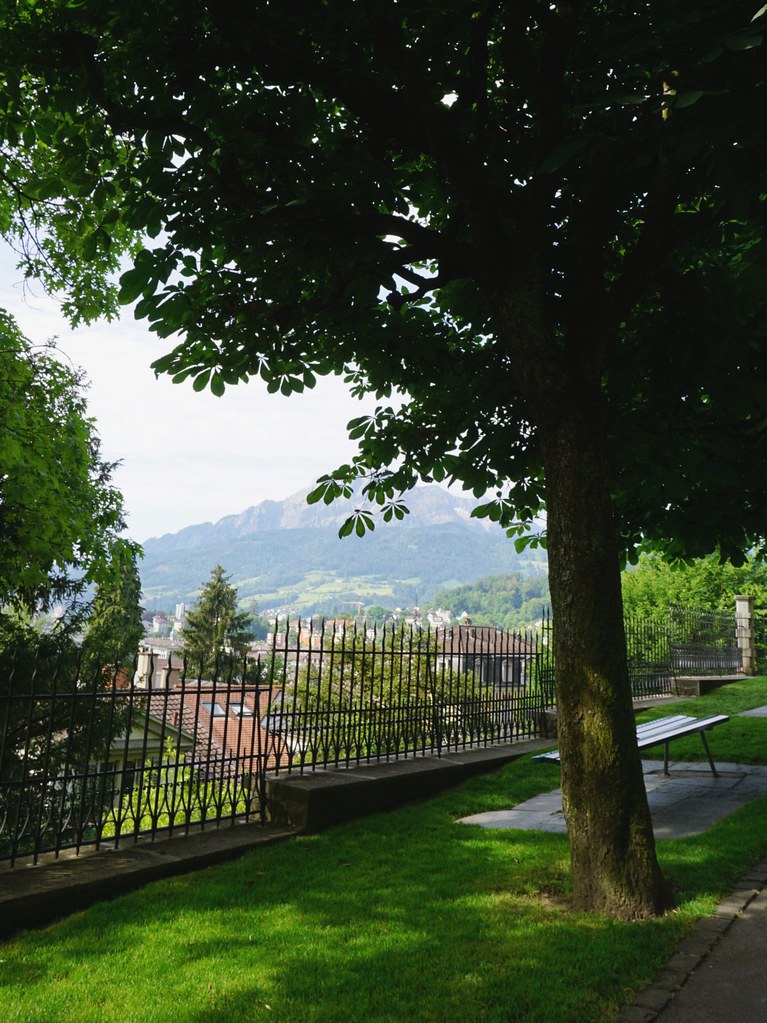 After that it was time to head back to Geneva. It was a solid 3-hour train ride, and by the time we had crossed into French-speaking Switzerland (the switch usually happens at around Fribourg/Freiburg, a bilingual town with two names), the train was starting to fill up! Someone even sat down diagonally across from me, and I adjusted my mask nervously, but then I felt silly — how much was that supposed to help, anyway? And if I was really so afraid of coming into contact with strangers, why would I be even travelling at all?

I have honestly never had this experience before: of being a lone tourist in a city that is normally visited by hundreds of thousands, a place that was once filled with bustling tourist buses and guides and cameras and laughter and voices, now reduced to shuttered souvenir shops and deserted parks and servers waiting hopefully at the doors of empty restaurants. I had the Lion Monument to myself. What a fucking bizarre time we live in, and what a privilege to be someone who can afford to hit the road right now, to not have to worry about getting sick or paying for it. I’ll never forget this.